The first thing I did with RipX DeepAudio was to drag in some well‑known tracks from my music library. There seems to be quite a lot of variation in how long the ripping process takes; on my relatively recent Mac Mini it took at least a minute per minute of recorded audio, but occasionally was much slower.

Hit’n’Mix say that the ripping quality has been improved significantly compared with the original Infinity, and I can well believe it. It’s not often that trying out a piece of software causes me to run around the building insisting that other people have to come and listen, but when I ripped the Beatles’ ‘Michelle’, I was genuinely gobsmacked by the results. The separation of Paul McCartney’s lead vocal was unbelievably good, and if not entirely free from artifacts, certainly clean enough that you could transplant it for use over another backing track. Likewise, muting the vocal left an instrumental that was surprisingly intact, and more than good enough for a rough and ready live context such as karaoke.

In short, the basic source separation is the best I’ve heard, and RipX gives you more tools than most such packages for massaging it after the fact. The fact that all processing is carried out locally rather than in the cloud is a significant plus, as is the fact that each element within the rip is presented in a musical format.

What, then, of RipX as an add‑on to your DAW? The good news is that Hit’n’Mix have improved the user interface compared with Infinity. It now feels more logical and more aligned with the conventions established by other software. There are still quirks, and I sometimes found myself wondering what had happened to my selection, or why I wasn’t hearing anything, or why playback wasn’t starting where I expected, but overall, it feels like a more mature program.

And some of its functionality is both unique and valuable within a music production context. The Sound Palette is a good example. Let’s say your are working with a bass part where the player has flubbed occasional notes: you can simply select a good note, load it into the Sound Palette and replace or draw it in as necessary. Because you can draw in a note at any pitch, it’s much faster than searching for matching notes in a DAW and pasting them in. Other functions, such as the Pattern Tool, offer real creative potential that isn’t obviously available within other programs: applying ‘vibrato’ to formant rather than pitch, for example, produces a distinctive and pretty cool effect.

At the same time, though, there are quite a few RipX functions that don’t seem to have any obvious real‑world use. The Smooth Region tool, the Randomize effect, and many of the included RipScripts left me scratching my head, and that’s by no means a complete list. It’s perhaps better to think of these as useful source code examples for people who want to write their own RipScripts than as features which will gain much traction in their own right. 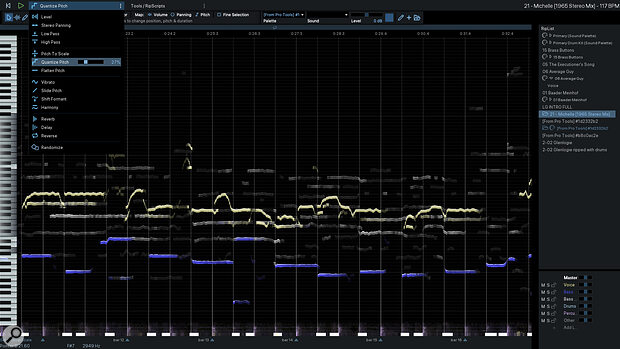 The Quantize Pitch function is typical of the tools found in this menu. It can be used for basic automated pitch correction, but offers only a degree slider and no further controls.

RipX’s functionality also overlaps that of other programs in some ways, and here I often felt that those other programs had the edge. For example, both Melodyne and RipX will allow you to open a polyphonic audio part and edit individual notes within it. I’ll admit to being more experienced with Melodyne, but even allowing for that, I think it’s harder to get good‑sounding results in RipX. Considered specifically from the point of view of a task such as pitch correction, the tools are not as sophisticated and the user interface feels less slick. That’s hardly surprising given that Melodyne has been around for 20 years, but it’s a measure of the sort of competition RipX faces in this sector. Likewise, the Harmonic Editor has much in common conceptually with Melodyne’s Sound Editor, but in practice, it’s much harder to get useful results, especially when you want to alter the character of an entire part rather than a single note.

At the moment, then, I would still turn to Melodyne first any time I needed to carry out tasks such as monophonic or polyphonic pitch correction, creative harmonic adjustment or matching the timing of parts within a multitrack. But much of this functionality is only available within the premium Studio Edition of Melodyne, which is more than twice as expensive as RipX DeepAudio — and RipX has its own killer feature in the shape of a superb source separation algorithm. The newfound integration with DAW software is very welcome and, I hope, presages further development that will increase the usefulness of RipX when working with individual source tracks. But for the time being, the ripping process itself is still the star of the show.

RipX DeepAudio has no peers in its ability to de‑compose mixed audio into editable stems. Its newfound integration with DAW software means the same process can now be easily applied to individual audio parts, raising some intriguing possibilities.