For those stuck in a rhythmic rut, WaveDNA's pattern sequencer plug-in offers some exotic creative tools with even more exotic names.

Founded in 2010, WaveDNA are a Canadian company whose first product is Liquid Rhythm. Designed to generate drum patterns or complete rhythm tracks in MIDI format, Liquid Rhythm is a dense package of unfamiliar terminology, colour-coding and hierarchical beat grouping inspired by Jackendoff and Lerdahl's Generative Theory of Tonal Music, the aim of which is to help you come up with fresh grooves for your music. Fortunately, for when it all becomes rather mind-bendingly intimidating, there's a button labelled 'Surprise Me!'. I guess the question is: does it?

Installation on the Mac requires the user to manually drag Liquid Rhythm into the application folder, and once you've followed the graphical directions, there's a fairly standard call-and-response authorisation process before you can get started.

There are a couple of skins available, both in rather tasteful pastel colours and with a clean, flat look resembling Ableton Live. This is surely no accident, because Liquid Rhythm has a closer affinity with Ableton Live 9 Suite (and Max For Live 5) than with other DAWs. If you're a Live user, you'll appreciate the integration with the MIDI contents of Liquid Rhythm's clips. Speaking as a Logic user pining for Cubase, I couldn't fail to admire the superior drum grid. You've the choice of either stand-alone operation or running as a plug-in, where you can drag and drop patterns directly onto your DAW's arrange window.

At the centre of operations is Liquid Rhythm's own arrange page, where all rhythm parts are hammered together, whether they be single-bar loops or complex symphonies of percussion. No traditional note editor is needed, because all the action takes place directly on the arrange page. A hit is represented as a diamond shape, its velocity stem hovering above. Each track represents a single drum, so it's an ideal layout for speedy pattern visualisation.

Liquid Rhythm comes with its own fairly basic drum library, and as you'll quickly exhaust the sonic possibilities, taking the 'get more kits' option is a no-brainer. It yields a few hundred megabytes of additional samples, forming a quite conservative selection. As the drums are mapped to the layout of General MIDI, it's very likely you'll export finished patterns as '.MID' files to be applied to more polished drum voices. However, you're not tied exclusively to WaveDNA's samples: user samples can be imported, and up to 10 of them layered in velocity windows for each voice. All of which is fair enough, but if it marked the extent of Liquid Rhythm's charms, I doubt our interest would be massively piqued. Happily, there's a little more to it than reassembling pre-made patterns.

Various other windows are opened as required, their names introducing us to the some of the exotic terms used throughout, including Molecule Tools, Barform Map, Beatform Map, Beat Builder and Beat Seeker. I found these were best assimilated after viewing the many short video tutorials embedded into the program, or found on the WaveDNA web site. Compared to the work-in-progress manual, they're invaluable for establishing exactly what's going on and explaining the significance of the colours and note groups.

Here's an abbreviated overview of the key terms as a flavour. First, a Beatform is a group of notes and rests, linked by colour. Blue represents groups of two events, red is used for groups of three, while purple Beatforms contain single eighth-note events. Different shadings are allocated to denote importance within the group, with the darkest indicating the 'strong' beat position. This relates to the Lerdahl and Jackendoff stuff I mentioned at the beginning, but don't panic, it only takes a short time before the colours and pattern types make a kind of sense.

A Barform contains Beatforms and is a rhythm pattern spread across a single bar, while the whole structure is known as a Music Molecule. In the interests of simplicity, that's probably enough terminology for now. Fortunately, the GUI lets you park a lot of it and let your mouse do the talking.

To make a groove from scratch, I selected a kit from the 10 initially available, picking Trance at random. The arrangement was instantly populated with tracks, one for each drum. Then, by selecting my kick's first bar and choosing a pattern from the Barform list, Liquid Rhythm rewarded me with a four-on-the-floor thump. The concept of "commonly occurring” patterns is essential to Liquid Rhythm, although the web site's claim that it provides the building blocks of 10 quadrillion of them suggests a toke too many on the old Jamaican Woodbines. If you crave more, MIDI files can be imported.

The Barform list is equipped with filters to refine selection, but if you pick All, you're tempted by 256 different kick patterns. Any that catch your eye or ear can be saved as favourites for fast retrieval. Noticing quite a few red triplets tossed around, 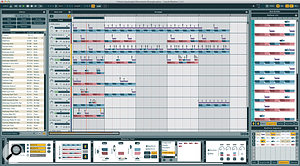 I questioned the source of the grooves and learned that "They consist of all the possible patterns of activity at the level of eighth-notes separated into four different grouping patterns that result from combinations of two and three eighth notes.”

Having loaded a pattern, you can modify its events directly with the mouse or continue with the same per-instrument process of populating bars, adding snare, hi-hats, percussion and so on. If you discover a pattern that sounds promising, the Similar filter can be used to highlight others with a similar feel. In this way you can assemble the supplied building blocks into a longer structure, pulling in variations as necessary.

Instead of constructing beats this way, you can also grab complete loops, auditioning them on any of the available kits. When loaded, a loop is split into individual instruments, ready for further tweaking. If the kick doesn't sound quite right, there's a straightforward mechanism to replace it — or any individual drum — with another from the (short) list, although there's no equivalent means of replacing the entire kit. The mixer is a basic level-and-pan affair. Any kind of EQ or effect processing is therefore accomplished at DAW level by means of Liquid Rhythm's 16 mono outputs or eight stereo outs. Alternatively, the audio export option will deliver loops either in complete mix format or split into tracks.

The 'Surprise Me!' randomiser button is a powerful but simple operation involving four sliders and tick boxes. Until you master its juggling of notes and their timing, each press can lead to a wonderful accident or percussive havoc. When generating notes on multiple simultaneous tracks, 'collaborate' reduces clutter at a stroke by blocking the creation of strikes on the same beat. This makes it particularly effective for fills, hi-hat patterns and all kinds of hand percussion. Further modification of this better-than-average randomiser can be found in drop-down menus to the right of the sliders. Of these, my favourite was the imposition of a selection of velocity patterns on the notes created: for instance, if you choose a sawtooth pattern, the notes in the group get progressively quieter.

The remaining tools cover the manipulation of velocities and timings according to the colour-coding already described. I'd be hard pressed to name any software with such a mind-boggling catalogue of options for hurling notes around a bar. I'd be equally hard-pressed to guess which jukebox provided the sources for Beat Seeker — "an intelligent algorithm that highlights the most commonly occurring patterns for whatever instrument you're working on”. Apparently, "Our team of astute scientists studied several hundred songs from a variety of genres (hip-hop, D&B, trance, house, rock, metal, jazz, to name a few) to put this feature together.”

Ultimately, when you get beyond the fancy terminology, Liquid Rhythm is broadly similar in concept to Apple Loops. With one click you summon a kick pattern, with another a snare, then congas, shakers, hi-hats and so on until you have a complete rhythm section. Patterns are easily arranged into longer structures and where Liquid Rhythm scores is by offering in-depth adjustment and easily generated variations. Its most interesting results come from the intelligent randomisation and humanisation tools.

However, despite an earnest scientific approach, it isn't yet the perfect all-rounder for generating MIDI drum loops. With a current limitation to 4/4 time signatures and a tendency to crash occasionally, there's scope for development. Some aspects seem too complex while, perversely enough, others are too simplistic. The included kits, for example, are probably best taken as placeholders for the patterns you'll export to your DAW — but if this doesn't already have a slick drum editor, Liquid Rhythm could make a big impression. Ultimately, if you find the tools, concepts or use of colour intriguing, why not take the 30-day trial and see if Liquid Rhythm is for you?

If the full version of Liquid Rhythm is beyond your reach, WaveDNA also market a cut-down Intro edition for less than half the price. This includes most of the core features, but lacks the Randomiser and several other advanced beat-manipulation options.

An alternate approach to beat generation suited to newcomers and anyone seeking familiar-sounding drum parts to be easily customised.