Stereo sound is a surprisingly subtle and complex business, and it's rare that the typical DAW 'utility' plug‑ins will deal with all manipulation and enhancement tasks. For more sophistication, you need to look to third‑party offerings.

At first sight, Waves' Center appears similar to PSP Audioware's StereoController, Brainworx's bx_control, Voxengo's excellent freeware MSED and indeed Waves' own S1 Imager, all of which employ M/S (Middle & Sides) techniques to control perceived stereo width or skew the image. Like them it's mostly intended for use on master faders, or during mastering, rather than on individual tracks. However, it turns out Center is a rather different animal, with a singular purpose: to independently adjust the level of the Middle and Sides components of stereo material. That sounds like it ought to be common in the plug‑in world, but really isn't!

I tested Center on a range of my own as well as commercial mixes, with mostly impressive results. The stereo image can be enhanced or narrowed (all the way to mono) using the Sides fader. Equally, anything centre‑panned can be boosted, cut, or even completely removed using the Center fader. The exact outcome is very dependent on the qualities of the mix you're treating, and you'll often hear ghostly remains of removed centre content where (for example) use of reverb originally spread it out into the sides. The effect almost always remains coherent and natural‑sounding, though, and isn't a weakness of the plug‑in itself.

The Low, High and Punch knobs restore bass, treble and transients (respectively) that might otherwise be lost through a drastic Mid or Sides cut. For instance, if you zap a vocal with the Center fader, you might find that a centre‑panned bass guitar also disappears. In that case, turning the Low knob towards 'Sides' selectively leaks low‑frequency content from the original input into the Sides signal that remains, restoring the bass to the mix. Conversely, if wide‑panned hi‑hats disappear when you cut the Sides level, a turn of the High knob will deal with that. Likewise, Punch's role is to restore lost transients and upper‑mid content, which it does very effectively. 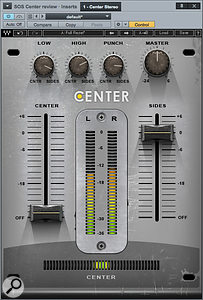 Applications for Center are surprisingly varied. Its usually excellent sonic manners could see it polishing classical masters, while that potent centre cut in particular should interest pop remixers and DJs who need to surgically remove mix elements. The addition of some image-tilt facilities would have made Center into more of a one‑stop‑shop for stereo processing, but might have detracted from its notable ease of use.

Some Internet forum discussion has questioned whether Center isn't just another M/S processor, and I was curious to get to the bottom of this for myself. Hours of comparative listening and staring at goniometers and correlation meters later, I'd have to conclude M/S is involved, but there are many other tricks afoot, not least adaptive dynamic processing and multi‑band techniques. That much becomes clear when you use it on an MP3, or some harmonically very complex sources (think steel‑string guitar or harpsichord), where lone Mid or Sides components can pump and warble in a most unexpected way. However, typical Sides‑only signals retain fine phase correlation (and hence mono compatibility), which is a trick you'd struggle to pull off using M/S tools alone.

Whilst its workings might remain mysterious, and it's not totally foolproof, Center gets a hearty recommendation from me. The list price of $250 is steep, but it can frequently be found heavily discounted, and it's included in several Waves plug‑in bundles, in which context it's great value. Robin Bigwood