Waves' take on the immortal Neve 1073 design sees them teaming up once again with a leading mix engineer.

There are many emulations of the classic Neve 1073 preamplifier and equaliser, and with the new Scheps 73 plug-in, Waves are the latest company to throw a hat into this particular ring. They have followed their now-familiar route of personalising the plug-in by involving a top engineer, in this case world-class mixer Andrew Scheps (Adele, Red Hot Chili Peppers, Jay-Z). The plug-in is thus modelled on Scheps's own Neve 1073, and is said to precisely emulate its behaviour. Like the original, the plug-in has a fixed 12kHz high-frequency shelving EQ band plus low-frequency shelving and mid-range 'bell' bands with switchable centre frequencies, as well as an 18dB-per-octave high-pass filter. However, Waves' plug-in also introduces a 10kHz mid-range band that was apparently featured on the original schematics but did not make it into production models until the development of the later 1078 channel strip.

When the Scheps 73 plug-in is used on a stereo source, you have the option of applying different EQ settings to the left and right channels, and there's also an M/S matrix which lets you treat the Mid and Sides stereo content differently. Waves have also modelled the original Marinair transformer and its unique sonic characteristics, so you can overdrive the preamp to introduce harmonic distortion and saturation tones. These have been tweaked by Mr Scheps and contribute greatly to the authentic character of this plug in.

My flying time on a 1073-equipped console comprises hours rather than days, but the EQ in my own Amek console is a Neve design, and I do have expectations of what it can and should achieve! I expect that some engineers will be appalled by the apparent lack of flexibility: how can you expect to get good results on everything when you have no choice as to where the high-frequency shelf kicks in, no bandwidth controls, and only a handful of fixed frequency choices for the other bands? Well, that was what Rupert Neve came up with, and I have rarely found it a problem for 95 percent of all tasks. In fact, I find that having your options limited in this way frees you up to make decisions elsewhere. Rather than agonising over frequency points and watching graphic representations of your sound, you just turn the knobs and listen. Likewise, I like the fact that the low and mid-range bands don't overlap, with the mid-band starting at 360Hz. Of course you will be boosting or attenuating over an increasingly wide band so they will overlap at extremes, but I never feel I am missing any options.

It was apparent from the first time I inserted the Scheps 73 plug-in on a channel that the EQ section is great. It is by turns warm, bright, musical and forgiving and a pleasure to use. I felt at home straight away, and it responded exactly how I expected. Adding a shelving high-frequency boost lifts the top in a pleasant, musical way, while rolling a bit of low end off tightens the sound nicely. Likewise, the mid-range controls did what I expected. 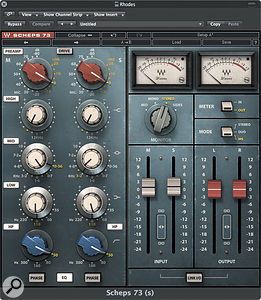 All this sounds pretty straightforward, but I should point out that in the world of plug-ins this is not my usual experience. I was brought up on EQ like this, in the analogue domain, where to a certain extent I still work. Most plug-ins I have experienced that mimic analogue EQ fall short in some way. Some have to be tweaked to extremes just to produce an audible result. The Scheps plug-in, however, can be gently coaxed into use, with only a small amount of cut or boost resulting in the sort of change I was looking for. For me, it's a relief just to have a high-pass filter with four frequency choices that react like I expect them to!

An EQ For All Seasons

I tried the Scheps 73 plug-in on various tasks, from vocals to drums, subgroups and full mixes. The first application I tried was to tame a boomy low end on a live recording from the cavernous Brixton Academy. High-pass filtering and rolling off some low end with the shelving band retained the warmth but left a nicely controlled low end. It didn't make the sound harsh, and by applying some upper-mid boost, I was able to add a bit of crispness to the sound without it all becoming harsh.

When I used Scheps 73 on individual instruments, it quickly showed itself an adaptable tool. I used the M/S option on a Fender Rhodes part that I wanted to make less weighty. By just removing some low-mids from the Middle channel, and adding a bit of high-mid brightness just to the Sides, I was able to free up some space for the vocal and accentuate its stereo width, but without losing the characteristic sound of the part. You can hear the results by listening to the audio files that accompany this review. I have also provided some vocal examples, where I was trying to increase the huskiness of the singer by boosting at 3.2kHz. Most plug-ins would sound harsh and metallic in this role, but the Scheps 73 was fine, as I hope you can hear.

The preamp section provides the opportunity to add a bit more character, as you can simulate saturating the transformer and thus adding some harmonic distortion to the sound. Switching in the Drive button enhances the overdrive potential. A handy feature here is the ability to link the input and output faders to maintain unity gain through the plug-in. By automatically decreasing the output fader as you increase the input level, you can compare different Drive settings without changing the overall gain. Once you get the sound you are after you can, of course, unlink the faders and make adjustments individually, but this certainly saves time and overdriven monitors!

The small VU meters can be set to either show the input or output level of the plug-in. The preamp section, as well as the individual equaliser bands, can be switched in and out. This is a handy feature as you can compare what you are doing without having to bypass the whole unit. I did, however, find the status of the bypass buttons a bit difficult to see.

So is this a plug-in worth investing in? For me, the exactness with which Waves have recreated the original is less important than the question of whether they've managed to create a flexible workhorse plug-in that I will use enough to justify its not inconsiderable cost. My bottom line is always to ask myself how much use something will get — and I have already adopted this plug-in as one of my go-to equalisers for standard channel use. It would be just as comfortable in a mastering role. If you consider your DAW as a configurable mixing desk, then you could do a lot worse than having a Scheps 73 on each channel!

Waves and Andrew Scheps have honoured the Neve tradition with a sympathetic recreation of the classic 1073 that has bags of character.