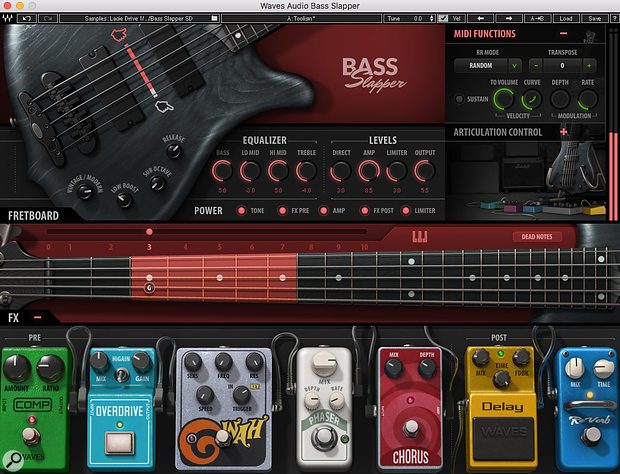 For some musicians, slapped bass is a little like Marmite (or Vegemite, depending on where you live in the world); you either love it or you hate it. If you happen to fall into the former group then Waves’ latest virtual instrument — Bass Slapper —– might appeal. Bass Slapper is a stand-alone and plug-in (VST, AU, AAX) virtual instrument that, with just a little bit of practice, will allow you to give the likes of Stanley Clarke, Bootsy Collins or Mark King a run for their money. The instrument is built upon a 5GB multi-sampled library (although there is a 1GB compact version if storage space is tight) and this includes a range of performance articulations that allow you to generate the full melodic and percussive character of this style of playing via your MIDI controller.

The front-end has plenty going on and, given the modest asking price (even more modest if you manage to pick it up in one of Waves’ regular sale events), Bass Slapper is pretty feature-rich. As indicated by the bass graphic top-left, the instrument is built around samples from a five-string electric bass. The instrument graphic includes a number of controls that influence the performance and tonal characteristics. For example, under the stings is a slider that controls which strings are slapped (simulating what the thumb would do) and which are pulled (simulating what a finger would do). Like the majority of the controls in the UI, this offers MIDI Learn if you want to automate the setting from your MIDI controller or DAW. The other four knobs do pretty much what their labels suggest, so you can dial in warm vintage or crisp modern, add some low boost, add a sub-octave or blend in the release-noise samples to taste.

The Equaliser and Levels sections influence the built-in amp simulation (although you don’t get a choice of amp and cab types) and, as well as basic EQ, allow you to blend the drive and amplified sounds, control how hard the final limiter is driven and set the overall output level. You can also power on/off each of the major signal chain components.

At the base of the UI, you can open a further panel to show the virtual pedal board. The effects here are divided into pre and post (relative to the amp modelling) and provide a fixed chain of compressor, overdrive, wah, phaser and chorus (all pre the amp) and delay and reverb (post the amp). No, you can’t adjust the running order or pick alternative pedals, but this is a pretty flexible and sensible selection and each features useful control options. Bar the compressor, all also feature a Mix control so you can blend in just as much of each effect as you need. Again, all the controls offer MIDI Learn. I particularly liked the Overdrive, which does an excellent job of going from super clean through to gnarly distortion with lots of subtle stops along the way.

Top-right are panels for configuring the MIDI operation (for example, setting the velocity curve response and MIDI transpose) and adjusting some aspects of the articulation response of the sample engine. This includes a number of options for adjusting how legato and open strings are handled. This section also includes a Position switch and this relates to the final element of the UI; the fingerboard display. This contains a moveable ‘red zone’ just above the fretboard. The position of this red zone can be moved via the slider and is used to control where your fingering hand is placed on the virtual neck to select notes, although the engine is obviously smart enough to reach outside this zone if it can’t find the required pitch within it. The position slider also includes MIDI Learn so, if you want to control this in real time — and get the tonal variations that playing notes on different part of the neck can bring — then that’s easy to do.

The small piano keyboard icon in the fingerboard section of the screen pops open the Keyswitch Editor and it’s here that you can change the default articulation keyswitches if you need to. The range of articulations is particularly impressive, with plenty of options for dead notes, mutes, open strings, harmonics and slides of various styles and speeds. Most users might never need to delve, but the more geeky users will really appreciate the possibilities offered.

Of course, all this technical wizardry is only worthwhile if it results in some useable sounds. Thankfully, Waves have delivered on this front also and, while a love of slap bass is not a universal thing, Bass Slapper’s sonics are more than a match for its technical capabilities. Yes, it does take some practice to turn your keyboard skills into a convincing slap bass performance, but the same is true of any keyswitched, multi-articulation, virtual instrument. That said, a little bit of practice goes a long way and I was soon creating bass lines that I know my limited bass playing skills could not reproduce.

There are a number of other excellent virtual bass guitar instruments out there including, for example, IK Multimedia’s very impressive Modo Bass. This includes slap playing among its suite of playing styles but, at €359.99, it is considerably more expensive than Bass Slapper, albeit more versatile. So, while slap bass might be a niche sound, if it’s a niche you have use for, then Bass Slapper is a great technical solution and represents excellent value for money.