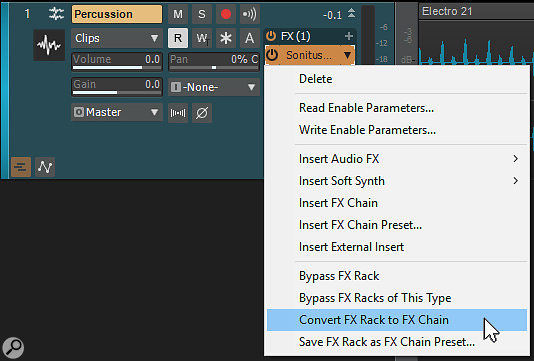 You can assign up to four parameters to each control.

Save time and screen space by combining multiple plug-ins into FX Chains in Cakewalk.

Cakewalk by BandLab (Cakewalk for short) continues to be updated. April added the ability to apply Track Template settings to an existing track, along with a dark Piano Roll View (PRV) for the Tungsten theme. May offered more PRV enhancements, and fulfilled two oft-requested features — coloured track strips for the Tungsten theme, and phase and stereo/mono interleave buttons in Track View. There were also 24 bug fixes, some of which have been long-standing irritations (like MIDI ports re-ordering when enabling a device with the project open, and some ripple edit glitches). Not bad for a free program!

I never really covered FX Chains in depth when writing about Sonar, so let’s re-visit one of Sonar’s most useful features. I’ve always been a DIY kinda guy so I could make devices that fit my exact needs, and FX Chains are much in the same vein. They provide three main functions:

An FX Chain can incorporate any number of effects in series. Its front panel offers six assignable ‘macro knobs’ and six assignable switches (knobs and switches can control up to four parameters each), and level sliders and meters for both the input and output. You can also create your own custom panel graphics. 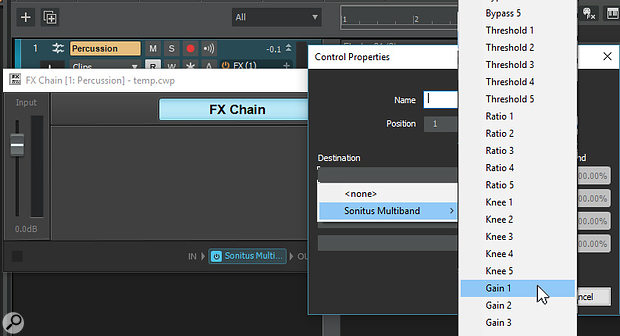 The first step is to convert the FX Rack into an FX Chain.

Suppose you’d like a five-band graphic equaliser plug-in to make quick EQ adjustments. The Sonitus Multiband can provide a graphic equalizer’s functionality, but its interface has a lot of clutter if that’s all you want to do. Insert the Sonitus Multiband into the FX Rack, then click on the effect’s downward pointing arrow (Show Rack Menu) or right-click on the effect. Choose Convert FX Rack to FX Chain, and an FX Chain replaces any previously loaded effects. Double-click on it to open the FX Chain panel and do control assignments. 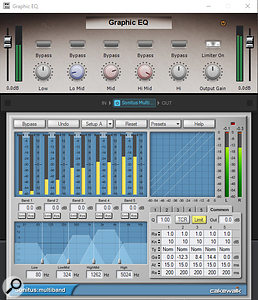 This FX Chain transforms the Sonitus:Multiband compressor into a five-band graphic EQ. Note the custom UI — even the knobs have been customised so that boosting turns the knobs more red, and cutting turns them blue.When the blank FX Chain panel appears, right-click on it and choose from Add Knob, Add Button, Customize UI, or Save FX Chain Preset. If you choose Add Knob, a dialogue box appears for choosing the knob’s Destination (ie. effect parameter), control start/end points (so an FX Chain knob doesn’t have to cover a parameter’s full range), a knob label that shows on the front panel, and the knob position in the row of possible knobs (from 1 on the left to 6 on the right). For example, with the graphic EQ FX Chain, you’d assign five knobs to the Gain controls for the five bands. You can assign five switches to each band’s Bypass parameter to hear the effect that enabling a particular band has on the sound. Assigning the sixth knob to Output Gain, and the sixth switch to Limiter On, are useful options.

Of course you could forego the FX Chain and just make adjustments on the Multiband, but as you work with FX Chains you’ll find they can be huge time-savers. For example, the Sonitus:Surround plug-in can do simultaneous vibrato and tremolo, even though that’s simply a serendipitous side-effect of the plug-in’s intended purpose. But the adjustments you need to make are super-precise, like varying a control between 0 and 5 percent of its travel. It’s much easier to make precise settings when you assign that parameter to an FX Chain knob where the knob covers a small parameter range over its entire rotation. With our graphic equaliser, you want the Multiband settings to defeat compression so it can function as an EQ; saving the chain saves all the associated Multiband settings. Furthermore, an FX Chain’s controls are easily accessible, and completely unambiguous. The FX Chain also takes up less space than the Multiband GUI because we don’t need all its parameters.

Save your FX Chain after creating it. Right-click on an FX Chain to view several possible actions, including Rename FX Chain, Extract FX Chain plug-ins (i.e., remove all FX Chain assignments and revert to the original set of effects in the FX Rack), and Save FX Rack as FX Chain. You can also click on the FX Chain front panel and choose Save FX Chain Preset to preserve any changes you make.

Chairman Of The Board 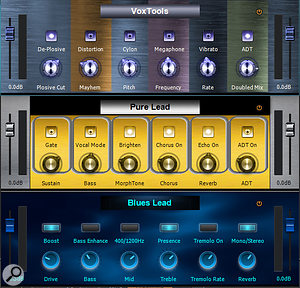 Three virtual pedalboards made with FX Chains.I’ve yet to find a limit on how many effects you can insert in an FX Chain...but it’s a lot! So you can create the equivalent of a pedalboard that combines multiple effects (whose open windows would normally take up a huge amount of screen space) into a compact FX Chain with a streamlined user interface. Referring to the screenshot, VoxTools combines stacked high-pass filters for a virtual pop filter, Mayhem includes amp distortion, Cylon uses a flanger with no modulation, Megaphone has a peaking EQ, Vibrato distills the Sonitus Modulation FX into a vibrato, and ADT optimises the Sonitus Modulation plug-in for an ADT effect. Because each knob can control multiple parameters, it’s easy to make one-knob effects.

The Pure Lead pedalboard wraps a bunch of processors around TH3 Cakewalk, including a compressor for sustain, a ‘vocal mode’ switch that introduces a shallow cut in the vocal frequency range, a morphing tone control, reverb, echo, chorus, and doubling. Blues Lead brings out the most important controls from a TH3 Cakewalk preset but adds Tremolo and a spring reverb effect.

One reason people like the ProChannel is that the unified interface eliminates the need to open FX Rack effects windows all over your screen. This is particularly important for an effect like a Pro Tools-style channel panner, where you might want this kind of utilitarian effect on multiple channels. 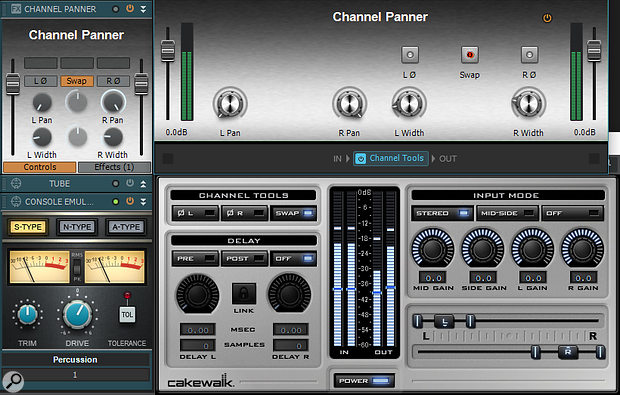 Because any plug-in can be inserted in an FX Chain, dragging an FX Chain into the ProChannel turns any VST or DirectX plug-in into a ProChannel effect.

Although at the time of writing this Channel Tools is not included with Cakewalk, I suspect it will be available at some point and it’s ideal for this application (it’s applicable to anyone who used Sonar Platinum, because any Platinum plug-ins remain installed after installing Cakewalk). The screenshot above shows the Channel Panner FX Chain in the upper right. It allows independent right and left channel control over panning, phase and width. You can also swap the left and right channels. Channel Tools itself is in the lower right, and the upper left shows what happens when you drag the Channel Panner FX Chain into the ProChannel. You still have access to all the knobs and switches, but in a smaller space.

You can change the text colour for presets and labels, and the fader caps, knobs, buttons, front panel, and preset background can all have custom graphics. Some are supplied with Cakewalk at C:\Cakewalk Content\Cakewalk Core\FX Chain Graphics, but you can also create your own graphics using PNG, BMP, JPG, GIF, or TIF image formats.

The front panel size is 600 x 187 pixels, the fader cap 22 x 37 pixels, and the preset background 186 x 32 pixels. However, you can insert any size graphic, because it will stretch or shrink to fit in the available space. Sometimes, using the ‘wrong’ size gives cooler results than the official sizes.

The knobs are hard to customise because you need to create all the rotation positions for each knob. I find it easier just to load an existing knob file in a program like GIMP 2 and use tools like colorisation, or gradients that go from one end of the knob graphic to the other end. This creates different shadings as you turn the knob. Fun stuff, eh?