Waves' latest plug‑in collection attempts to bottle the genius of Eddie Kramer, for our benefit! 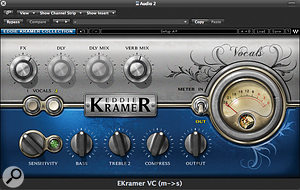 A few months ago we reviewed the Tony Maserati 'signature series' plug‑in collection from Waves (April 2009: /sos/apr09/articles/maserati.htm), and their Eddie Kramer Collection follows in a similar vein. The concept, in both cases, is that the producer's favoured signal chains for specific applications are recreated in a single‑window interface format. Only the controls they actually use are made visible, so tweaking the sound becomes as simple as possible. Eddie Kramer is probably best known for his work with Jimi Hendrix and other 'golden era' legends such as Led Zeppelin, Kiss, the Beatles and David Bowie, but he's still working full‑time, applying his expertise to today's bands. 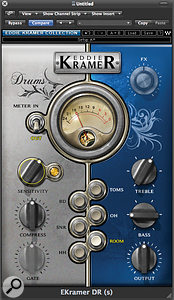 The Eddie Kramer Collection comprises five application‑specific plug‑ins targeting guitar, drums, vocals, bass and special effects. As with the Maserati Collection, the five plug‑in interfaces have a distinctive visual style and operate at up to 24‑bit/96kHz resolution, with Mac and PC support for the RTAS, Audio Suite, VST and AU standard. The Eddie Kramer Collection is native‑only, and is protected by iLok authorisation. All the standard Waves save, load and compare options are supported.

As with the Maserati bundle, each plug‑in has a Sensitivity knob and coloured light for optimising the input level. Getting the light to flash orange on the peaks indicates a suitable input level. There's also a round retro‑style meter in the middle of the plug‑in window for getting a more accurate idea of how the levels are behaving.

The Vocal Channel plug‑in offers two types of vocal processing, designated Vocals 1 and Vocals 2. Vocals 1 aims to deliver a classic rock sound from vocals that have a naturally wide dynamic range, while Vocals 2 is suited to more restrained performances with fewer level variations. In both cases the aim is to sit the vocals in the track without compromising clarity or presence using one‑knob compression, delay, reverb, and a treble control designed to add presence. There's a very obvious difference between the two options: the second setting has a subtle reverb that sits nicely behind the main vocal, while the first vocal style is very up‑front and solid, and so better suited to rock productions. 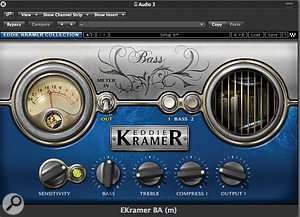 The Drum Channel plug‑in has individual modes for bass drums, snares, hi‑hats and toms, as well as room and overhead mics, and is designed to deliver the breadth of different drum sounds for which Eddie is well known. These processing elements can be combined in different ways, to provide the user with unique kit combinations. Compression and gating are available on some of the options, but are greyed out where their use would not be appropriate. The seemingly simple bass and treble EQ for each section is tailored to the drum type in question, and so is far more effective than you might imagine. This is a great 'fix it quick' plug‑in for drum sounds, though if you want artificial reverb rather than the room ambience, you'll have to add it yourself.

The Bass Channel plug‑in again comes with two sound variations: Bass 1 retains more of the original dynamic range, while Bass 2 uses more compression to create bigger, heavier bass sounds that have both weight and presence, while also accentuating those essential lower‑mid frequencies that allow the bass to be audible in a radio mix. As with the drum plug‑in, the EQ has been simplified to bass and treble controls, and compression is controlled using a single knob. The process certainly helps even up the bass, while allowing it to sit correctly in a mix without getting buried, especially the second setting, where more compression can be used to really beef up the end result. 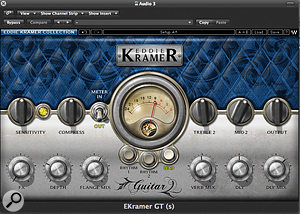 The Guitar Channel plug‑in has three types of setting, one for lead guitars and two for rhythm guitars. These effects are designed to be added to an existing miked guitar sound or a recording made via a suitable preamp — there's no amp or speaker modelling here. As far back as the Jimi Hendrix recordings, Eddie Kramer often combined delay, EQ, compression and modulation to create a big, exciting sound, and all those elements are available here; the modulation is based on a studio flanger. The rhythm-guitar treatments aim to keep the sound present in the mix but without making them sound over‑treated. The processing elements comprise compression, reverb, treble and mid-range EQ and flanging. Careful use of this plug‑in helps guitars sit comfortably in a mix without getting lost, and the effects can be quite subtle. There's not much here you couldn't create yourself from separate plug‑ins but there's no denying the convenience of this format.

Eddie Kramer has developed a number of delay‑based effect treatments that he often brings into play when mixing both vocals and guitars. There are two types of delay on offer here: one emulates 15ips tape ADT or slap‑back echo with some EMT plate reverb added, while the second is a longer delay typical of a 7.5ips tape speed with a bit of feedback and a longer plate reverb setting. EQ has been condensed to a single Brightness control, while the reverb has only controls for size and mix. These work nicely under guitar or vocal parts, but again don't really explore any areas you couldn't reach with separate delay and reverb plug‑ins.

The Easy Way Out 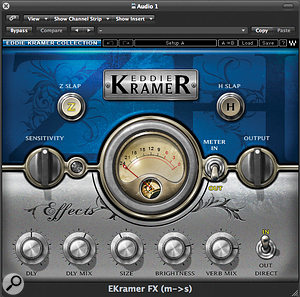 The strong points of this bundle are essentially the same as for the Tony Maserati collection and, presumably, any future 'signature' packages: there are relatively few controls to adjust to arrive at the sound you need, and the results sound musically 'right', which makes the plug‑ins more friendly to musicians who don't want to embark on an in‑depth engineering course. Any unnecessary controls are greyed out in modes where they are not needed, so there are never more controls available than are actually necessary. You also get a plug‑in dedicated to a particular purpose, so if you need to polish up a bass guitar track, you know exactly where to go and all the controls are to hand once the plug‑in is loaded.

There's no disputing that there are some great results to be had from this collection of plug‑ins, then, athough my feeling is that most competent engineers would be able to arrive at a similar end result themselves, as many of the effects are constructed from basic delay and reverb, with compression and EQ used for tonal shaping. This is no reflection on Eddie Kramer's approach, as combining the aforementioned processes in an artistically appropriate way is a large part of the engineering job: it's just that to me, at any rate, the plug‑ins hold relatively little mystery, unlike the Tony Maserati collection, which seemed more radical in many ways.

All the processes and effects used here are commonly available in other plug‑ins, but if you want Eddie Kramer's approach to how they should be combined and used, this is the only game in town.

The Waves 'signature series' plug‑ins are well thought‑out and extremely musician‑friendly. In my opinion, the cost of this particular collection is best justified by those musicians with limited engineering skills, though, as more experienced engineers could probably get similar results using their existing plug‑ins.