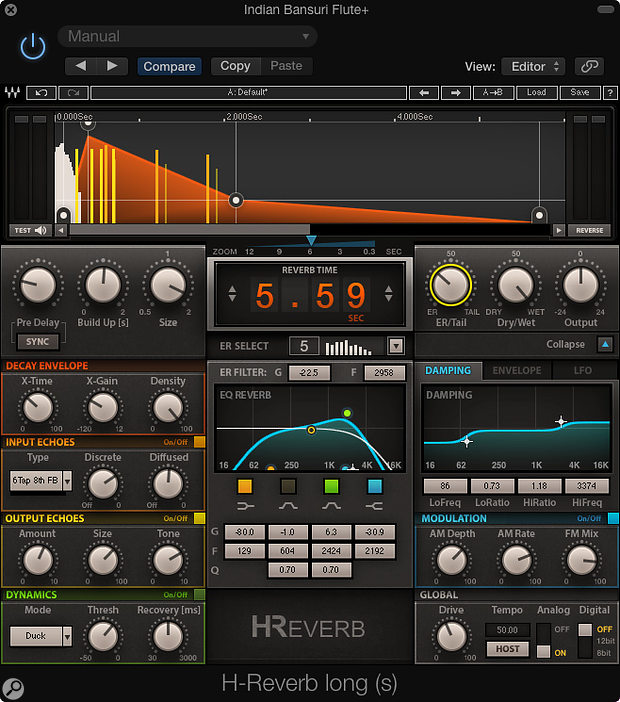 As regular readers will know, today’s digital reverberators invariably use either algorithmic synthesis or convolution to achieve their results. Synthetic digital reverbs came first and employed a mixture of FIR (Finite Impulse Response) filters, used to create the early reflections part of the reverb, and recirculating delays employing comb and all-pass filters to generate the complex reverb tail. Synthetic reverbs have the advantage of great flexibility and they can go beyond the realms of the natural, though they tend to offer a basic linear decay shape unless envelope-shaping trickery is applied. Perhaps more importantly, they have been used on many of the recordings that form our memories of how pop music should sound. Why else would there be such an interest in recreating the ‘imperfect’ sound of early digital reverb units, when the latest models by companies such as Bricasti and Lexicon sound so much more natural?

Convolution, on the other hand, relies on impulse responses (IRs): recordings which ‘sample’ the properties of a real space or a piece of studio hardware. These impulse responses are then ‘convolved’ with each sample of the sound being processed to recreate the acoustic character of the original environment. The benefit is that the recreations are extremely realistic, but there are downsides too. Using convolution, the CPU overhead increases with the reverb time. Furthermore, conventional convolution can’t capture time-variant characteristics such as chorus or pitch modulation, which are often used within synthetic reverberators to add complexity to the sound and to avoid metallic ringing. You could think of convolution as being akin to a photographic portrait, insomuch as there’s only so much you can do to change it using software before it starts to look unnatural.

Waves have combined both these approaches in creating their somewhat sophisticated H-Reverb, but it goes much further than that. Most professional engineers use reverb in combination with other processing. EQ is perhaps an obvious inclusion, though Waves have extended it here to add the less obvious option of resonant filtering that can be controlled by an envelope or LFO. Other processes often employed in conjunction with reverb include compression, de-essing (to cut down sibilant splashiness), ducking (to bring up the reverb level during pauses), modulation with variable rate and depth, delay that can be applied both pre- and post-reverb, and even degrees of overdrive distortion.

H-Reverb includes all of these and more in a single plug-in. Well, I say a single plug-in, but to optimise CPU resources, standard and ‘Long’ versions are installed. The basic version (or, as Waves call it, Component) of H-Reverb can generate up to six seconds of convolution-based reverb; if you want more, you’ll need the Long version, which can supply up to 12 seconds at the cost of a CPU overhead around 30 percent higher. In the vast majority of applications the ‘low fat’ mode is more than adequate. The synthetic part of the engine uses a fairly consistent amount of of processing power regardless of the decay time.

There are also Components that offer different channel counts. These include the expected mono, mono-to-stereo and stereo versions, while for the surround user, there are mono or stereo input options that output 5.0 or 5.1 formats, in addition to 5.0- and 5.1-input/output insert formats for use in surround busses. All the expected Mac and Windows plug-in protocols are supported, and H-Reverb features Waves’ standard load, save and compare functions in the plug-in header. Other niceties include a GUI that can hide the more complex controls when they are not needed.

H-Reverb also includes tools to allow the user to shape the build-up and decay of the reverb envelope. This can be useful in creating unnatural decays such as gated and reverse envelopes, but it can also be used to replicate the more complex decay shape resulting from coupled spaces that each have different decay times, such as the different areas of a cathedral. The X Time and X Gain controls can be used to create a point where the slope changes, which can be positioned anywhere between the initial decay and final release phase of the reverb tail. The build-up time also goes way beyond what you might expect to hear in nature — around two seconds at its fullest extent — enabling some very textural and erie treatments to be set up. The delay and pre-delay elements can be tempo-sync’ed, and multi-tap echoes can be applied to the reverb input and output.

Analogue modelling, as developed for Waves’ NLS plug-in, is used for the drive feature, which emulates overdriving the input stage of a hardware reverb unit. And as we’ve come to expect from Waves, H-Reverb includes an eclectic library of artist presets contributed by audio professionals as well as presets ‘inspired by’ classic hardware reverbs. These include the expected halls, rooms, plates, gated and reverse reverb treatments plus a few more outlandish offerings.

The manual suggests that the best way to get to know H-Reverb is to check out some of the presets, then experiment with the various controls to see how they affect the end result. This proved to be a very sensible first step, and I have to say that the factory presets are very wide-ranging, with emulations hinting at specific vintage hardware devices sitting alongside a huge range of custom treatments. While there are a few monstrous spaces included just to show off what the H-Reverb can do, the majority of the presets are musically sensible and integrate beautifully with the dry portion of the sound, just as you’d expect from a high-end reverb. While the H-Reverb includes both convolution and synthetic components, its GUI is more like that of a synthetic reverb, so you don’t really have to think about how the two elements are working together. A Test button injects an impulse of noise into the reverberator, which gives a good idea of how it will react to transient sounds such as drums.

From the basic window you can get to the key parameters of reverb time, pre-delay, build-up time, space size, ER/tail balance, wet/dry balance and overall output level. Reverb Size controls the spacing of the early reflections as well as the slope of the reverb build-up. You can also select from one of 10 ER (early reflection) patterns, as well as being able to adjust the reverb envelope by dragging points in the graphical upper section of the window, which displays the various reverb and delay elements and is zoomable. There’s even a button to reverse the reverb envelope. You can also switch on tempo sync for the pre-delay and either activate or deactivate the Input Echoes, Output Echoes, Dynamic and Modulation sections. 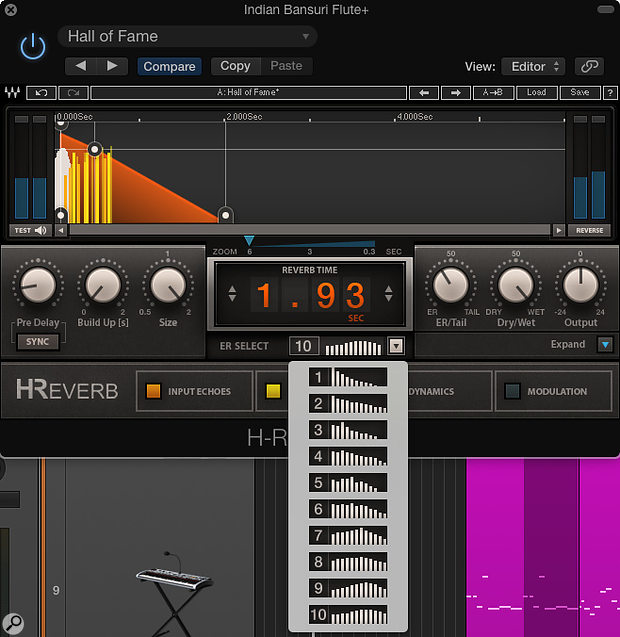 Among the many sound-shaping options in H-Reverb is the ability to choose from 10 different patterns of early reflections.

Clicking Expand doubles the window size, with the lower half providing access to the various processing sections — though each section offers only a modest number of controls, so there’s nothing intimidating. The centre of the window is occupied by a four-band EQ section, which features two fully parametric mids, flanked by high and low shelving filters, and has both drag-to-adjust and direct parameter box access to its four bands. There’s no dedicated low-cut filter, though the shelving filters can provide up to 80dB of attenuation if required, which achieves much the same result. Separate high-cut filtering for the early reflections is available directly above the main EQ graphic display.

A Density control resides in the Decay Envelopes section and adjusts the coarseness of the reverb tail from dense and natural to coarse and grainy. This can be used in conjunction with the Global Drive and either Analogue emulation or Digital word-length reduction (to 12-bit or eight-bit) to recreate the sound of vintage hardware.

A separate two-band damping section modifies the reverberant signal (adjusting the relative high- and low-frequency decay) with two sets of frequency and ratio controls, though again, dragging the two points in the window provides the most direct method of adjustment. Tabs above this window enable it to switch views to the Envelope and LFO settings for creating filter-sweep effects. These include settings for the resonant filter, including a choice of resonant low-pass or high-pass. The LFO can be tempo-sync’ed and the waveform inverted if required. A drop-down menu in the dynamics section is used to switch between ducking, de-essing or compression. There are controls for threshold and recovery, but there doesn’t seem to be any visual indication of when the signal exceeds the threshold, which I felt might have been useful.

Seven choices of Input Delay can be mixed in using the Discrete and Diffuse level controls, while the four-tap Output Echoes can be adjusted in level, ‘size’ and tonality. In the modulation section, the AM controls apply amplitude modulation to the reverb input, with adjustable rate and depth, while the FM mix control allows the degree of pitch modulation to be adjusted separately. Used subtly it can add a rich chorus or mild flanging effect to the proceedings. This is relatively subtle compared with the resonant filter, which produces a much more obvious effect and can work magic on bland percussion loops. H-Reverb’s Surround components include additional controls providing adjustment of the balance and shelving EQ of the rear channel elements. You can also opt to apply reverb to the centre channel or leave it dry.

What all this adds up to is a complete toolkit for reverb treatment. The delays could be used on their own to create vintage tape-style echoes, while the reverb itself does a great job of emulating both classic hardware and more modern reverb devices. Many current vocal treatments combine reverb and delay, all of which are covered within this plug-in, while tasks such as compression, ducking, de-essing and sweep filtering that are usually handled via separate plug-ins are always on call if you need them.

Most importantly, the reverb itself sounds musical, adding scale and dimension to sounds without pushing them into the background or making them sound muddy. It’s probably fair to say that if you need an accurate recreation of specific acoustic environments, then a conventional convolution reverb with a large library of IRs may be more appropriate, but for pop and rock music production I think Waves have pretty much got it nailed with H-Reverb. And yes, it does hog a little CPU overhead, with the standard stereo version using around 20 percent of my Macbook Pro’s CPU capacity at 44.1kHz, according to the meters in Logic Pro, but the result is worth it — and anyway, how often are you going to need more than one or two of these in a mix?

I don’t know of any other reverb plug-in that offers so much additional processing, so the alternative would have to be the quality reverb of your choice plus a handful of delay, dynamic and filtering plug-ins.

Waves have clearly looked at how reverb is used in music production and then added all the tools to give us what we need in a single plug-in. Despite its sophistication it remains very easy to use.