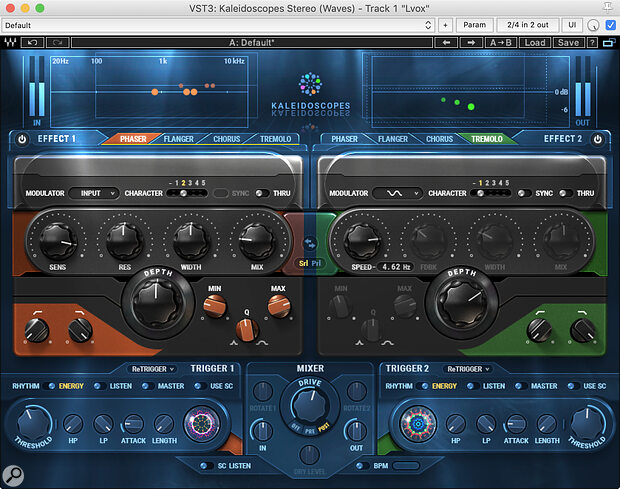 Waves breathe a little freshness into the familiar.

A plug‑in that offers two identical modulation effects slots, each of which can host Phasing, Flanging, Chorus or Tremolo effects, might not sound all that exciting, but Waves Kaleidoscopes (which supports all the common Mac OS and Windows formats) makes it possible to squeeze a lot of extra mileage out of these effects. That said, there’s nothing complicated or intimidating: there are just a few more controls than you’d find on a typical modulation stompbox, and in modes where not all the controls are relevant, the unused ones are greyed out.

Two slots can each host one effect, chosen using the tabs above, and a choice of routing allows one effect to be fed into the other or for the two to run in parallel. The modulation can be driven by an LFO, a random generator, the input signal itself or a side‑chain input. The LFO waveform options are Sine, Triangle or Absolute Sine; the last appears to be a full‑wave rectified version of a sine wave. There’s also the option of sync’ing the modulations to the DAW tempo. Dots move on the two upper displays to indicate the speed and range of the modulator applied to each effect.

I love that these familiar effects can be combined and controlled to create something that sounds fresh.

Each slot also includes a trigger section, which can make the modulation respond to the plug‑in’s main or side‑chain input source; a Side Chain Listen mode helps in the latter case. A tiny animated kaleidoscope indicates when the trigger section is operating. Controls in this section are Threshold, Sensitivity, high‑ and low‑pass filtering, Attack and Length, which defines how long the trigger remains open (in milliseconds or tempo divisions). A further option uses transients rather than signal level as the trigger.

There are three different trigger modes. In Simple mode, once the trigger signal exceeds the threshold, modulation movement begins and continues until stopped manually. Re‑Trigger mode starts the same way but ceases when the signal falls below the threshold. In One Shot mode (unavailable with Random, Input and SC modulators), it completes the attack and length cycle set by the user controls, then stops. When one trigger section is set to Master, control is handed over from one trigger section to the other at the end of a cycle.

The usual depth and rate controls are joined by a five‑position character control that uses filters to create different tonalities, and a set of high‑ and low‑cut filters. Stereo, mono and mono‑to‑stereo instances are supported, and a Master section includes a Drive control that can act pre‑ or post‑ the effects. A Dry Level control blends in the dry signal, and two Rotate knobs can position the effects left or right when configured in parallel. The resonance control, where present, ‘peaks up’ the filtering effect, making the effect sound more obvious.

The mainstream effects, such as deep flanging, guitar amp tremolo or phaser pedal emulation, sound great and are easy to achieve, but what I love about Kaleidoscopes is that these familiar effects can be combined and controlled to create something that sounds fresh. The various modulation waveforms and even more so the trigger options open up new possibilities for effects that come and go rhythmically, or behave in a less obviously cyclic manner. The trigger modes can also do fun things to percussion, or to other sounds if triggered by a percussion track.

Kaleidoscopes takes four old friends and turns them into something new and very versatile.