No matter how many compressors we own, when it comes to getting vocal levels right, there's no substitute for faders and hard work. Until now... 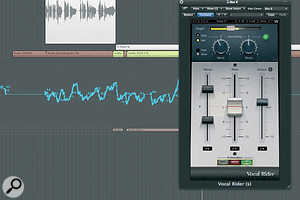 Vocal Rider in action, showing the resulting automation exported to a Logic track.

How do you get a vocal to sit at the right level in a mix? You listen to the vocal level in the context of any instrumental backing, and make fader moves to keep the vocal balanced against the rest of the mix. This takes time, but invariably sounds better than bludgeoning your vocal to death with excessive compression. Now Waves have come up with a plug‑in that does the job for you in a very straightforward and elegant manner. Vocal Rider is a cross‑platform plug‑in available in TDM, VST, AU and RTAS formats, and works by writing automation data for its own level fader directly into your DAW. The standard Waves window bar is provided for saving and loading presets and for comparing between 'A' and 'B' settings. The plug‑in comes as mono and stereo versions and is protected by iLok; you can also download a demo to try before you buy.

Up to 24‑bit, 96kHz operation is supported, and the plug‑in works in real time so you don't even have to 'learn' the track first. The plug‑in has a side‑chain input, and the best way to follow the mix level is to route all the instrumental sources in the mix to a bus and then select that as the side‑chain source. Once you've levelled the vocal using Vocal Rider, you can apply compression more gently and more musically, using the plug‑in of your choice, as you no longer have to deal with large level variations.

It is necessary for the program to be able to differentiate vocals from background noise, which is where the Vocal Sensitivity knob comes in. This is, in essence, a threshold that tells Vocal Rider to ignore sounds below a certain level; a Ride/Idle activity LED lights when an above‑threshold vocal has been detected. Target sets the reference level range for your vocal using a transparent fader cap, which moves over a horizontal bar meter showing the vocal level. The time constants governing the speed of the fader are preset, but there is a fast Attack setting (which affects both the side‑chain and fader response rates) you can choose if you prefer the results it produces. Vocal Rider also includes Waves' own breath‑detection algorithm, so that the plug‑in doesn't turn up all the breath sounds.

The trick to getting the vocal to sit naturally in the mix is to adjust the Target and Music sensitivity controls after first setting the Vocal Sensitivity control so that only vocals are recognised and spill is ignored. Music Sensitivity determines the amount by which Vocal Rider reacts to the backing mix level, so if, for example, the song gets louder in the chorus, the vocal will also be lifted so that it doesn't get buried. A sensitivity LED monitors the response to the side‑chain input. Another important control is the double‑headed Range Min/Max slider, which limits the amount by which the vocal can be turned up or down.

At the centre of the window is the Rider fader, which moves according to the input levels and the settings you've made, and it is this that is automated via your DAW's automation system, according to the Automation Read, Write or Off mode buttons below. The Idle Arrow sets the value the Rider Fader will settle at when no vocal is detected. The DAW's own automation must be armed separately when recording the fader movement, but otherwise, data is recorded in the the same way as for automating any other plug‑in. Last in the signal path is the Output gain trim fader and associated clip LED. 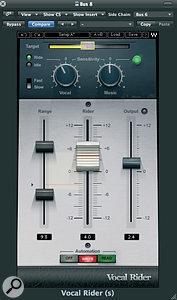 The further you move the Target fader to the left, the more heavy‑handed Vocal Rider becomes.

Operation turned out to be very straightforward using Logic Pro 9 running on a Mac Pro. Vocal Rider is inserted on your vocal or vocal group track and the side‑chain input set to the bus to which the rest of your mix is routed. As the track plays, you adjust the Vocal Sensitivity, Attack and Instrument Sensitivity controls to get a subjectively even vocal level in all parts of the song, then adjust Target using its transparent fader cap. The yellow bar in the fader track shows the actual vocal level, and the further to the left you take the fader, the more severely the vocal level is controlled, as the target level is then lower. You can then use the output trim to adjust the overall vocal level to your liking. The Rider fader will move as the plug‑in does its stuff, even before you record its output as automation data, and you can fine‑tune the operation by setting the range faders to limit the amount of level cut or boost applied. When you're happy that all is sounding OK, you can record the fader movement as automation in your DAW, which means that if you disagree with what Vocal Rider is doing at any time, you can go in and edit the automation data.

Waves go to great lengths to explain that Vocal Rider is not a compressor and so does not introduce coloration. I can appreciate what they mean, as all gain changes are done using a fader rather than a VCA, FET or valve, though the end result is an automatic reduction in vocal dynamic range — which some would still define as a form of compression. The benefits of doing it in this way, though, are very real, as you don't hear any of the side‑effects of a conventional compressor, and you can edit the results just as you might if you'd manually ridden the fader and recorded the movements.

The other plug‑in parameters can also be automated, but I found that if I adjusted any of these while the fader automation was being written, it disturbed Logic's automation‑writing process, so it would be safest to automate any additional controls during a separate pass if this also happens on the DAW you are using.

I found Vocal Rider fairly intuitive in use and the results sounded very natural, allowing me to be more discriminating in the use of any compression subsequently added. To achieve the same level of consistency through manually writing automation data would be extremely time‑consuming and probably still wouldn't achieve such precise results, so I don't think I'm going too far in suggesting that this could be one of the most significant new ideas in plug‑ins since automatic pitch correction. And, like most good ideas, it seems entirely obvious when viewed with the benefit of hindsight.

The obvious alternative is to do the fader moves yourself and record them as automation. However, Pro Tools users might also want to investigate Wave Rider from Quiet Art (http://waverider.quietart.co.nz). We'll be taking a look at this in SOS soon.

A practical solution to vocal levelling that doesn't rely on heavy‑handed compression.