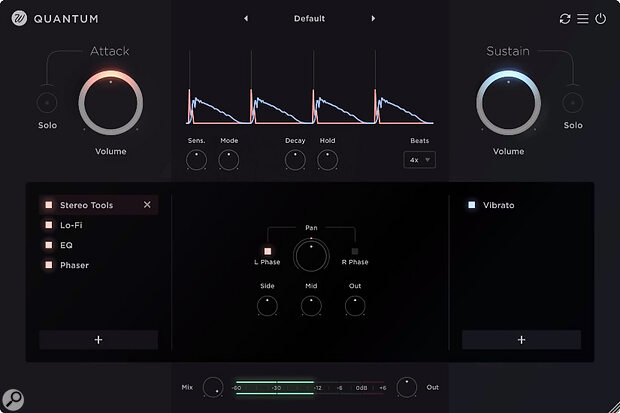 Quantum is similar in concept to Eventide’s Physion, in that it can split sounds into attack transients and sustain components and both change the level of and apply different effects to those elements separately. It has 16 effects to choose from: Chorus, Compressor, Stereo Delay (with tempo sync), Enhancer, five‑band Graphic EQ with seven filter types, Flanger, Lo‑Fi, Phaser, Pitch, Algorithmic Reverb, Saturation, M‑S Stereo Tools, Tremolo and Vibrato. There’s also an IR‑based effect, with the option to import IRs. The plug‑in supports VST, VST3, AU, and AAX (64‑bit only) for Mac and Windows hosts.

The transient detection is largely automatic, once the user has selected the source type (Drums, General or Soft), the difference between modes being the type of crossfade between the attack and sustain. A sensitivity control allows fine adjustment of the detection, and the transient length can be adjusted using the Decay knob.

Quantum’s resizable GUI is divided into sections, with two large knobs for adjusting the attack and sustain levels. A waveform display shows the transients in orange, the sustains in blue, and transient detection as vertical grey lines. Solo buttons can isolate the attack or sustain component, and below are knobs for Sensitivity, Decay, Curve and Hold. The Sensitivity knob can be adjusted to achieve the most reliable transient detection, Decay sets the time before the sustain part takes over, and Hold sets the minimum time between detected transients, to avoid unwanted triggering.

I took an electric Piano sound, pitch‑shifted its attack up an octave and added a gentle vibrato to the sustain. That... gave me a completely new instrument!

Quantum works fine as a conventional transient shaper, to sharpen or soften attacks, or adjust the sustain, but the fun really starts when you add the effects found in the lower half of the GUI. Each effect has an edit panel that can be displayed in the lower‑mid section of the window. For example, pitch‑shifting an electric piano sound’s attack up an octave and adding a gentle vibrato to the sustain took little effort but gave me a completely new instrument! If you need corrective rather than creative treatments, then you can EQ either part of the sound, or perhaps try adding an enhancer to ‘sharpen’ only the attacks. Excessive room ambience can be shortened by reducing the sustain level, while adding reverb only to the attack of a percussive sound can produce a cleaner result than applying it to the whole signal. With plenty of scope for creative treatments here, experimentation is often richly rewarded.

Quantum is easy to use and produces good results on most material, although on things like synth pads I found it could sometimes detect false transients when none were present, so you do need to pay close attention and adjust the Sensitivity and Hold controls for different material. With plucked or struck sounds, the results were far more predictable. There’s such a generous selection of effects here that there are plenty of creative opportunities to explore in addition to the more usual transient‑shaper tasks, so this is a plug‑in with plenty of potential.