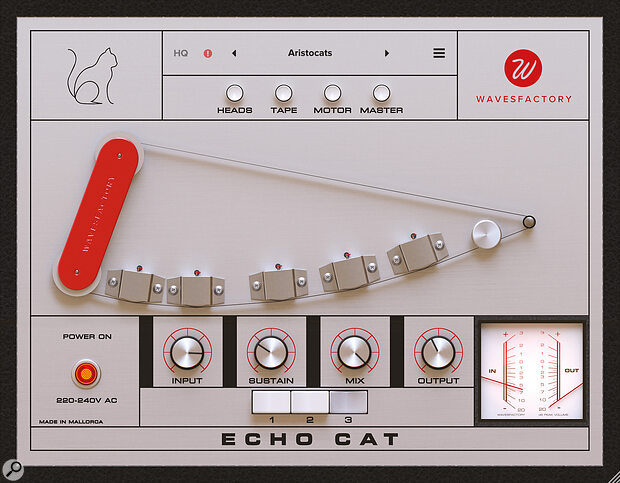 The Echo Cat mimics the famous Watkins hardware tape delay, but is capable of more besides.

The idea that the WEM Copicat would become a sought‑after vintage item would have seemed pretty strange to musicians of a previous generation. The ubiquitous silver boxes sold by the hundreds of thousands to guitarists who couldn’t afford a Binson or an Echoplex. They endured years of abuse on the pub circuit and eventually found their way into junk shops and online auctions, while those who’d gigged with them embraced digital delays with a sigh of relief. In other words, there are lots of Copicats out there, they were never state‑of‑the‑art devices at the best of times, and nearly all of them are now knackered. So, obviously, what we need is a plug‑in version — and that’s exactly what Wavesfactory have produced.

Echo Cat is available in all the usual native formats, and is claimed to be a faithful recreation of Charlie Watkins’ invention — if you want it to be. Echo Cat will also oblige if you prefer inauthentic mod cons such as tempo‑sync’ed delay times, ducking, modulation, stereo operation and so on. 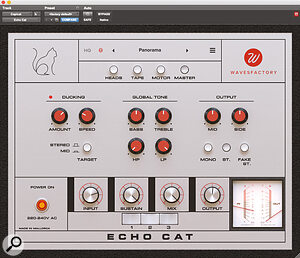 Useful features not available on the original hardware include a ducked delay mode.

Copicats have many lives, and WEM applied the name to many different echo units. A few of them weren’t even tape delays, while the most collectable models are probably the early valve‑based designs. However, Watkins himself preferred the sound of the later solid‑state Copicats, and these were certainly the most popular. Echo Cat’s freely resizeable GUI suggests that it was modelled after the Mk4, which dates from the early ’70s and is thought to be the best‑selling incarnation of all. It’s actually a really nice‑looking plug‑in, and a lot smarter than any Copicat I’ve seen in the flesh. Available in all the usual native formats for Mac and Windows, it’s authorised using a user name and serial number.

I sold my own silverface Copicat a long time ago after realising that I hadn’t switched it on for several years, so for the purposes of writing this review, I borrowed one from a local studio. “I hope it works,” they said. “We haven’t switched it on for several years.” It did, though it reminded me just how much mechanical noise a tape delay can make when it hasn’t been serviced for a while.

There were Copicat models that had varispeed, but the majority didn’t. As they were equipped with three playback heads, this meant a choice of three fixed and not‑always‑terribly‑useful delay times, which could be mixed and matched in any combination. The preamp stage of the Copicat was anything but transparent, and could easily be overdriven into obvious distortion. There were no filters or tone controls in either the delay path or the dry path, but the regeneration (Sustain) control could be cranked up to produce a satisfyingly chewy out‑of‑control feedback. And, well, that was it. 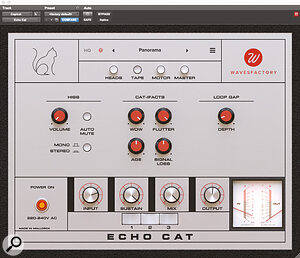 There’s control over what were once undesirable artefacts, such as wow, flutter and hiss.Echo Cat’s signal path differs from that of the original in one important way. As Wavesfactory themselves acknowledge, Copicats weren’t really studio tools; they sold mainly to guitarists. In the days before amps routinely had effects loops, you’d plug your instrument directly into the Copicat, set the wet/dry mix using the curiously named Swell dial, and then feed its output into your Simms‑Watts combo and get some flares flapping on the dance floor. If you use Echo Cat this way, though, it won’t sound the same. That’s because its dry signal is tapped before the preamp stage, and is thus completely clean in a way that no dry signal passing through a real Copicat ever was.

When you crank up the Sustain control, the runaway feedback has exactly the right tone and feel to it.

Used 100‑percent wet, though, it can get pretty damn close to the real thing. Unless you’re lucky enough to have a Copicat in mint condition, matching the sound of a real one will require some tinkering with the controls in the ‘Cat‑ifacts’ panel, and adding generous doses of hiss and hum. But Echo Cat’s emulated hiss has the same rather muted and pink noise‑esque character as the real thing, and the tape Age and Signal Loss dials make it easy to add the right amount of degradation. And when you crank up the Sustain control, the runaway feedback has exactly the right tone and feel to it. 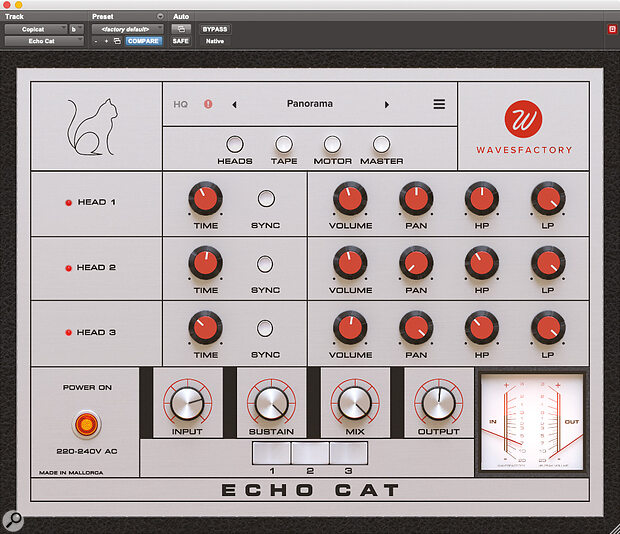 The four buttons at the top of the GUI take you into secondary screens. Here you can see the Heads view, which gives you control over the level, pan and feedback for each head, amongst other things.

There are plenty more detailed options for fine‑tuning Echo Cat to match a vintage original, including the ability to vary the length of the virtual tape splice, but don’t get the impression that this is a plug‑in designed only to appeal to Copicat obsessives. It very much isn’t limited to producing hissy, lo‑fi mono echoes at fixed delay times, and in practice, I quickly found myself treating it as a really nice‑sounding, versatile tape delay emulation that just happens to have a nice picture of a cat on it.

Echo Cat’s three playback heads can be individually panned, adjusted in level and filtered, and each has a freely variable delay time that can be sync’ed to host tempo. There are also global tone and filter controls, stereo and ‘fake stereo’ output options, and the aforementioned ducking feature. This can be set to duck either the full signal or only the Mid component, which is a nice touch, allowing a vocal to be heard clearly in the centre of the mix with delays swirling in to fill the gap at the end of each phrase. 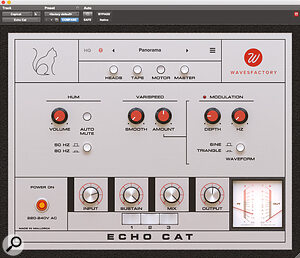 There’s varispeed and modulation...Echo Cat also includes a neat Varispeed emulation: the point of this is not to allow the delay time to be changed, but to offer a very characteristic LFO‑controlled modulation effect. This absolutely nails the sound of a struggling tape transport, without the nagging worry that it’s about to fail completely and land you with a hefty maintenance bill.

Echo Cat is thus much more than a Copicat emulation. It’s a tape delay plug‑in that uses the Copicat as a starting point from which to build, and does so in ways that sound great and massively extend its usefulness. Whereas a real Copicat Mk4 is fun but of limited use in a studio context, Echo Cat is the sort of plug‑in you’ll use on every mix you do. This is one plug‑in that isn’t just as good as the real thing, but way, way better.

A very nice‑sounding tape delay plug‑in that is capable of emulating the classic WEM Copicat, but not limited to doing that!