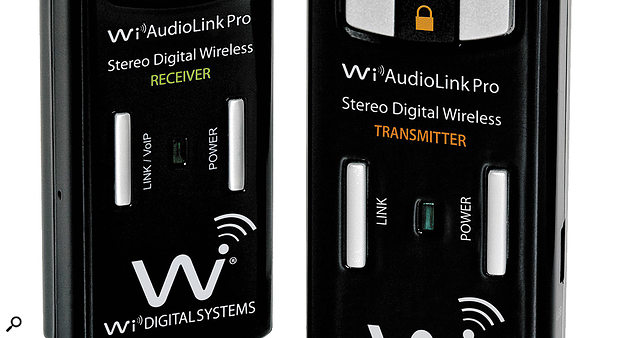 This affordable wireless system offers some unusual features, including stereo operation and tablet and computer interfacing.

Digital wireless mics and instrument packs are nothing new but the Wi AudioLink Pro has the distinction of being both very compact and having stereo capability — as well as a couple of other neat tricks. It operates in the licence-free 2.4GHz digital wireless band, and the audio coding is uncompressed PCM at 16-bit, 48kHz. It has an audio range of 15Hz to 20kHz and a signal-to-noise ratio in excess of 90dB for full modulation, with a typical range up to 30 metres depending on conditions.

Based on dual internal antennas and powered from USB-chargeable internal batteries, the transmitter/receiver units themselves measure just 30 x 15 x 82 mm and weigh just over 28g each. The manufacturers suggest that this wireless system can be used by guitarists, bassists, keyboard players, drummers and, also, because the hardware is so small, for personal audio monitoring such as driving in-ear ‘phones. A number of adaptor cables and adaptors come with the kit, all packed in a neat zip-up pouch, to allow you to exploit its many features.

The real trick-up-the-sleeve of this system is that it supports four operational modes, including simultaneous two-way communication with a computer or tablet. This means that you can, for example, wear the receiver and connect it to your tablet to send audio to it wirelessly, while simultaneously monitoring the audio from it through the headphone jack, via an included dual adaptor, which fits into the receiver audio jack to provide a guitar-in/headphone-out connection.

There’s compatibility for all recent Windows versions (XP, Vista, 7 and 8), as well as Windows Surface tablets, Mac OS X and iPad, with remote control facilities on the receiver for Pause, Mute, Next/Prev Track and Mic On/Off. 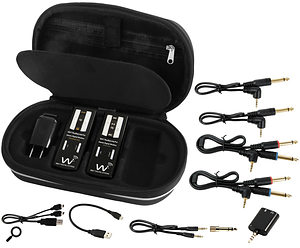 The system comes in a handy pouch and includes all the adaptor cables you need to get the most from it.The four different operational modes are called Mono Preamp-In, Mono Line-In, Stereo Line-In and Two-Way (which works as described earlier). Modes are changed via a power-up sequence involving holding down buttons; passive guitar pickups and line-level signals have their own additional boot-up settings, and the transmitter is recognised as an audio interface if powered up after being connected to the host computer or tablet.

At first glance the transmitter and receiver look identical — only differences in the legending give the game away. Each has a belt clip on the back and a mini-jack socket on the top edge. The transmitter jack is for audio in while the receiver jack is for audio in and out, via the aforementioned adaptor, which has mic and phone icons marking its sockets. (In this instance I think ‘mic’ really means instrument.) Mini-USB-charging points are fitted to the right-hand edge of each unit, and a charger is included with a split output cable enabling both units to be charged at the same time. In normal use you can expect at least four hours of operation per charge. USB 5V bus power may also be used to power the units. A tiny hole in the left-hand edge is used to perform a reset using a paper clip or similar.

Buttons on the top face of the units allow for volume up or down control, as well as muting. The receiver also has the previously mentioned remote control buttons, and both have a power switch and a Link switch (the units are shipped ready linked to each other), which also doubles as a mic input on/off switch.

While the transmitter button layout is exactly the same, the transport functions of the receiver have been replaced by Mode, Lock and Mute buttons, and there’s no mic-switching mode.

As a straightforward wireless system, the Wi AudioLink Pro is simple to operate and produces clean audio with no perceived added delay. Reconfiguring the system to send the guitar to an amp sim on my laptop (transmitter at the computer end, receiver at my end) and then back to ‘phones connected to my belt pack also proved straightforward, again with quite adequate sound quality. I’d have felt more confident with 24-bit converters, but it’s possible that the use of bi-directional communication and the stereo capability precludes that.

Given the very low price of this system and its compact size, it provides a very convenient way to drive in-ear monitors without blowing the budget, and it also works fine as a standard wireless system for guitar or keyboard, with the added bonus that it can handle stereo signals. There’s also the option of using it to hook up to your iPad for use with guitar-amp effects apps, so if you need something cheap, cheerful, flexible and decent sounding, then give the Wi AudioLink Pro a shot.

We’ve reviewed many wireless systems before, from the likes of Line 6, LD Systems, Samson and so on, but none of those offer bi-directional audio interfacing.

A highly affordable wireless system that works for guitars, IEMs, and even with tablets and computers.