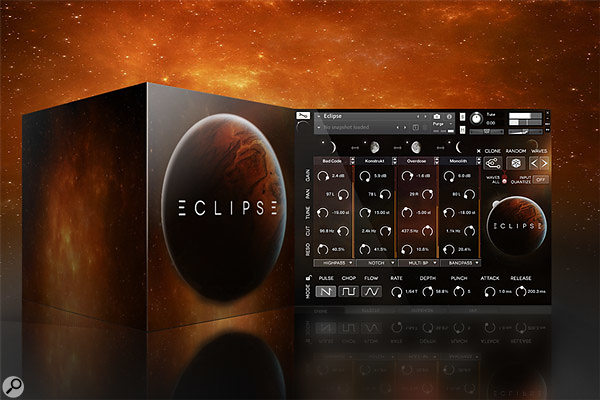 Eclipse is a Kontakt instrument with a lot of similarities to Orbit, Wide Blue Sound’s previous opus. The installation process is an improvement on the early version I reviewed and now it resides snugly in Kontakt’s Libraries menu. It’s a little smaller too, taking less than 600MB of disk space.

Intended as a source of atmospherics in motion, each Eclipse patch is built from four well-crafted stereo samples that loop continuously; these are known as Orbits. The synthesis engine also includes filtering and transposition of each sample, and since the samples are rich and complex across the whole audio spectrum, filtering is a vital tool for homing in on sections of the samples ready to recombine with others. It means that, even though you’re given just 69 audio sources to play with, they can be blended to form a large number of genuinely different permutations. The factory presets (stored as snapshots) provide excellent examples.

The source waves are organised into three categories: Simple, Complex and Asylum. While there are some style overlaps, the Simple waves are primarily drones or Wavestation-like shifting textures. They include many brooding, reverberant pads, sometimes with an added resonant whistle or bloated sawtooth bed. The Complex category is notable for its increased movement, dynamics and processing. Here you’ll find disturbing wails and reverse effects, plus the sounds of desolation, sensory deprivation (think ‘Altered States’) and post-apocalyptic gloom. Finally, Asylum hits the extremes like a blood-splattered horror novel. This is the most diverse category and it includes computer-like bleeps, deranged guitar loops, mechanical effects and tormented choirs.

You can randomly scramble the available sources by clicking on the dice icon, but the real fun starts when you apply one of the three LFO shapes that govern the transitions from one orbit to the next. The shapes available are: pulse (a sawtooth wave), chop (a square wave) and flow (sine). Naturally you can set the rate of transition and the depth of the effect, and there are basic envelope controls too. It’s synthesis made simple, but I don’t mean that as a criticism. It’s surprising how many textures are ready to be discovered, and that’s even before you turn to the four-part step sequencer and impressive effects engine, complete with convolution reverb. For extra performance kicks, Kontakt keys are provided to switch the sequencer on and off, mute individual Orbits and so on.

Eclipse is a high quality bundle of ready-made textures for the film or TV composer. While the previous collection delivered cinematic ambience, Eclipse is notably darker thanks to its choice of source material. Yet there’s enough direct tweakability to serve up surprise twists long after you’ve become familiar with every source sample. It’s also cheaper than its predecessor (Orbit owners are entitled to a discount) and both are compatible with the forthcoming Lemur profile for iOS, known as Skypad.