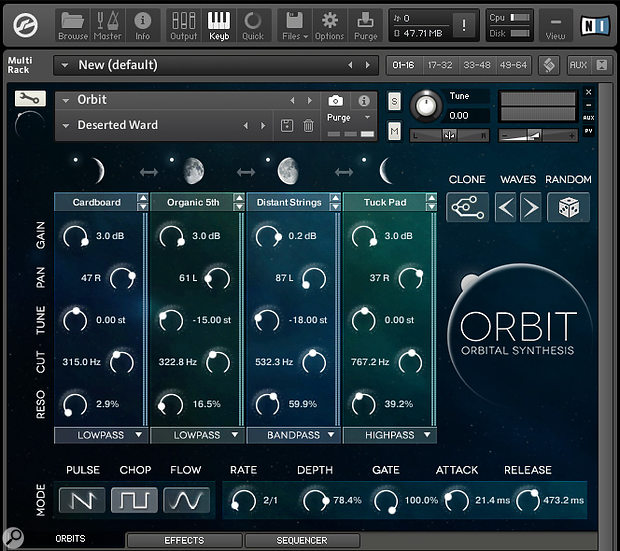 Orbit is a Kontakt 5 instrument designed to be a source of evolving or pulsing textures. Unusually, you access it via Kontakt’s ‘files’ rather than ‘libraries’ menu. Other than that inconvenience (and the manual process for installing its presets), it’s plain sailing throughout — and a speedy download too since it needs only around 800MB of disk space.

Orbit consists of three pages, the first offering up to four simultaneous samples known as Orbits. Each of these has a level control, transposition, panning and a choice of low-pass, high-pass or band-pass filters. The filters are fairly unsophisticated in tone but can play important roles in differentiating each Orbit. There’s a global attack/release envelope, but no way to restrict polyphony — so be careful of those long releases if you don’t like wallowing in mush.

Around 100 looping samples, many up to a minute long, are the ideal starting points for shifting, cinematic pads. Thanks to an interface with very few controls (none of them complicated) you might be pleasantly surprised at how quickly Orbit justifies its presence. The samples are divided by mood into dark, dreamy, mysterious and aggressive and include Mellotrons, vocal pads, sinister rumbles, organs, synth waveforms and long, complex washes. Almost without exception they fit well together without the need of extra processing, although a few more choices wouldn’t have gone amiss. If you prefer to start creating original patches rather than audition presets, clicking the dice icon randomly picks new samples for each Orbit.

Other than its sample stock, Orbit’s claim to fame lies in its three ‘rhythmic engines’, named Pulse, Chop and Flow. Each Orbit plays for a given duration before transitioning to the next, with the shape of the transition determined by the mode. The transition speed is variable between eight bars and 64th-note triplets, while the other key component is the depth control, which specifies the amount of overlap. At the minimum depth the four Orbits are heard together, and at the maximum only one is audible at once. The effect is broadly comparable to the vector effects achievable on the Korg Wavestation or Sequential Prophet VS, but with the extra nuance of long samples. When you choose Pulse (a sawtooth wave, confusingly enough), a ‘punch’ option appears, which had the effect of making the pulses more staccato in nature. For Chop (a square wave), there’s a gate width control. Flow is based on a sinewave and therefore applies the smoothest transitions.

If this were all ‘Orbital Synthesis’ had to offer, you might feel somewhat underwhelmed, but fortunately two extra pages introduce effects and a step sequencer respectively. Up to six simultaneous effects can be used, starting with screaming distortion and encompassing a choice of chorus, phaser or flanger, convolution reverb, delay and a low-pass filter. As I experienced some crackling issues using some of the reverb algorithms, I mostly opted for Logic’s internal, less greedy reverbs instead, but the rest of the effects were too good to pass up, especially when you notice that the step sequencer can modulate some of their parameters.

The final tab opens a sequencer consisting of four rows that run at independent speeds and directions. The sequences apply relative changes to up to four parameters of the sound or effect engine; by setting independent lengths for each row (up to 64 steps) your patches are given extra life and welcome unpredictability. It’s a shame there’s a fairly conservative set of parameters up for control, though. You’re able to sequence the global pitch and the cutoff frequency of the effects section filter, but not the pitch or filter parameters of individual Orbits. And while you can modulate the delay’s depth and feedback, you can’t sequence its speed values. The most impressive results are achieved by sequencing the Orbit mode parameters. For example, fast-switching between Pulse and Flow while slowly adjusting the modulation depth is a recipe for some wonderful pads and atmospheres; you still have a couple of rows left to vary effect levels or global filter settings.

At its $200 download price, Orbit is neither cheap nor revolutionary, but its evolving timbres are a worthy source of pads and tension beds even before movement is introduced. The simplified interface mostly works in its favour and, even though I would have welcomed more raw material, I found myself drawn back into Orbit again and again for its many evocative moods and layers.