When Universal Audio introduced their Apollo line of combined audio interfaces and DSP accelerators back in 2012, the default mode of connection was by Firewire, with Thunderbolt support available through an optional add–on card. However, last year saw the launch of the Thunderbolt–only Apollo Twin desktop interface, and more recently came the announcement that Apple are dropping native Mac OS Firewire driver support in El Capitan and future operating systems. No surprise, then, that although the ‘classic’ Firewire version of the Apollo is still available, a rejig of UA’s product line has now brought us a new Thunderbolt–only rackmounting model.

As you’d expect, the Apollo 8p has much in common with its siblings, so I won’t dwell here on the qualities that it shares with products we’ve already reviewed. Suffice it to say that the audio quality is impeccable, hardware metering is clear and detailed, and that UA’s DSP platform is proven, reliable and works well. Like its predecessors, the Apollo 8p offers plenty of processing horsepower, with four SHARC DSP chips under the bonnet, and a pretty comprehensive array of analogue and digital I/O. Of particular note is the fullest implementation yet of Universal Audio’s Unison preamp modelling technology. Previous Apollos have provided a maximum of four Unison–capable preamps, but as its name suggests, the 8p doubles this total, potentially making the technology much more useful. On previous Apollos, most multitrack sessions would require you to combine Unison preamps on some mics with outboard preamps on the others. With eight of the former to hand, you can now track an entire drum kit or a small live band entirely using Unison emulations.

All eight analogue input channels can also accept line–level signals, and one very welcome feature is that these can either be routed through the Unison preamps for warmth and colour, or set to bypass them entirely for the cleanest possible signal. The first two input channels also have auto–sensing, high–impedance sockets on the front panel for direct connection of electric guitars and the like. Apart from setting up the Unison preamp emulations, nearly all of these features can be controlled directly from the Apollo 8p’s front panel. On the output side, meanwhile, there are four pairs of line–level analogue outputs and two independent headphone sockets. And, as ever, the I/O can be expanded digitally thanks to two pairs of ADAT optical sockets; the second pair is used purely for S/MUX capability at high sample rates, though, so there are only ever eight ADAT ins and outs available.

The Apollo 8p’s rear panel features a socket for the external power supply, ADAT S/MUX I/O, a pair of Thunderbolt ports, word clock I/O, eight quarter–inch audio outputs and eight combi–jack audio inputs. Like previous Apollos, the 8p is a sturdily constructed 1U device. Unlike its forebears, it’s painted black, but it still looks very sleek. There’s no fan, so the 8p is mostly silent in use, though the review model did emit a very faint high–pitched whine on some occasions. Nor is there an internal mains transformer, so power reaches it through a ‘line lump’ supply and a four–pin latching XLR connector. Sadly, though, UA haven’t found space inside the Apollo 8p’s lavish packaging to include a Thunderbolt cable, so you won’t actually be able to use it without popping into the Apple Store first. I’ve said it before and I’ll say it again: selling a £2000$3000 product without the one essential cable it requires is simply not good enough.

UA’s Unison technology is the logical culmination of the most significant breakthrough UA made with the original Apollo: the ability to employ the company’s celebrated range of ‘Powered Plug–ins’ not only at mixdown, but also on live inputs. Real–time use of Powered Plug–ins is handled through the UA Console utility, which received a makeover earlier this year. It is still bedecked in classy retro–tinged graphics to chime with the vintage nature of many of UA’s plug–ins, and there’s no denying it looks great, though I sometimes found it outgrowing the screen on my 13–inch MacBook Air.

As before, there’s a special slot at the top of each mic/line channel for Unison plug–ins, which interact with the circuitry in the 8p’s preamp stage, and all channels have four insert slots for conventional UAD2 plug–ins. This includes the two Aux channels, which would typically be used to add effects such as reverb and delay, and the eight Virtual channels, which appear as outputs within your DAW and can thus be used to process previously recorded audio within the Console.

Perhaps the biggest change in the new Console is that it’s now possible to switch insert plug–ins in and out of the record path on a per–channel basis, where previously this was just a global setting. This, to my mind, makes the whole concept much more appealing, allowing you to commit to processing that you’re certain you want to keep, while leaving your options open elsewhere. Other improvements, such as the ability to see all the aux and cue sends on every track within the main mixer, are more minor but welcome nonetheless. There are still a few utility features that would be nice to have, and which are offered by some rival upmarket audio interfaces — phase and correlation metering, M–S decoding and polarity switches on all channels spring to mind — but all in all, I think that if you can’t set up a decent cue mix with the current version of Console, the problem doesn’t lie with the Console! 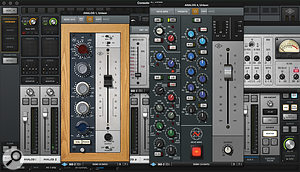 UA’s revised Console software.When I reviewed the Apollo Twin, there were only three Unison–enabled plug–ins available. These emulated, respectively, two versions of UA’s own 610 valve preamp, and the API Vision channel strip. Nearly two years on, Unison–enabled plug–ins remain fairly thin on the ground, with the only additions to the line–up being the Neve 1073 and 88RS emulations. As luck would have it, I had to hand a 500–series chassis and the current AMS Neve 1073LB preamp module, so I dug out my trusty U87 to see how closely the Unison emulation matched up to the real thing (or at least, to one version of the real thing).

Both the plug–in and the hardware versions feature an attenuation control which allows you to drive the preamp stage harder, introducing progressively more coloration without clipping the devices downstream. As I turned the gain up and the attenuation down, I found it a little easier to hit the ‘sweet spot’ between ‘too clean’ and ‘too gritty’ on the hardware 1073LB. The Unison 1973 seemed to pass over into outright distortion more abruptly, and as I wound the gain up, it also struck me as being a touch darker–sounding than the ‘lunchbox’ unit. However, I should emphasise that this was not a scientific comparison, and there are any number of variables that could be responsible for slight differences. In particular, the Unison 1073 emulates an original console version of the preamp with its EQ section (though I had this switched out for my tests), which itself probably wouldn’t sound exactly the same as the 1073LB.

What can’t be disputed is that the Unison–enabled 1073 plug–in definitely offers an instantly recognisable ’Neve–ish’ sound and, provided care is taken to set it up correctly, provides a sweet and highly usable way to add character at the tracking stage. Though it would still be nice to see Unison–enabled versions of some of the other channel strips in the UA armoury, the choice of Neve or API undoubtedly sees the two most important options ticked off.

Recent interfaces from fellow offenders in the not–supplying–a–Thunderbolt–cable stakes, such as Apogee and Focusrite, have embodied a rather different philosophy from UA’s. According to those manufacturers, the ability of Thunderbolt interfaces to deliver very low round–trip latency makes the need for separate cue–mixing utilities redundant. When you can monitor input signals through your DAW with a negligible delay, there’s no longer any need to complicate things by adding in a separate mixer; you might as well use your DAW’s own mixer window and plug–ins at the recording stage, just as people always have done in Pro Tools TDM and HD systems. This helps to keep things simple, eliminates the need to switch applications during recording, and allows you to carry the DAW monitor mix you build up during tracking over seamlessly to the mixing stage — something that’s less straightforward with monitor mixes created in UA’s Console utility.

If you avoid using any UAD plug–ins during recording then the 8p is actually perfectly capable of supporting that way of working, but that would be to ignore its main selling point. For many people, the simplicity of cue mixing within a DAW is outweighed by the attractions of a coherent, integrated DSP system offering real–time access to a range of very high–quality plug–ins. Many of these plug–ins are unique to the UAD2 platform, and whereas lots of other plug–in manufacturers copy the look, feel and sound of classic hardware without any acknowledgement, UA make a point of properly licensing plug–in emulations from the companies that created those designs. If you compare the 8p with other interfaces offering similar I/O counts and audio specifications, then take into account that you’re getting eight channels of officially sanctioned Neve or API preamplification as well, the need to use a separate Console utility seems a small price to pay.

Compared with the original Apollo, the 8p’s extra preamps and better monitor–control features are both very welcome, and although I’m not sure the differences will be sufficiently profound to tempt existing users to upgrade, the Apollo 8p is now the most obvious point of entry for new users into Universal Audio’s world — and a very tempting one it is, too!

One area in which the 8p scores over the original Apollo is in the provision of front–panel monitor control. As before, a large rotary controller adjusts the output level appearing at the main Monitor outputs, and pressing this mutes the output. However, it’s now also possible to define either one or two additional pairs of alternate speakers, which, if used, are connected respectively to line outputs 1/2 and 3/4. A dedicated ALT button mutes the main Monitor outputs and routes the signal instead to outputs 1/2, while another button labelled FCN can be configured either to switch to the second pair of alternate monitors, or as a Dim control. The main level/mute rotary switches along with the selection, controlling whichever output pair is currently selected.

This makes it very easy to switch between main monitors and alternate ‘grot box’ speakers, as many mix engineers like to do. However, there’s still no provision to configure either Console or the Apollo’s monitor control for any surround format; nor is it possible to operate a talkback system from its front panel.

At the lowest 32–sample buffer size and a 44.1kHz sample rate, Studio One reported the 8p’s output latency of around 1.5ms. This is comparable with the figures achieved by rival Thunderbolt interfaces, and plenty low enough to make software instruments feel responsive. Input latency, meanwhile, depends on the Console utility’s internal delay compensation setting; by turning this off and not using any Unison plug–ins I was able to get this down to 3ms at the same sample rate. A total round–trip latency of under 5ms is not quite on a par with some Thunderbolt rivals, but better than most Firewire or USB interfaces achieve, and more than adequate for real–time monitoring if you do choose to do this in your DAW.

The 8p is an evolutionary product rather than a revolutionary one, but offers several worthwhile improvements over the original Apollo.