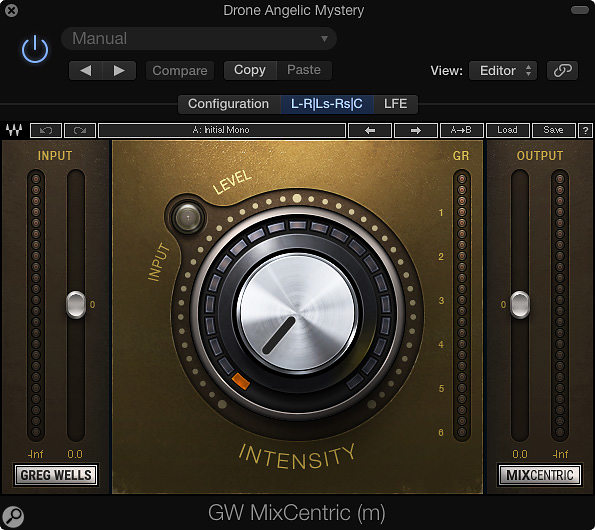 A trio of easy-to-use plug-ins from Waves aims to bottle the signature sounds of pop producer Greg Wells.

Available as separate products, but also as a suite, Waves’ latest series of signature processors is designed to fulfil specific mix applications where ease and speed of use are important. MixCentric is designed to be used as a bus or overall mix processor, while PianoCentric is suited to refining piano and other keyboard sounds, and following the same logic, you can probably guess what VoiceCentric is intended for! If the name Greg Wells is not familiar, suffice it to say that he’s a very successful producer, songwriter, musician and mixing engineer who’s been nominated for a Grammy award and has worked with artists such as Adele, Katy Perry and OneRepublic. To create this series of plug-ins, he worked closely with Waves to emulate his own typical processing chain for each task. (Watch the video below as Greg takes you through the VoiceCentric plug-in.)

All three plug-ins are available in mono and stereo versions for all the common Windows and Mac OS formats, in line with the rest of the Waves range. They can be authorised to a specific computer, to the Waves Cloud or to a standard USB stick. The plug-in header bar is also consistent with the rest of the Waves line, with preset loading and saving functionality, A/B switching between settings and so on all available as usual.

MixCentric isn’t a complete, one-stop mastering plug-in in the vein of iZotope’s Ozone or IK Multimedia’s T-Racks; it does not, for example, include a brickwall limiter, but its focus instead is the specific processes a mastering engineer might choose to employ in trying to add density and life to a mix or submix.

With all of these plug-ins, setting the input and output levels correctly is important, so there are both input and output level sliders, each with a long meter. The input needs to be set just high enough to have the indicator to the left of the large control knob hover around the yellow zone — green is a touch low and red means you’re in danger of overcooking the process. Once this is set, the output fader can be adjusted so that you hear the same level when the plug-in is bypassed as when it is active. This saves you falling into the ‘loudest sounds best’ trap.

While MixCentric looks simple, and indeed is simplicity itself to operate, there’s a lot going on behind the scenes. Once the levels have been set, the large central Intensity knob is basically a ‘more of everything’ control. It starts out doing relatively little, and then piles on increasingly more processing as you move further clockwise. A gain-reduction meter shows how much compression is being added, and this can be fine-tuned by adjusting the input level fader setting. Once you get past halfway around the dial the sound becomes more cohesive and starts to take on an up-front character. Keep going and you can dial in just a little aggression, which could work well for livening up a drum bus mix.

If you have the expertise, you could achieve similar results by combining EQ, compression, harmonic enhancer-style enhancement and subtle overdrive, but this plug-in really takes the effort out of doing it the hard way. While it is perfect for those who lack confidence with complex combinations of plug-ins, the results are good enough that I’m sure it will also prove be attractive to professionals who just want to save a bit of time.

The PianoCentric plug-in follows a similar format, but with two extra controls, which add variable amounts of preset delay and doubling treatments. This time the central control, which has keyboard-style markings around the edge, has a centre-neutral configuration; moving anti-clockwise produces a progressively darker and more lo-fi sound, with quite peaky filtering that lops off both the highs and lows, while moving clockwise from centre brightens the sound in a way that makes it stand out in the mix. Some of the filtering on the ‘dark side’ sounds a bit extreme in isolation, but within a mix it can work spectacularly well. I suspect there’s more going on here than just EQ, though the exact recipe remains a secret. The doubler probably owes something to the Waves Real ADT and sounds very organic, unlike regularly pulsating chorus effects. 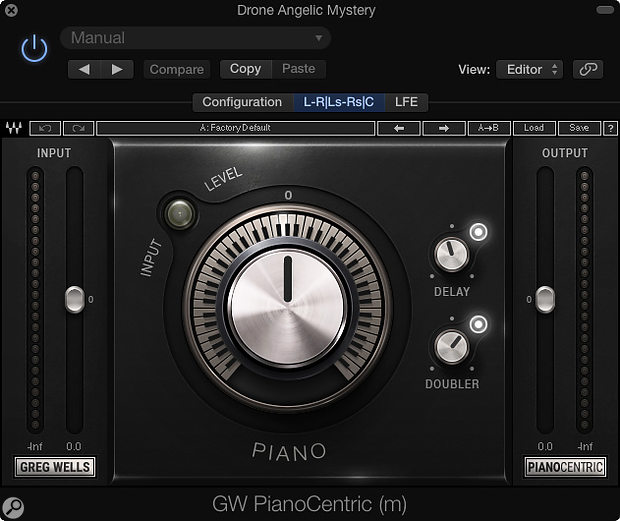 Before trying this plug-in I wondered if there was a need for it — a piano is a piano, right? — but having tried it I can confirm that in the world of pop, where piano sounds sometimes need to be ‘bent to fit’, it is a wonderful tool. It is remarkable how a fairly boring piano sample can be transformed into something either lush or assertive, and that extreme filtering pays dividends in shoehorning a piano into a tricky mix without allowing it to take up too much space. The preset delay works for most things if mixed in at suitably low level, while the doubler is just magical in creating fat, lush pop or ambient piano sounds. I tried a few experiments with synths and other sampled sounds, too. It won’t work for all synth sounds but it can dish up a few alternative flavours, some of which may surprise you.

I don’t know how many times we’ve been asked how to make a vocal sound more ‘produced’, but it must be rather a lot. Usually it’s about a tasteful blend of EQ, compression, reverb, delay and maybe some other types of ‘fairy dust’, but the new Greg Wells VoiceCentric Plug-in is about as close as it gets to a one-knob solution. Again, the user interface is almost startlingly simple; in essence, there’s one large Intensity knob that controls the strength of the main ‘produced’ effect and three smaller knobs that adjust the amount of added Delay, Doubler and Reverb. As with PianoCentric, these effects are pretty much preset, so the only control you have is over level. 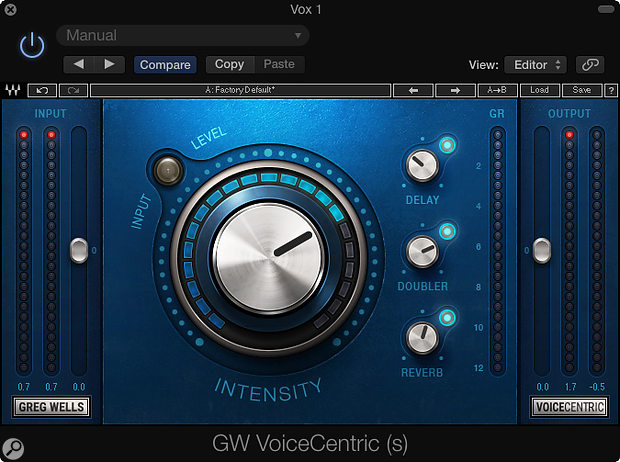 Intensity adjusts multiple parameters to increase the subjective strength of the underlying processing, with more extreme settings sounding brighter and more ‘in your face’. Once you’ve arrived at a setting that flatters the timbre of the voice you can then go on to adjust the three effect level controls. Those effects are tastefully tuned to produce a polished result with minimum effort; the delay seems to have been equalised to make it sit nicely behind the vocal, while the reverb just adds the required amount of ‘wet’ without seeming to get in the way. Again the doubler seems similar to the Waves Real ADT plug-in and manages to create a plausible double-tracked sound by adding delay and also varying degrees of pitch/time change. At lower settings it thickens vocals without being too obvious, whereas at maximum you get something akin to the full John Lennon treatment.

I tried this plug-in on a number of tracks I’d already mixed, in place of the three or four plug-ins originally deployed on those tracks, and I have to say the results were very encouraging. The processing pushes the vocal nicely to the fore and the choice of effects is very supportive, while if you want more reverb, you can easily add your own using a separate plug-in. I preferred settings around the middle of the Intensity dial but if you’re into more assertive vocal styles, the upper reaches also produce artistically useful results.

Summing up then, these may be ‘instant gratification’ plug-ins, but they are far from being mere toys. I very much enjoyed working with them, and they really do produce polished results with minimal effort. They’re easy to use, affordable and effective. What’s not to like?

All three Greg Wells plug-ins are capable of excellent results on a wide range of material — though it still pays to learn how to create effects the ‘hard’ way, for when you come across something that requires an unusual treatment!