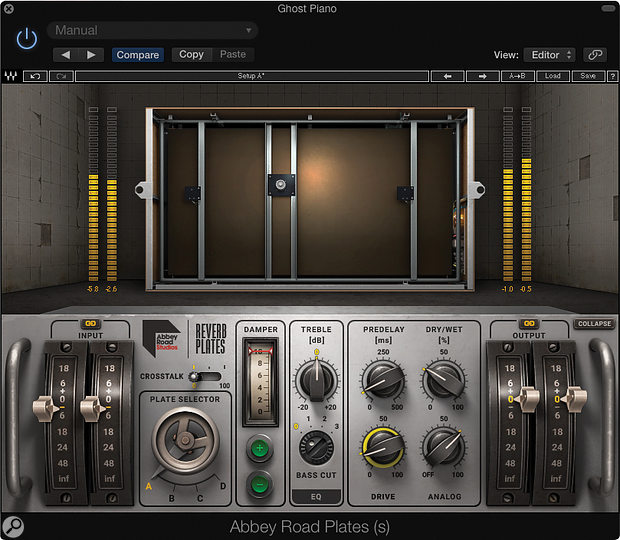 Waves took on the challenge of modelling four modified EMT 140 plates used at Abbey Road Studios on countless classic recordings. Did they succeed?

Plate reverbs are notoriously difficult to model because of their very fast ‘build up’ time and because of the complexity, density and subtle coloration of their reverb tails. Spare a thought, then, for the software engineers at Waves who took on the challenge of modelling four modified EMT 140 plates used at Abbey Road Studios, which can be heard on albums from countless top-shelf artists, from the Beatles to Pink Floyd. EMI’s Central Research Laboratories designed hybrid solid-state pickups and amps for plates A, B and C to lower the noise floor, while Plate D has all-valve circuitry with a rather different character.

In each case, Waves have modelled the harmonic distortion of the driver, pickups and output amps as well as the acoustic properties of each plate, including the way it interacts with the dampers used to reduce or increase the reverb time. In an actual EMT 140 plate, which measures around 8 x 4 feet, a thin steel plate is suspended vertically on springs allowing it to vibrate when fed from a magnetic driver mounted near the plate’s centre. Acoustic waves fan out from the transducer and then reflect back from the plate edges, quickly producing a very dense reverb with a slightly metallic coloration. Two transducers configured as pickups are mounted between the excitation driver and the plate edges to produce a pseudo-stereo output, which is then fed to a pair of output amplifiers. Reducing the reverb time is achieved using a fibreglass damping panel hung parallel to the plate but not touching it. Reducing the gap shortens the reverb time while moving it away increases it. All this has to go in a sound-isolating box, making it an extremely bulky and heavy piece of studio kit.

The Waves Abbey Road Reverb Plates plug-in GUI provides a pictorial representation of a plate, with some very retro-looking controls arrayed below it. When active, ‘vibrations’ can be seen emanating from the driver and moving over the plate, but clicking it converts these to a waveform display. The plug-in can be instantiated in mono, stereo, or mono-in/stereo-out versions. Old-school quadrant faders set the input and output levels, though the bar-graph level meters are bang up to date. A rotary wheel that looks like something from a submarine hatch selects which of the four plates is active; apparently this graphic was inspired by the original Plate Damper wheel. Plus and minus buttons adjust the virtual damper position, yielding a decay time between about one and six seconds, as well as some timbral changes.

The bass cut control acts on the drive circuit to reduce low-frequency rumbles, while Treble is a high-shelf cut/boost filter designed either to add brightness or to darken the highs. Drive models the way the original amplifiers and transducers behave at high signal levels while Analog adds in a little hum and hiss for those who want to get even closer to the original sound. Crosstalk may be faded in or out to emulate the input cross-channel leakage of the original design. Pre-delay adjusts the delay between the dry signal and the plate reverb, which would once have been set up using a tape machine.

One reason the four plates sound different is that the sound changes depending on the spring tension holding the plate in place, on the particular piece of metal used to make the plate, and on exactly where the transducers are mounted. Plate A sounds large and expansive, while Plate B is a little brighter and tighter-sounding, with C moving even further in that direction. It is also noticeable that at lower damper settings, Plate A has a rather longer reverb time than B or C, though they all have similar decay times at their maximum settings. Plate D is most similar in character to Plate A, but with some valve-like roundness and smoothness to the tonality. Turning the Analog knob up to maximum brings in just the slightest hint of background noise, and even that differs between plates, though I doubt any would be audible in a real world-mix. With Analog set at maximum, the hum and noise level is the same as on the original plates.

In all cases the plate sound is nailed perfectly, whether creating a short room-like sound or a long wash. Turning up the Drive adds a bit of grit as both the electronics and the transducers are driven harder, but it is very musical if not overdone. I set up my UA Plate 140 plug-in as a comparison and found that it sounded rather different from any of the Waves plates. By tweaking the EQ controls it is possible to get the characters of the two plug-ins to converge to a limited extent, but I rather like the fact that the Waves and UA products each have their own characters drawn from studios on opposite sides of the Atlantic. In general I’d say the Abbey Road circuitry mods have resulted in a warmer sound than the standard EMT design.

Abbey Road Reverb Plates really comes to life when you use the plug-in in a mix. All four models work their magic on piano, drums, vocal, electric guitar — in fact just about anything you care to throw their way. There’s a real sense of weight and three-dimensional space, despite the fact that a real plate is essentially a two-dimensional acoustic device. You can almost hear all the weight of that huge metal plate. And when damped right down to one second or so, plates B and C sound lovely on drums or percussion if you just want to add life without a big wash of reverb. This is one product that probably doesn’t need a bypass button, and could well end up being your go-to reverb for just about any pop or rock production work. Now if only Waves would give their software engineers a long holiday to give us a chance to catch up with reviews of all their other new plug-ins!