Turbosound are no strangers to the world of big-box PA systems, but how good is their new compact column speaker?

Conceptually, Turbosound’s new iP1000 PA system follows the increasingly familiar format of a tall, thin ‘line-array’ style speaker column sitting atop a subwoofer. Though this type of speaker is commonly referred to as a ‘line array’, technically it is a hybrid design, as there’s only one tweeter. However, the waveguide is designed to match the dispersion of the main drivers, and this is a very similar approach to the one used in my own Fohhn system.

Since 2012, Turbosound have been a part of Music Group — the company that owns Behringer, Klark Teknik, Midas, Tannoy, Lab Gruppen, TC Eelectronic, TC-Helicon, Bugera and a growing list of others —  and what that means in practice is that various technologies can be shared between the brands. More specifically, the iP1000 incorporates Klark Teknik’s mature and highly regarded DSP and amplifier technology.

Manufacturing of the iP1000 is handled at Music Group’s own factory complex in China, which is how the product can be offered at such an attractive price. The Fohhn system I use myself is of a very similar size, but the cost of the iP1000 would barely pay the VAT on mine!

Aside from keeping visual intrusion to a minimum, such systems tend to be portable (this one weighs just 24.8kg), they have a very wide horizonal dispersion (up to 120 degrees, in this case), and because of their use of multiple small drivers, the crucial mid-range speech register is covered with more clarity than you might expect from a typical ’12-inch woofer plus tweeter’ arrangement. In the iP1000, the mids and highs are covered by eight neodymium drivers specifically designed for this system, each just 2.74 inches in diameter, teamed with a one-inch, horn-loaded ‘super tweeter’. All the drivers are housed in the upper 60 percent of the single-section aluminium column, and they are protected by a powder-coated, perforated-steel mesh grille. The column locates into the top of the sub enclosure via a multi-pin connector and four locating bars, so all you have to do is drop the top in place and you’re good to go.

All the electronics are packed into the dual eight-inch subwoofer, and include 1000 Watts of Class-D amplification fed from a switched-mode power supply. A DSP section provides a three-channel digital mixer, presets for system EQ, the active crossovers and also safety protection, including separate HF and LF limiting. Birch ply is used for the black-finished subwoofer housing, and there’s a grab handle built into the top. Mains comes in on the usual IEC socket with adjacent power switch, though unlike many switched-mode systems, this one is not universal voltage.

Audio may be streamed to the iP1000 via BlueTooth, and there’s a free app that can be used to control the mixer (though it can also be controlled directly from a panel on the sub, as there’s little to adjust other than the channel levels and overall EQ). When using a single iP1000, the streamed audio is summed to mono, but when another ‘slave’ iP1000 is connected to the ‘master’ speaker’s Link XLR output, the BlueTooth can be configured to operate in stereo. 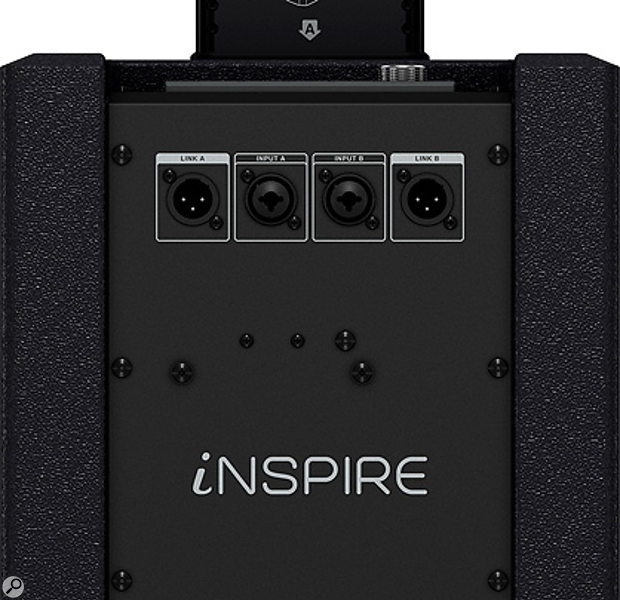 The base unit houses two eight-inch LF drivers, plus all the necessary electronics and amplification for the column, and can accommodate two mic/line inputs on ‘combi’ XLR/jack connectors, in addition to its BlueTooth streaming channel.The integral mixer offers two ‘combi’ jack/XLR inputs that can accept balanced or unbalanced signals (there’s no phantom power option) at mic or line/instrument level, and the control panel uses a rotary encoder with integral push switch to select and then adjust the various functions as shown in the backlit, blue 128x32 LCD window. There are four switches marked Process, Setup, Exit and Enter, and the operation is so intuitive there’s no need to look in the manual.

All of the system’s mixer functions and DSP can be controlled via the base unit’s menu system and encoder..

There are four ‘System EQ’ voicing options, called Music (actually a flat response, and the setting I used for most of the tests), Live (bass boost), Speech (mid boost) and Club (a ‘smile’ curve), and in addition to these there’s a separate Position EQ setting to optimise the low end for when the speaker is placed near walls or corners. There’s a further global three-band EQ, offering simple bass, middle and treble control, and input gain control is provided for the analogue and Bluetooth inputs.

When assembled, the system stands just under two metres tall, with the sub being only a shade over 260mm in width. The iOS app is designed to automatically detect and self-configure for mono or stereo master/slave setups once the BlueTooth pairing has been taken care of. However, having only a single system for test, I can only vouch for its mono operation. The app’s GUI is very simple, with just one page showing the level and EQ controls and a second the global system parameters. 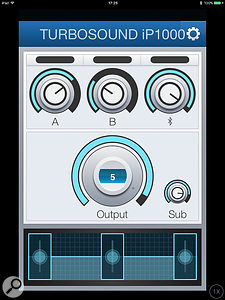 The control app offers remote access to the iP1000’s features, including its built-in EQ.

The manual for the system is very basic but it does get you up and running in minutes. Setup is simple but, like all the similar systems I’ve looked at, the column is only supported at the base and probably wouldn’t take kindly to a drunken reveller barging into it. The manual says that the dedicated control app is free from the App Store, but it stops short of actually telling you what it’s called. All my attempts to search for it in the App Store brought up driving games with ‘Turbo’ in the title but no sign of the app I wanted, so I accessed it from the Turbosound web site which obligingly locates the Turbo Control App for you in iTunes. The BlueTooth paired very readily and the free app accesses all the control functions you can get to from the sub’s control panel, but doesn’t appear to offer anything extra.

With the system set for a flat response, the tonality when using a good dynamic vocal mic was clean and clear, with the Voice preset adding a mid hump that could be useful for some events. The Live and Club settings also work as expected, and these can be tempered using the fixed frequency three-band EQ if desired.

Music playback usually shows up how poor some budget PA systems actually are, but the iP1000 did a very creditable job, leaning much more towards a ‘hi-fi’ sound than most similarly-priced conventional boxes. There was also plenty of level, with a nice solid bass but without excessive boom. The sub level can be adjusted independently of the top, but the default setting seemed about right to me. A pair of these should be quite loud enough for a pub band PA, while a single unit would work well for solo performers, duos or even for wide dispersion monitoring.

In common with other compact line-array-type systems I’ve tried, the horizontal dispersion is usefully wide while the narrowed vertical dispersion helps keep from spraying sound onto the floor and ceiling.

Given the performance and portability of the system, not to mention the very attractive price, I have to say that I’m impressed. And if you need a hint more power and bass extension, there’s always the slightly larger iP2000.

The nearest alternative is probably one of the HK Elements systems though LD Systems also make an affordable compact line array. JBL also announced one earlier this year, but we haven’t yet had one to test.

A solid performer at a surprisingly attractive price.