Yamaha's latest monitors may look like the classic NS10s, but looks can be deceiving...

The passive, sealed-box Yamaha NS10 is something of a studio icon, and it's an image that Yamaha seem to be capitalising on, with the white speaker cones of their new HS7 model. This active speaker even has a mesh grille protecting the tweeter, just like the NS10. However, the HS7 is a very different beast from its predecessor, not least in that it is a ported design, specifically made for small-studio monitoring. The NS10, on the other hand, was originally conceived as a music playback speaker for home use, but was 'adopted' by the studio industry because of its clear mid-range and the lack of choice of suitable nearfield monitoring at that time.

Yamaha's HS series comprises the HS5 and the HS7, and either model can be used alone or teamed with the HS8S subwoofer. 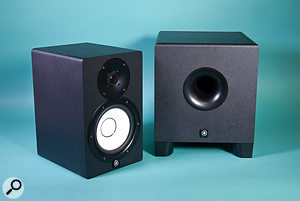 I usually discourage the use of subwoofers in smaller studios as the extended bass end can exacerbate the acoustic problems that are prevalent in small, untreated rooms. However, a smaller sub, such as the HS8S, does have the advantage that you can put the main speakers where they meet ergonomic requirements while placing the sub in a position that gives the most even bass response. In my own view the sub would be best combined with the HS5s as the HS7s already have enough low end for most small spaces (they are specified as covering 43Hz to 30kHz, but where the studio is garage-sized or bigger the HS7/sub combination would be appropriate.

Built into rear-ported, rigid MDF cabinets (210 x 332 x 284 mm) with jointed corners, the 6.5-inch woofer and the one-inch dome tweeter are driven by a combined total of 95W of power (60W for the LF driver plus 35W for the tweeter, crossing over at 2kHz). The weight is a reassuring 8.2kg per speaker. Rear porting cuts down on port noise but it does mean the speakers shouldn't be placed too near a wall as the ports may be obscured, upsetting the bass response. Finned heat sinks are fitted to the rear panel and, again, these need to be unobstructed to allow proper cooling. There's been no attempt to ward off cabinet-edge diffraction as all the baffle edges have been left square, even though the upper and lower corners of the box are rounded. A black plastic foil covering gives the cabinets a very sharply finished appearance that sets off the white cone of the woofer, while the tweeter sits flush with the baffle surface, in a shallow, recessed dish.

On the rear panel are controls to adjust 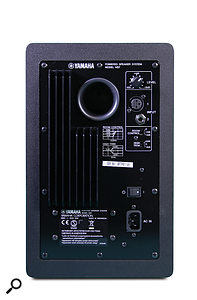 The HS7 features controls for adjusting the speaker's bass and treble response. the bass to compensate for placement relative to boundaries, with options for flat, -2dB or -4dB below 500Hz. There's a high-trim switch for adjusting the HF to the taste of the user, with 0dB, -2dB and +2dB settings. Input can be on balanced XLR or balanced/unbalanced quarter-inch jack.

The HS8S sub has a 22Hz to 160Hz frequency response. Its black foil finish matches the main speakers, and all the connectors and controls are on the metal rear panel along with a finned heat sink for the power amplifier. A single, downward-facing, eight-inch driver, protected by a metal grille, is fitted to a front-ported MDF cabinet and driven by 150W of amplification, where an internal crossover splits the stereo input to feed the sub (in mono) and the two main speakers. Both low- and high-cut controls (each variable from 80 to 120 Hz but detented at 100Hz) are fitted to the rear panel for adjusting the crossover frequencies, and there's a low-cut on/off switch, which affects the feed to the main speakers.

A level control, again centre-detented, adjusts the sub's contribution to the overall sound, and there's a polarity invert switch, which may be needed depending on where the sub is placed relative to the main speakers. Inputs are available on both XLR and TRS jacks with the outputs to the main speakers on balanced XLRs. A footswitch for bypassing the sub and feeding full-range audio to the tops would have been useful as a mix-checking tool, but such a feature is absent from this model.

On their own, the HS7s have enough low-end extension to work perfectly well without a sub in a typical home studio. Their stereo imaging is good, though being critical I did find the overall sound to be less three-dimensional than the speakers I'm used to. This wasn't due to any lack of high end, but rather seemed to be a function 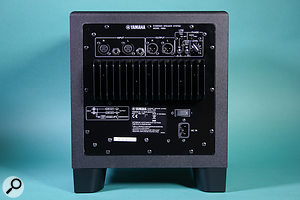 The subwoofer's internal crossover can be set anywhere between 80 and 120 Hz. of the mid-range, around the crossover region, which lacked a little focus. Putting this in perspective, though, these are relatively low-cost speakers that perform well given their price range. Teamed with the sub, the HS7s integrate well using the default 100Hz crossover setting, though I found myself adjusting the sub's contribution down slightly from the detented setting. The sub certainly fills out that lower octave in a very credible way, though the enhanced level of bass can detract from the mid-range unless it is mixed in at a very conservative level.

To sum up, the HS7s are capable of working quite happily without a sub but play nicely with one when necessary. They inhabit a price point that gives them quite a bit of worthy competition, however, so do check out the alternatives if you get a chance. Most importantly, the HS7s are not NS10s, they are very much their own speaker regardless of the cosmetics.

Despite its relatively small driver, the HS8S added plenty of depth at levels perfectly adequate for nearfield monitoring setups, though I'd still have liked a footswitch option to bypass the sub and feed full-range signals to the mains. There were absolutely no rattles or other untoward sounds, and because the crossover can be adjusted it should work perfectly well with other brands of powered monitor too.

In this price range the HS7s compete with the likes of Alesis, Fostex, Tannoy, Presonus, Prodipe and some of the budget Mackie models, all of which have their own character. There's also an increasing choice of active subwoofers, but where possible it is still safest to buy a model designed specifically to work with your main speakers.

Like all Yamaha products, these speakers are well engineered and perform well compared with similarly priced competitors. They are very different from NS10s, but that shouldn't stop you checking them out. The HS8S is impressive for its size, and can help in larger rooms or even smaller spaces where optimum monitor placement isn't possible.