Vocal Lix's samples are designed to be used in dance tracks and lean towards R&B in style, although there is also a folder called Dubplate Vocals containing dub and ragga style voicings, apparently provided by three of Jamaica's top artists.

As is usual for a Zero-G product, the samples have been formatted for use with every major software sampler, and now MOTU´s MachFive has been added to the list.

The content is rather unevenly distributed between nine main folders, titled Vocal Glitches, Vocal Loops 128BPM, Dubplate Vocals, Vocal FX, Oneshots, Songs, Phrases Male, Phrases Female and Vocal Song Kits. Vocal Glitches contains short, incomplete vocal busts, which might otherwise be achieved by partially triggering samples. My view is that it's better to have whole samples available and control their playback by altering either the note duration or the audio event, but here flexibility has been traded for speed.

The samples in Vocal Loops are slightly more inspiring. They are short rhythmical arrangements of glitch-like voice samples and could be used as the starting point for a track. The Vocal Song Kits take things further still, each containing a combination of vocal phrases and loops alongside well-produced bass lines and staccato synth patterns. These basic elements are like dance-track building blocks, although drums and soundscape-style synth pads are not included.

Longer samples are to be found in the male and female phrases folders. The main female voice is throaty rather than nasal, and quite soulful, 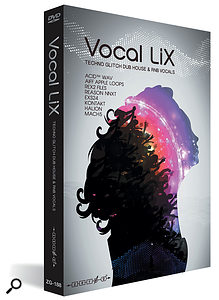 usually articulating phrases of up to half a dozen words, like 'You really don't like me'. The main male vocal, however, is so deep that it makes Barry White sound like a choirboy. If the producers haven't transposed it down for effect, then there is a worryingly large man somewhere out there scaring women with phrases like 'Ladies', 'Freaky', 'Baby' and 'Showman'. There is also another male vocalist who seems to have a mid-European accent disconcertingly like that of Arnold Schwarzenegger! Unfortunately I didn't find an 'I'll be back' sample.

In general, though, the vocal artists have been well chosen. Even the samples that are just short shouts or single words are full of character and power, making them eminently usable.

On the down side, the range of styles is narrow, largely because only a small number of artists were involved. The Jamaican Dubplate Vocals are probably the most interesting, simply because the performances are less controlled.

The inherent problem with Vocal Lix, and to some extent every vocal sample library, is that sung and spoken phrases are very distinctive, and so once they have been used in one prominent composition, it will be hard for someone else to feature them in their work and still sound original. That said, many producers will want to process and mangle the samples, using them rhythmically or as organic sound effects, and what they will find here is high-quality material to work from. Tom Flint