Learn how to mimic a classic analogue tape delay with Live's Looper device.

Live's Looper audio effect is just the thing for recording, looping and overdubbing a performance. Beyond that it is an excellent tool for emulating an analogue tape delay such as the various models of the now defunct Echoplex. Looper's basic operation was covered in the January 2010 Live column, which can be found at /sos/jan10/articles/livetech_0110.htm, so I'll concentrate on ways to set Looper up as a tape delay.

The core of any tape delay is a tape recorder, and typically the tape itself is a loop at least long enough to record the longest desired snippet of audio. The fact that the tape is in a loop is a convenience; reels large enough to not require rewinding during a session would do just as well. Furthermore, the length of the tape loop has nothing to do with the delay time because the tape is erased as it passes the record head. The delay time is determined by the tape speed and the distance between the record and playback heads. In the Echoplex units the tape speed was fixed, and you moved the playback head to adjust the delay time. Moving the head while playback was in progress became a signature, pitch-mangling feature of the Echoplex.

Looper, of course, has no tape; it records and overdubs to a fixed-length audio buffer while playing it back in a continuous loop. The length of that buffer combined with the playback speed determines the delay time — anything 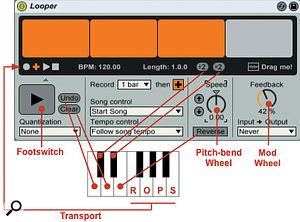 1: Here is one way to set up Looper as a Pre-mode send effect on a Return track. Suggested MIDI mappings are shown in red. The keyboard mappings are convenient if you use a secondary keyboard as a control surface (I use key range C-2 to B-2), but button controllers will do as well. For triplet delays, as described in the text, ensure that the mapped pitch-bend range is centred at 7 (-5 to 19, for example). recorded during one pass plays back at the same point in the next pass. Looper's Feedback knob controls how quickly old material fades out when overdubbing (at 100 percent it does not fade) as well as how quickly any background noise builds up.

You can insert Looper as an audio effect on any Audio, MIDI, Group or Return track to process virtual instruments, audio input or audio playback. The most versatile approach is to use a Return track, and screen 1 shows one way to set up Looper for this. I prefer to use Pre mode for the send because I can then use the send track's volume for the dry level while using the send amount together with the Return track's volume for the wet level. Here are the essential settings:

Looper's buffer size is set by the initial recording and is displayed as three digits: bars.beats.sixteenths. After an initial one-bar recording in 4/4 time, the ÷2 button steps you through delays of a half-note (0.2.0), quarter-note (0.1.0), eighth-note (0.0.2), 16th-note (0.0.1) and a 32nd-note (0.0.0). Additional clicks will produce even shorter delays. You can use the x2 button to return to longer delays, but keep in mind that the contents of the second half of the audio buffer is lost each time you 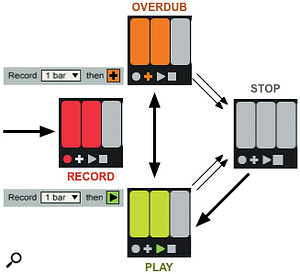 2: In this flow chart for the Multi-purpose button (typically mapped to a footswitch) a single arrow indicates a single tap and a double arrow indicates a double tap. When Looper is cleared, as indicated by no bpm value, a single tap starts recording. The 'then' button determines whether Looper enters Overdub or Play mode after the initial recording. A single tap toggles between Overdub and Playback, whereas a double tap stops (but does not clear) Looper. A subsequent single tap restarts playback. click the ÷2 button, and the current buffer contents is duplicated each time you click the x2 button. Setting the Speed knob to 7.02 (7 is usually close enough) reduces the delay time to the corresponding triplet. Because Looper uses Live's Re-Pitch time-warping algorithm, changing the Pitch knob will shift the pitch of any playing audio, so if that's not what you want, set the Pitch knob when the buffer is empty.

Once you have Looper set up, you start recording by clicking the large Multi-purpose button at the left of the control panel. Alternatively, you can click the small, round Record button in Looper's transport section just above the Multi-purpose button. You can, of course, use any MIDI-mapped controls instead of your mouse. After one pass, Looper changes to either Overdub or Playback mode depending on the status of the 'then' button to the right of the Record drop-down. Although you can record during the first pass, there are two reasons not to: the delay time is initially set to one bar (a whole-note in 4/4 time), and if the Speed knob is not set to zero, the pitch will be shifted when Looper changes to Overdub or Playback mode. Once you have the delay time and Speed set, Looper becomes an active delay in Overdub mode, whereas in Playback mode it simply plays back what's in its buffer. Use the Multi-purpose button or Looper's Overdub and Playback buttons to toggle between these modes. A double-tap on the Multi-purpose button will stop Looper and a subsequent single tap will restart Playback mode. You can get a lot more than simple tape-delay out of Looper with these controls:

Feedback: although active only in Overdub mode, this knob is your best friend. At 100 percent the loop will play forever and you can mangle it with the other controls. To clear the loop without resetting Looper, pull feedback down to zero percent for one pass.

Speed: during playback the Speed knob pitch-bends the buffer contents in real time. During overdub it affects only incoming audio; you won't hear the effect until the next pass, and the bend will be in the opposite direction.

Reverse: reverses playback of the current buffer contents. New overdubs are not reversed.

Undo/Redo: applies to notes and length changes since the last overdub. The undo/redo 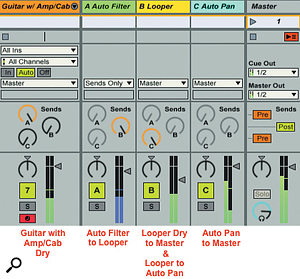 Clear: clicking this button clears the buffer in Overdub mode and completely resets Looper in play, stop or record mode.

You can insert other effects before and after Looper, but you'll have a lot more flexibility if you use separate Return tracks for those. Suppose, for example, that you're starting with a virtual guitar and you want to process it with Live's Amp and Cabinet effects, then use Auto Filter before Looper and, finally, use Auto Pan after Looper.

Typically you'd place the Amp and Cabinet effects on the guitar track so that everything receives the amp/cab-processed guitar. You could place the Auto Filter before Looper on the same Return track, but if you place it on its own Return track, you can send the amp/cab-processed guitar either directly to Looper or through Auto Filter to Looper. Likewise, if you put Auto Pan on its own Return track, you can use the Auto Pan track's level for the wet signal and use the Looper track's level for the post-Looper dry signal.

The examples here reflect my preference for using Return tracks, but you can do all the same things with nested Audio Effect Racks directly on the audio, MIDI or Group track you want to process with Looper. The benefit is a lower track count and fewer send buses. The cost is that you'll need to take care of signal management within the Audio Effect Racks.