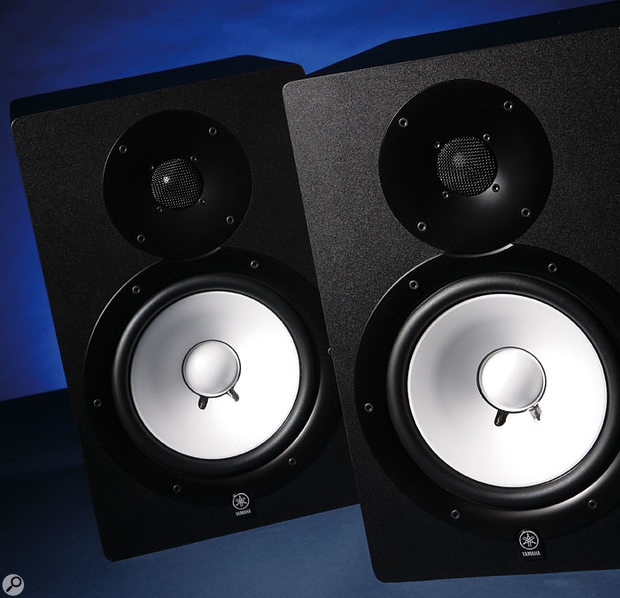 These new monitors from Yamaha add some low-end welly to the sound of the legendary NS10.

Although Yamaha's ubiquitous NS10 monitor attained almost 'industry-standard' status, they were never particularly accurate, especially at the bass end. Yamaha's new HS80M active model, however, has been designed with the intention of offering a flat and true reference with a realistic degree of bass extension. The cosmetic styling clearly owes something to the NS10, specifically the black, no-frills hi-fi-style case and white-coned bass driver, but in reality this is a very different product and features a significantly larger woofer.

If you want something more NS10-sized, check out the HS50M, which has a five-inch woofer. In deference to modern styling, the cabinet corners are slightly radiused, which may help reduce diffraction from the cabinet edges, but this is also likely to be useful in preventing you digging the sharp edges into yourself when moving the speakers. The HS80Ms are designed to be used in both stereo and surround configurations, and an optional subwoofer is available in the form of the HS10W.

Designed for nearfield and project-studio applications, the HS80M, like most small active studio monitors, is a two-way, bass-reflex design, bi-amplified via an active crossover (in this case set at 2kHz). The bass port is on the rear panel, which also sports a finned heat sink to cool the power amplifiers. In total there's 120W of amplifier power (75W bass, 45W treble) on board, delivering a 42Hz-20kHz response from the eight-inch bass/mid driver and one-inch domed tweeter. However, the frequency response is measured at -10dB, not -3dB, which is a bit naughty. Like the NS10, the tweeter is protected behind a metal grille, but a new addition is the very shallow waveguide-style baffle that is, presumably, designed to help control the dispersion at or near the crossover point.

Power comes in via the usual IEC socket on the rear panel, and there's a choice of balanced jack or XLR inputs. The gain-trim knob is accompanied by EQ switches labelled Mid EQ, Room Control, and High Trim. The Mid EQ offers a choice of flat, 2dB boost, or 2dB cut centred at 2kHz, while the Room control offers a choice of flat, -2dB or -4dB shelving at 500Hz to help level out the bass response when mounting the speakers close to walls or corners. By contrast, the High Trim switch offers the same cut or boost options, but works for frequencies above 2kHz. A further Low Cut switch rolls out the low end at 80Hz or 100Hz, or leaves it flat, allowing the speakers to work at their maximum bass extension. There's no reason to cut off the bass end this high unless you were checking a mix for compatibility with small consumer systems or radios, so it might have been more useful to locate this particular option on the front panel.

Because there are many conventional CRT monitor screens still in use, especially in video facilities, the speakers are magnetically shielded. With a case size of 250 x 332 x 390mm and a total weight of 11.3kg per speaker, the HS80Ms are a little larger than the old NS10s and, of course, the onboard amplifiers make them heavier. In fact, the footprint is almost exactly the same as for my Mackie HR824s. 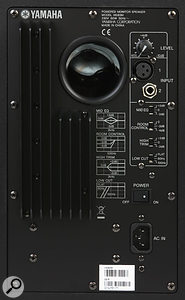 In the studio I used the HS80Ms both to play back some of my mixes in progress and also to play back some of my reference CD tracks. The Yamaha logo lights up when the speakers are active, and I did all my tests with the EQ switches set to their default, neutral positions. The stereo imaging is really very good and the sound is very revealing of detail, in much the same way as the original NS10s were, but I found the sound slightly aggressive for my own tastes and would probably find it fatiguing after long periods. Still, I felt exactly the same about NS10s, but that didn't stop them being popular, and a number of leading engineers still swear by them. The rear-panel switches can be used to modify the response to some extent, but they do little to change the essential character of the speakers.

Where the new model is definitely not NS10-like is at the bass end, because these speakers have plenty of depth. Despite the rear porting, the bass also stays reasonably even; something that can be a problem with other rear-ported designs in rooms that don't have optimal acoustic treatment. I didn't feel the bass was as tight as from some other speakers I've worked with, and tapping the woofer cone gently reveals a distinct note. This is typical of many smaller speakers tuned to give the most solid bass response possible, but it is no worse than any other 'small to medium' monitor in this respect. Overall, I'd say the sound is reminiscent of an NS10, but with a decent amount of bass extension, and a lot of users will want exactly that.

If you like NS10s, but you need something that delivers plenty of level with a decent amount of bass to bring out those bass synths, bass guitars, and kick drums, then the HS80M is going to be right up your street. As I said earlier, its sound is a bit on the forward side for my taste, but don't let that put you off, as it could actually encourage you to work harder on producing smoother-sounding mixes, and that's no bad thing. The pricing puts these speakers in the middle ground, as far as the project-studio market is concerned, and that's probably about fair, given their pedigree and level of performance. Oddly, the spec sheet gives no indication of the maximum SPL these speakers can produce, though to my ears they sounded suitably generous in this respect. If you're an NS10 fan and are in the market for a full-range active monitor with plenty of clout that retains the essentials of the family sound, then make sure you take the HS80M for a spin before making your final choice.

Within this price range, you might want to look at the Fostex PM1s or even the smaller and less costly PM05s, as well as the Alesis M1 Active MkIIs. The Tannoy Reveals also fall in this price range, as do the KRK RP6 and RP8. You also have a choice of the Event ALP5 and SP6 or the Genelec 8020As. If you can stretch your budget a little further, there's the Event 2020BAS (bi-amplified system), which has just dropped in price. Also consider the slightly more expensive Dynaudio BM5As and Mackie HRM624s.

Yamaha's HS80Ms bring the NS10 concept up to date in an active package that can deliver a decent amount of low-end clout without adding a subwoofer. Their slightly aggressive sound won't be to everybody's taste, but I'm betting a lot of people will find that they are just what they're looking for.