Waves are tempting owners of Yamaha digital hardware with an updated DSP board and a new selection of additional plug-in processors.

The three plug-ins in Waves' Power Bundle have already been reviewed by SOS in their Mac or PC incarnations, but they've now been ported to run on Yamaha's digital mixers and AW multitrack recorders that are fitted with either a software-updated Y56K card or the newly optimised Y96K. Both of these cards fit the YGDAI expansion slots built into the mixers and recorders, and provide a selection of Waves effects and processors together with eight channels of ADAT optical I/O. In this review I'll be taking a look at both the Power Bundle and the new Y96K card.

Both Y-series cards already come with bundled Waves plug-ins, including Renaissance EQ and Compressor, L1 Ultramaximizer, Trueverb reverb, Super Tap delay and the self-explanatory Waves De-Esser. The Power Bundle adds three further plug-ins to the list — Renaissance Vox, Renaissance Bass and L2 Ultramaximizer — and these can also be purchased and installed individually if so desired.

Renaissance Vox is a very straightforward vocal compressor/limiter that combines elements of the L1 limiter, Renaissance Compressor and a noise gate into a single interface featuring just three controls. Renaissance Bass is a simplified version of Waves' Maxx Bass enhancer, used for generating harmonic frequencies that deliver a more powerful-sounding bottom end. Once again, there are just a few controls for simplicity's sake, so setting it up is merely a case of adjusting the relative mix of harmonics and original bass, the effect's cut-off point and the output level.

L2 Ultramaximizer is very similar to L1 although, if anything, it provides a little more warmth and a touch less clarity. It's also noteworthy that L2 substitutes L1 's Digital/Analogue Domain button (for optimising the output signal headroom) with an ARC/Release option. ARC is Waves' variable release mechanism that changes the limiter's release time according to the demands of the source material, and has been designed to emulate characteristics of vintage buss compressors.

The Power Bundle software is freely downloadable from the Waves site, but can't be installed until a User Account is created and the software purchased, after which a code is sent via email. The card has to be placed in Update mode and hooked up to your computer's parallel port before the install procedure can begin. Entering the code when prompted automatically generates a new Authorisation Challenge code, and both of these have to be copied into the on-line account, whereby yet another code is delivered for pasting back into the installer! It's all a bit longwinded, but quite an effective foil against piracy, I suspect. 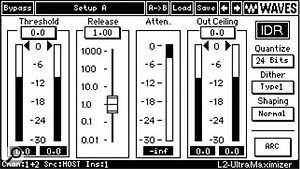 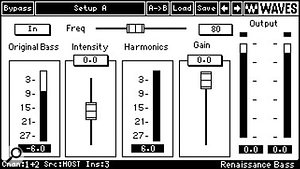 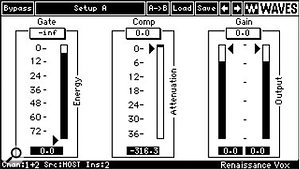 It's a pity that the updater is Windows-only, and worrying to read that a power failure during the 30-minute update process may damage the card's OS. Once the download is complete, though, all the processors integrate into the system seamlessly, and their use is limited only by the capabilities of the card's DSP chips.

The 56 and 96 cards are virtually identical, except that the latter can work at 48, 88.2 and 96 kHz, and can accept new plug-ins immediately. The 56K requires the installation of the free Maintenance Update software before it's ready to receive plug-ins, but that's not much of an issue, and the updater even includes the short version of the Supertap Delay found on the 96. The Y96K's firmware is optimised so that it can be easily integrated into the latest Yamaha digital mixers including the DM2000, DM1000, 02R96 and 01V96, although it will also work in an AW4416 or 2816. However, it is compatible with the older Yamaha mixers. Installing the card couldn't be easier; you just shove it in the slot and away you go. Patching it into the system is only as complicated as the host mixer makes it, and thereafter, its operation really is a no-brainer (for more on this, please refer to our original Y56K review at: www.soundonsound.com/ sos/may02/articles/wavesy56k.asp).

As is often the case, if you want to use the Y96K at higher sample rates, you will sacrifice valuable channels. In 44.1/48kHz mode, up to eight mono or four stereo channels of processing are available, each with five processor slots, but the channel count both for processing and ADAT I/O is halved in 88.2/96k mode. It's also a shame that the Y96K doesn't provide a USB port for its updates; given that many laptops no longer have serial ports.

As you'd expect from tried and tested plug-ins, all three processors in the Power Bundle work extremely well, and seem to have the same glossy sound quality exhibited by the menu standards. It's probably fair to say that L1 and Renaissance Compressor are already capable of doing roughly the same job as L2 and Renaissance Vox, so these are not totally essential additions, but anyone regularly producing commercial recordings will probably find them worth having for the extra mix and mastering options. It's certainly tempting to go straight for the Vox processor when treating vocals and, more often than not, there's no need to look any further.

The value of Renaissance Bass is more obvious; although it's not a treatment for every occasion, it is unlike anything offered by Yamaha's internal effects, and can be really handy during mixing when something like the rhythm section needs a bit more clout to underpin the rest of the track. Indeed, it might have been better to include a high-frequency enhancer of some sort instead of L2 (I find enhancers really useful during mixing, particularly for adding sparkle to vocals, and I also occasionally use them on whole mixes for mastering), as this is not something offered either by Yamaha's onboard effects processors or the Y cards, and it would nicely complement Renaissance Bass. Admittedly, Waves don't seem to have an existing plug-in that quite fits the bill, which is probably why they decided on L2, but there are other options that would develop the card's mastering credentials, such as their C4 multi-band compressor. It may seem a little tight to make such complaints when, at £135 in the UK, the Power Bundle is such good value, but until other plug-ins are made available for the Yamaha cards, the options are important.

If you already have a Y56K card and use the old-style Yamaha mixers then there is little reason for purchasing the Y96K, as the system will be unable to take advantage of the improved processing, and once the free Maintenance Update is installed, even the 56K is able to run the Power Bundle. If, however, you've invested in any of Yamaha's more contemporary digital mixers, then it makes more sense to own the similarly specified Y96K. It's just a shame the channel count is cut in half at the higher sampling rates, and that updating still can't be done via a USB port, or without a Windows OS. It would also be comforting to know that Waves intend to make more of their products available to 'Y-card' owners at similarly reasonable prices, as that would make the relatively expensive hardware more of an attractive purchase.