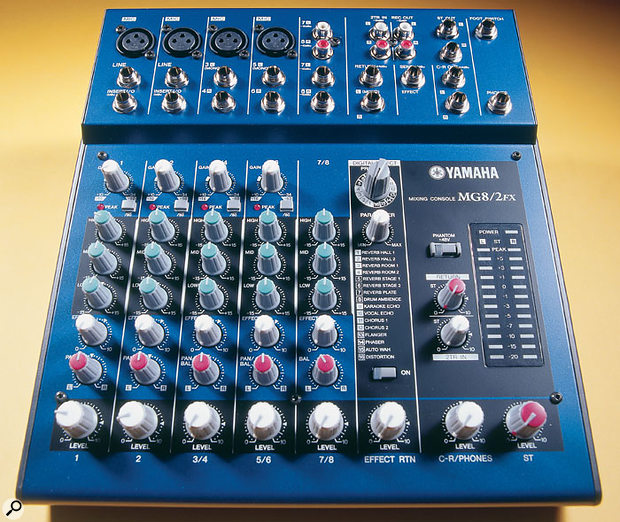 Mixers come in all kinds of sizes and with all levels of complexity, but sometimes you need something really simple that just gets the job done. Yamaha's MG8/2FX seems to have been designed with simplicity in mind and has absolutely no unnecessary frills, though it does have a very capable effects processor on board that can rustle up some suitable live reverbs and other basic effects. Powered from an external PSU with a screw-locking connector, the MG8/2FX has eight main inputs plus a stereo return and a two-track input, so it is conceivable that you could mix up to 12 sources.

The first two channels are mono mic/line, while the second two (3+4 and 5+6) can double as mono mic or stereo line inputs. Two further line-only inputs are available for channels 7+8, which offer a choice of both jack and phono inputs, and all five channel strips include a three-band equaliser with a mid-band control set at 2.5kHz. There's no EQ bypass, but the controls have a centre detent. The high and low controls operate at 10kHz and 100Hz respectively, and all three bands have a gain range of ±15dB.

Input gain trims and switchable 80Hz low-cut filters are fitted to the first four strips (the ones with mic input XLRs), and all five channel strips have main rotary faders, effects sends (feeding the internal effects processor), and pan/balance controls. No input gain controls are available for the channel 7+8 inputs, so their levels must be controlled at source if they are not in the right range for the mixer.

Note that there is no pre-fade foldback send, and the post-fade effects send knob feeds the internal effects processor, though it is also sent to the outside world via a jack socket if you feel the need to connect an external processor instead. Although this mixer seems best suited to live applications, it has both a main output and a control-room output, as well as RCA phono tape outs that mirror the main output. The tape input and stereo return both have level controls, and both these sources feed directly into the main mix.

A headphone output, which is controlled by the C-R/Phones Level knob, provides plenty of level for monitoring, but there are no mute or solo buttons, so all you really hear is the same thing as appears at the main output, but with independent level control.

The master section is gratifyingly sparse, with level controls for the main output, the phones, the effects return from the internal processor, the stereo return input, and the two-track input. A pair of 12-section LED meters monitors the mixer's output level and a prominent button activates global 48V phantom power for use with capacitor mics or active DI boxes.

Also within the master section is the effects processor, where a 16-way rotary switch selects the effect type and a further Parameter control adjusts the most important parameter of the selected effect. Typically this will be reverb time or delay repeat time. All the effects types are listed on the front panel. A switch with a large yellow status LED is used to switch the effects on and off, though another practical concession to the live performer is the provision of a footswitch socket for bypassing the effect using an optional Yamaha FC5 footswitch. Note that whenever a new effect is selected the Parameter value is set to minimum, whatever the physical position of the control, so you need to move the control if you prefer a different value.

When I first tried the reverbs, I thought they sounded more like early reflections programs, because the Parameter value default meant they were set to minimum decay time. Once the decay is increased they sound reasonably convincing, and they're certainly good enough for most live applications, though they don't rival Yamaha's studio reverbs.

The first eight programs explore various types of reverb (Hall, Room, Stage, Plate, and Drum Ambience types) so you get a rather better choice of practical treatments than you get with some mixer effects sections, and in most live situations reverb or delay is likely to be the effect of choice. Amongst the other effects are two types of delay, the usual modulation variants (phase, flange, and chorus) plus distortion — which sounds pretty nasty to me, though somebody might find it useful.

There's nothing at all complicated about using this mixer, so even a newcomer can approach it with confidence. The audio path is clean, and the main line inputs and outputs are balanced, so long cables can be used with no problems. I found the EQ to sound musical enough, but the choice of a 2.5kHz mid-band frequency isn't always practical for live use, as you're often likely to want to pull out some of the low mid-250Hz range to cure room coloration or close-miked boxiness, but on a mixer of this price it isn't a big deal.

Not having PFL buttons makes the process of optimising gain structure a little less straightforward than it might be, but my usual ploy is to set all the channel controls somewhere near unity gain, then adjust the input levels using the Gain trims so that the mix can be handled with all the faders in something like the same position. Using rotary knobs for the fader controls rather than sliders saves on cost and space, but isn't as ergonomic, though the white caps and thick pointer lines make it very easy to see what gains are being used, even in poor lighting conditions.

All small mixers like this involve compromises to keep the costs down, but what you're left with here is still a very practical package for the solo act or duo needing a mixer to run as part of a small PA system. Having a good choice of reverbs plus the ability to adjust the reverb time also counts for a lot. As I said earlier, these aren't the best studio reverbs, but they are fine for most live applications where the artificial reverb is further diffused by the room's own reflective properties.

There's nothing really unusual about this little mixer, and in the UK it has inexpensive competition from the likes of Behringer, Samson, and Peavey, but I think its better-than-average effects section makes it a strong contender. It doesn't have enough facilities to be used as a serious recording tool, but for simple live performance where you don't need to drive a foldback system from a separate pre-fade mix, it's really very good and covers all the basics. I'm not a big fan of external power supplies, but, to be fair, most small mixers use them and this one at least has sensibly thick cables and a locking connector.

Small analogue mixers will always tend to be a compromise between size, features and cost, but in this case I feel Yamaha have probably got the balance just about right.

If you simply want to mix some line and mic sources, add a bit of decent reverb, and have basic EQ on the various channels, the MG8/2FX is ideal. It's only real shortcoming is that the lack of pre-fade sends means you can't set up a separate monitor mix.