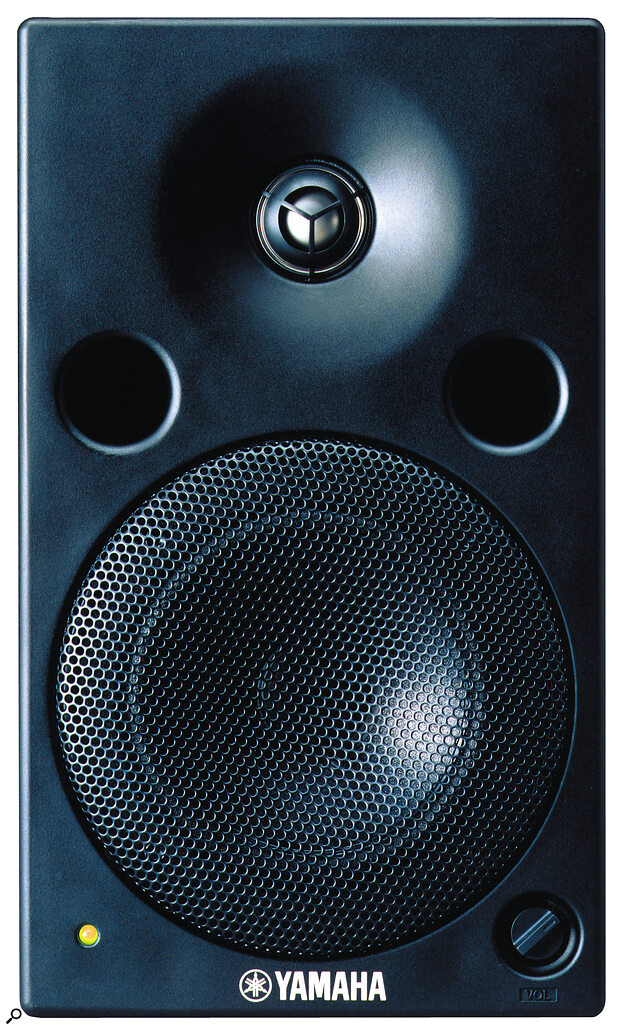 Apart from the ubiquitous NS10s, Yamaha monitors have never made much of an impression on the project studio market, particularly in the UK where there are so many excellent local designs to choose from. Will their new MSP5 suffer the same fate, or could it become the active NS10 of the late '90s?

The MSP5 is one of the smallest active monitors I've come across, yet it can deliver up to 101dB SPL at 1 metre on axis, which is louder than I care to monitor at for any period of time. What's more, a frequency range of 50Hz to 40kHz is claimed, though the provided frequency response plot clearly shows an 80Hz tuned hump at the bass end, a gently scooped mid range and a little HF lift with a slight dip at the crossover frequency.

Unlike most studio monitors, the MSP5s are built into chunky moulded plastic enclosures rather than MDF cabinets, and measure a compact 169x279x222mm, including the confidence‑inspiring heat sink required to cool the power amplifiers. The design is a fairly conventional ported 2‑way arrangement, using a 12cm cone bass/mid driver and a 2.5cm titanium‑domed tweeter in a dished baffle to help control the directivity. Both drivers are magnetically shielded for use near computer monitors. Few details are given concerning the origin of these drivers, but I'm assuming they are of Yamaha's own manufacture.

Driving the two speakers are a 27W power amp on the high end and a 40W power amp on the low end, with the crossover frequency set at 2.5kHz. The bass/mid driver is protected by a perforated metal grille, while the tweeter has a front‑mounted phase ring that helps keep prying fingers away from the diaphragm.

Two small ports, roughly 25mm in diameter, are used to tune the cabinet, while slide switches are fitted to the rear of the box to adjust the HF and LF response to suit room placement and taste. The LF switch has four positions providing +1.5dB, 0dB, ‑1.5dB and ‑3dB of bass adjustment at around 60Hz; the HF trim switch has three positions offering flat reponse or 1.5dB of cut or boost at 15kHz. A recessed front‑panel gain trim control allows the sensitivity to be adjusted, and input is accepted either on unbalanced jacks or balanced XLRs. A green LED on the front panel shows when the speaker is on, and power comes in via a captive mains lead and a rocker mains switch.

Having had experience both of other monitors that use titanium tweeters and Yamaha's NS10s, I wasn't surprised to find that these speakers exhibited a slightly 'forward' character. Setting the HF switch to the ‑1 position produced a better tonal balance, at least to my ears, though on some of my test material, the vocals still tended to sound just a touch spitty or sibilant. However, the overall balance is actually pretty good, and the bass end is remarkably solid for such a small monitor. The stereo image is also quite reasonable, and though the mid‑range is a little more confused than on more esoteric monitors, these speakers showed themselves quite capable of revealing detail within a mix. I found it mildly disconcerting that the blast from the ports tended to part my hair, even when I was sitting a metre and a half from the monitors, but these aren't by any means the only speakers to do this. The sound holds together without sounding strained up to quite high monitoring levels and my ears chickened out before the monitors did, so SPL shouldn't be a problem for most people.

The MSP5s are something between nearfield and desktop monitors, and are capable of delivering a loud, solid sound with a reasonable amount of bass extension. They have something of the NS10's tendency to sound a little aggressive at the high end, but they're certainly very usable, and because they're magnetically shielded, they are well suited to the desktop computer‑based studio where space is a problem. Personally, I'd prefer something a little more neutral to mix on, but those who already mix on NS10s, should also be able to manage with these. The MSP5s are also well suited to monitoring while composing, because they can produce enough level and enough low end to create the right vibe while you're working. And of course they'd sound great if you wanted to stop work and play the odd computer game!

An affordable powered desktop monitor for use with computer workstations or in the home studio. Not as neutral as some monitors, but then neither was the NS10!