If you want a modern take on the classic NS10, this monitor might be just what you're looking for.

Yamaha's new nearfield MSP7 monitor is the larger of the two models in the MSP range, the other being the MSP5, and either can be augmented by the optional SW10 subwoofer if you feel the need for more low end. If weight is anything to go by, these should be very good speakers indeed — at 218 x 330 x 235mm they're slightly smaller than my Mackie HR624s, but they weigh a very solid 12.2kg each. Though conventional, the cabinets are well engineered, probably from MDF, and are very nicely finished in satin black, with rounded front corners on the vertical edges. 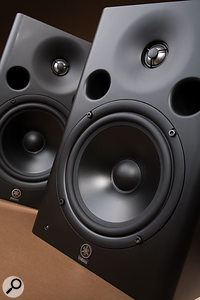 Unlike Yamaha's best-known monitors, the passive NS10s, the MSP7s are fully powered, two-way speakers. An 80W amplifier drives the 6.5-inch woofer and a further 50W amplifier looks after the one-inch, titanium-dome tweeter. This accounts for the weight, as the amplifiers incorporate a very substantial heatsink assembly. The overall frequency response is quoted as 45Hz to 40kHz, but this is at the -10dB points, rather than the more usually quoted -3dB points. Reading from the response curve graph, this makes the lower frequency cutoff point closer to 55 or 60Hz in real money. The steep, 30dB-per-octave active crossover that feeds the two power amplifiers operates at 2.5kHz, and the maximum on-axis level is a perfectly adequate 106dB at one metre. Magnetic shielding is used, so the monitors work nicely alongside CRT displays and, as with many active monitors, there are rear-panel controls for tailoring the response to the environment or to user preference.

The 6.5-inch woofer comprises a treated polypropylene cone, set into a roll-rubber surround, and features a very rigid cast-magnesium basket to support the cone and the magnetics. The one-inch tweeter is fitted with a central phase plug, suspended on three struts. This helps control the dispersion angle and offers some physical protection. This particular tweeter is capable of working up to 40kHz and is driven by what Yamaha describe as 'a powerful magnetic circuit,' with the aim of providing an extremely fast response for the accurate reproduction of transients. The tweeter assembly sits in a shallow waveguide to maintain a more constant dispersion, and the cabinet has two frontal ports to tune the bass end. As with many ported cabinets, the bass end rolls off quite quickly once it drops below the port tuning frequency. The tweeter and woofer are mounted centrally, so there is no left or right speaker — they are acoustically symmetrical. Because of the driver layout, the best way to use these speakers is vertically, as that gives the widest sweet spot. 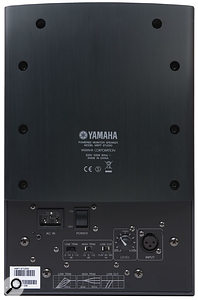 If you want to tweak the response, there's a low-cut switch with flat, 80Hz or 100Hz settings, as well as separate high and low trim switches. The LF switch offers positions for -3dB, -1.5dB, flat or +1.5dB at 45Hz, while the high-end switch can add or subtract 1.5dB (with flat in the centre position) at 15kHz. The low-cut switch could be useful set at 80Hz in very small rooms, where bass coloration is a problem, but typically these settings would be most useful for checking the 'radio friendliness' of mixes. In other words, you'd get your mix sounding good on the full-range setting, then check that it sounded OK with the restricted low-end settings.

On playing my standard test tracks, I was surprised by the dramatic stereo imaging of these speakers and also their uncanny ability to lift transients out of the mix. It's almost like being able to hear more of everything, but the trade-off is that the high end sounds quite pushy, in a similar way to the revered NS10s. In fact, the overall feel is of an NS10 dragged kicking and screaming into the 21st century — with more power and better bass extension, but the same 'lively' character. I've never been a huge NS10 fan, because I tend to find many metal tweeters fatiguing to listen to. The titanium ones employed here have the same sort of assertiveness about them, which could be tiring on long sessions. However, the ability of these speakers to separate elements within a busy mix should not be underestimated, and if you don't mind the somewhat presumptuous top end, these speakers are surprisingly analytical.

The amp packs deliver more than enough level for close listening, and you have to work pretty hard to get the clip LED winking. If anything, the low end has a slightly 'rounded' feel to it, characteristic of many tuned port designs with a steep roll-off. Subjectively, though, it is the type of sound expected from a medium-sized studio monitor, and most people should feel very comfortable with it for general mixing. Certainly there's a lot more low-end punch than you could ever get from an NS10. You can tailor the tonal balance to some extent using the rear-panel switches, but this doesn't actually change the character of the high end a great deal; it simply adjusts the level balance with the low end.

If you like working with NS10s — and many professionals still swear by them — the MSP7 is definitely worth a closer look and listen. It doesn't suffer from the missing low octave of the NS10 and, as it's active, you're unlikely to vaporise tweeters as easily as you could with those revered old monitors, as the amps and drivers in the MSP7 are optimally matched. This will never be the monitor of choice for the 'soft dome or bust' brigade, and it has a noticeably more sizzly sound than my Mackie HR624 monitors (which use aluminium for the dome material), but if you are comfortable with the extended high end of titanium tweeters, I think you'll be impressed by just how revealing these speakers are.

The MSP7s have an NS10-like character but without that speaker's weaknesses. The overall sound is quite 'forward', which won't suit all users, but both the transient definition and stereo imaging are excellent.