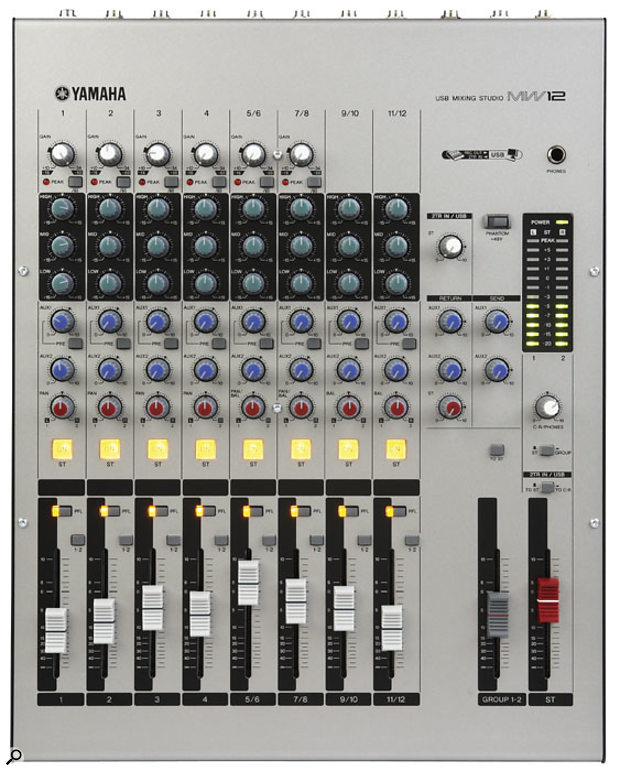 A compact analogue mixer that also acts as a stereo USB audio interface.

The MW12 is a 12-channel analogue mixer with a built-in 16-bit/44.1kHz USB interface, allowing a stereo mix to be sent directly to and from a Mac or PC. A copy of Steinberg's Cubase LE is bundled with the mixer, demonstrating just how keen Yamaha are to promote this part of its feature set. Without a computer attached, however, the MW12 functions just like any other hardware mixer of this size. First and foremost, the Yamaha MW12 is a studio-oriented product — it doesn't, for example, have any of the built-in effects that are often found in mixers of this size intended for live use. Nevertheless, its feature set includes a few output busses that could easily be routed to fold-back monitors, and the chassis, derived from Yamaha's MG-series live sound mixers, should withstand a few knocks.

Apart from the headphone jack output positioned on the top panel, all of the MW12's inputs and outputs are round the back of the unit (pictured above right). The mixer can be fitted with side brackets for mounting it on top of a rack, in which case having the I/O at the back would be ideal.

Most prominent are the six phantom-powered XLR sockets, four of which are routed to the mixer's mono channels, together with four balanced quarter-inch jack sockets. Each of the four mono channels also has its own unbalanced TRS jack insert point, allowing a processor such as a compressor or gate to be inserted into the signal path between the EQ and fader.

Stereo channels 5+6 and 7+8 are slightly different in that they offer three different input options. If just a mic is connected via the XLR, its signal is distributed to both the left and right channels. However, there is also a stereo pair of balanced jack sockets that take priority over the XLR if used. A mixture of the two input types can be achieved by plugging a jack into the right-channel input only. This automatically routes the XLR signal to the left channel and the jack signal to the right. A mono signal can also be fed to both sides by using just the left-channel jack input.

The remaining channels, pairs 9+10 and 11+12, offer slightly different options again. There are left and right jack sockets, this time unbalanced, and these are joined by a pair of RCA phono connectors. The manual suggests that all four inputs can't be used together, but this is not quite correct. In fact, the jack and phono inputs simply get mixed together, albeit at a reduced level. The mixer's remaining inputs consist of a stereo aux return on balanced jacks and a pair of RCA phono inputs labelled '2TR In' which share the same input path as the signal returned from the computer via USB.

As far as outputs are concerned, for the main stereo mix there is a choice of XLR or balanced TRS jack outs, plus a line-level stereo output on RCA phono sockets. The latter is labelled 'Record Out' and is intended for use when sending the mix to DAT, CD-R and other two-track recorders. The remaining outputs are all on balanced jacks — a pair for the Control Room output, a pair of outputs from the mixer's stereo group buss and two more carrying the send signals from aux busses 1 and 2.

The four mono channels have identical facilities, headed by a gain control offering a 44dB range, a peak indicator LED and a high-pass filter (80Hz, 12dB-per-octave). The EQ is a simple fixed three-band design offering +/-15dB, with high, mid and low bands centred at 10kHz, 2.5kHz and 100Hz. The high and low bands are shelving filters, whereas the mid band is of the peaking variety.

Next in the path are two aux send controls, the first of which has a pre-fade switch allowing you to take the send from either before or after the channel fader. A pan knob is followed by a button labelled 'ST' which turns the individual channel's routing to the main stereo buss on and off. A PFL (pre-fade listen) button feeds the channel's pre-fader signal to the headphones and Control Room outputs, while a button labelled '1-2' routes the channel output to the mixer's group buss, regardless of whether the ST button is on or not. The group has its own master fader and rear panel outputs so that it's possible to set up a custom stereo mix and output it separately.

The first two stereo channels — 5+6 and 7+8 — have identical controls to the mono channels, however 9+10 and 11+12 are missing the gain knob, peak LED and high-pass filter, and are best suited for receiving the returns from an effect processor connected to one of the Aux outputs, or for accepting the output of stereo sound modules with plenty of gain adjustment of their own.

In the master section is the aforementioned stereo group fader, plus the master fader. There's a 12-segment meter, a global phantom power on/off button, aux send and return controls and a level knob that controls both the headphone and Control Room outs. These outputs can be switched to monitor either the group or main stereo buss, and you can also route the group buss to the main stereo buss, should you wish to.

The final control worth highlighting determines the level of the USB return signal, which can be sent to either the stereo buss or the control room/monitor buss. All of the mixer's 60mm faders are scaled to provide the most control around 0dB — the area from -10dB to +10dB occupies more than half of the fader's travel.

Yamaha are not the first manufacturer to build a mixer with built-in computer interfacing. A Firewire option card is available for Mackie's Onyx mixers and the Alesis Multimix Firewire range offer Firewire interfacing as standard. A closer comparison to the MW12 might be Alesis' 12-channel Multimix 12 USB mixer, which also ships with Cubase LE and even includes a digital effects processor. It's a little cheaper than the MW12 but can't quite compete with the Yamaha's routing and I/O options. The Behringer Xenyx 1222FX also costs less than the MW12 and comes with an external two-in, two-out USB audio interface.

I tested the performance of the MW12 by feeding it and my Behringer Eurorack MX1602A mixer the same audio source. The Behringer is a cheaper product with a lacklustre EQ, but I'd previously tested its 'ultra-low noise' preamps against those of an Allen & Heath Mix Wizard and they'd fared quite well, so I consider it to be a good benchmark. Having matched the levels as closely as possible I concluded that the Yamaha behaved a little more evenly across the audio spectrum and seemed a touch less noisy than the Behringer, although the difference in gain scaling made it impossible to come to any definite conclusions.

The MW12's preamps do begin to get rather noisy when they are pushed to their maximum level (as most designs tend to) but you only have to back off the gain about 10 percent before it ceases to pose a problem, and I found that there was more than enough gain for me to DI my electric guitar without having to push either the preamp or channel fader to its maximum.

Having three bands of fixed EQ is limiting, as it pretty much rules out the possibility of making any really precise adjustment to an input signal. Nevertheless, Yamaha seem to have picked the right filter shapes and frequency points to ensure the EQ is effective as a general tone shaping tool on the majority of sound sources. What's more, even the most extreme boosting and cutting still sounds quite natural, which in my book is the mark of a good EQ. It would, however, be advantageous to have a bypass button as this makes it quick and easy to A/B any adjustments against the un-EQ'd signal.

Recording the USB output into the supplied Cubase LE software is fairly straightforward, although it is necessary to follow some of the setup instructions in the manual in order to establish the correct signal routing. On my PC, the Device Wizard was summoned when I connected the mixer, adding the USB Audio CODEC to the Cubase LE ASIO Multimedia setup window. I was then able to select the MW12 as the default device and as the active I/O ports, as advised in the manual notes.

From then on recording is simple, even if establishing the optimum monitoring setup is less so. The ST switch of each mixer channel determines whether the signal is sent to the USB port, and this routing is made post channel fader, pre master fader. The output level from the computer is controlled by the mixer's 2TR In/USB knob, but it's necessary to route the incoming signal to the control room buss rather than the main stereo buss to avoid re-recording it during overdubbing. Overdub monitoring level can be set against the pre-recorded playback without affecting the recording level by using the master fader.

There were no problems with latency, but there was a considerable amount of noise present when monitoring the USB return, although this didn't affect the quality of the recorded audio.

The MW12 is designed with flexibility in mind so that the user can make the best possible use of its limited channels and I/O in whatever setup they have. If, for example, you are not using an external effects unit in the aux loop, the inputs double as a spare stereo input, while the group buss could be used to feed custom mixes to anything from stage monitors to effects modules. The insert points on the four mono channels are a definite plus point too, as they open up the possibility of using dynamics within the signal path.

Semi-pro mixers typically come with output options for feeding the stereo signal directly to DAT machines or tape recorders, but now the home computer can be added to the list, and getting a copy of Cubase LE bundled free is a definite bonus. There are a few minor complaints to make — globally switched phantom power is a touch restricting, there's no EQ bypass switch and the USB output is noisy — but nevertheless, for the price, Yamaha are offering a very well-designed mixer.

A really well-made mixer with only a few minor limitations. Proof that hardware and software each have their strengths, and a combination of the two can often provide the best solution.