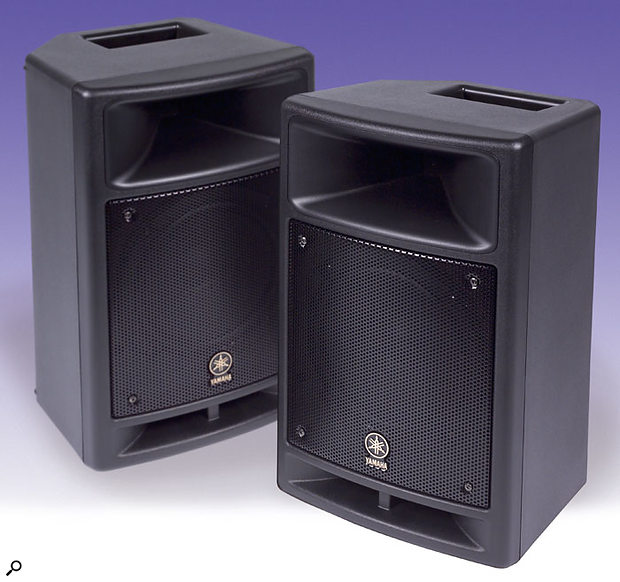 An affordable complete vocal PA you can carry from the car to the stage in one trip!

Yamaha's Stagepas 300 is a surprisingly compact yet reasonably powerful stereo sound system comprising a pair of moulded, passive two–way speakers and a small powered mixer that stows into a recess in the rear of one of the speaker cabinets for transport or storage. The other speaker has a similar recess with a removable cover for stowing cables or mics. According to the specifications, the mixer's dual power amplifiers can produce 150W per channel into 6Ω with 10 percent distortion or 100W per channel with one percent distortion. Given that the system's mixer-amp is little larger than a decent box of chocolates, that is quite remarkable. Sadly, the accompanying documentation doesn't say what kind of amplifier technology is being used, but to make the amp this small and light I suspect that they're using some kind of Class–D circuit or, at the very least, a switch–mode power supply.

The speaker cabinets, which measure approximately 18 x 11 x 10 inches, are moulded from a tough, resilient plastic with no obvious resonances but, unusually, they don't have a pole–mount fitting built in. You have to buy external stand adaptors as accessories if you wish to stand–mount the speakers, which seems rather odd to me, as how else would you use them? Both speakers are identical, so either one can hold the mixer amp while the other can be used to store the supplied speaker and power cables or a couple of mics. To secure the mixer into the rear of the speaker, there are two twist locks that can be opened with any suitable coin, and the mixer is stowed 'controls out', so that it can be used while still fitted to the speaker if necessary (although the front panel would then be 'sideways on' to the user, if the speakers were being used upright). I'd prefer catches that didn't require tools to open, but even musicians tend to have the odd coin about their persons and the catches actually work very well. All the connections, including the IEC mains inlet, are on the top of the mixer.

The cabinets, which are quoted as having a 55Hz to 20kHz frequency response, each contain an eight–inch mid/woofer speaker and a one–inch HF compression driver feeding a moulded horn flare. Passive crossovers inside the speakers operate at 4kHz, and a strong, perforated–steel grille protects the cone driver. (This may be a budget system but it is built to the usual Yamaha standards of engineering.) The amplifier's response extends down to 20Hz and up to 20kHz (–3dB/+1dB), measured at an output of one Watt and at a distance of one metre. Maximum SPL is a respectable 112dB which, considering that the whole system weighs only 18kg, is pretty impressive. A preset limiter, with corresponding red LED on the mixer's front panel, is included in the amplifer section to protect against hard clipping. 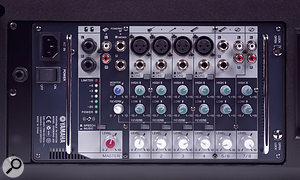 The mixer offers four mono mic/line channels which can each access the basic built-in reverb (but not in variable amounts), plus two stereo channels offering jack and/or phono inputs. High/low EQ is available to all channels. Other features include jack outputs for connecting powered monitoring and a pair of phono recording outputs.

The little mixer is fan cooled (the fan is quiet enough for most live sound applications) and offers eight inputs in all. Four of these are mono mic/line channels featuring both quarter–inch jack and balanced XLR mic inputs. There's no phantom power on the latter, which is a shame. The remaining four inputs are presented as two stereo line channels offering quarter–inch jack and/or phono inputs. Each channel has low (100Hz) and high (10kHz) EQ controls (with a +/– 15dB range), as well as a rotary level control, while the four mono mic/line inputs also have illuminated reverb–select switches in place of the more familiar post–fade effects–send knob. A master reverb control adjusts the overall amount of reverb added, but as there is no variable send on the channel strips, the reverb amount is the same for all channels on which the reverb switch is engaged. Though the reverb doesn't come close to studio quality, it has a useful 'reverb meets echo' character that is suitable for general singing or — dare I say it — Karaoke!

In the output section, which is on the left of the mixer, rather than the right, where you'd normally expect it to be, are a five–LED level meter, a master level pot, and a further Monitor level control feeding a stereo pair of jack outputs that are ideal for connecting a pair of powered stage monitors. The two phono outputs in the same area are intended for use as recording outputs, when connected to an external recorder. There's also a Speech/Music switch that seems to create a slightly 'scooped' response in the music position, much as a conventional loudness button does, but arguably to more subtle effect.

Steel handles help to protect the front of the mixer when stowed, and although the main body of the mixer housing is made from resilient plastic, the front panel is metal and all the jacks are fixed with metal nuts, not plastic ones. As the mixer is stowed 'knobs out', you need to be reasonably careful how you pack it in your car, unless you have the optional gig bag, which I'd highly recommend. 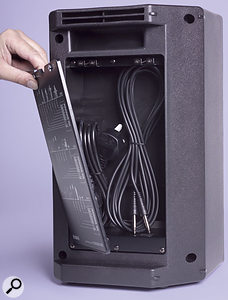 The useful storage compartment is ideal for the mains lead and 5m speaker cables that are included with the system. The mixer slots into the storage space on whichever speaker isn't being used for cables.

I tested the Stagepas with its speakers perched on tables, as the review system didn't come with the stand adaptors (the omission of these as standard is perhaps the worst practical failing of the system). It's also worth mentioning that, unlike some other compact PA alternatives, you can't fasten the speakers face–to–face to protect them in transit (another good reason to invest in the optional gig bag). Plugging in the included mains and 5m speaker leads takes just moments, after which you're ready to go.

Although the speakers are quite small, they carry vocals very clearly, and even do reasonable justice to full–range material at lower levels. The coverage angle is a good compromise, and although the high end is understandably hotter 'on–axis', the overall sound is well balanced and resists feedback rather better than some small systems I've tried. There's enough vocal level to handle smaller pub gigs for bands or duos, and I rather liked the effect of the admittedly basic built–in reverb. Alternatively, the Stagepas 300 would make a great rehearsal PA for your front room or garage and could double as a compact stage–monitoring system. I used it for a fairly spirited band rehearsal and it delivered bags of vocal volume without undue feedback problems. It's not recommended to drive the system so hard that the limiter LED comes on, or sound quality will suffer somewhat, but the built–in Limiter is still a useful form of speaker protection.

The Stagepas 300 is strictly 'no frills', as its basic two–band EQ and switchable reverb attests, but it is solidly built and does its job very well. Many smaller acts will find four mic inputs perfectly adequate, while the mixer's stereo line inputs are ideal for connecting guitar preamps, keyboards or stereo backing tracks.

The mixer has no pre-fade sends, so you can't generate an independent monitor mix from it, and its mic inputs can't power capacitor mics or active DI boxes that need phantom power, but in the system's favour is its solid sound, its very compact format and its affordability. For stand mounting of the speakers you'd need to buy the optional adaptors, but other than that, this is perhaps the ideal system for a pub solo artist or duo, or for an acoustic act needing a bit of FOH reinforcement.

Class-D Amplifier: One in which the output transistors are operated, effectively, as switches, being either fully off or fully on, with the audio signal modulating (controlling) the switching action. Class D is very efficient, allowing smaller power supplies to be used. The 'D' is sometimes mistakenly said to stand for 'digital' when in fact it was simply the next letter in the alphabetical series after Class A, Class B (and A/B) and Class C.

Compression Driver: Specialised high-frequency loudspeaker with a small, domed diaphragm and usually attached to a directional horn. The narrow horn 'throat' constricts the volume of air into which the driver radiates, hence the 'compression' part of the name.

Crossover: A crossover is an electronic circuit designed to separate high– and low–frequency signals from each other so that each can be fed to speakers optimised for the role — ie. large and robust speakers for bass, small and light (and therefore fast) ones for high frequencies. If a crossover is placed between power amps and speakers (usually built into the speakers), it is said to be 'passive'. An 'active' crossover is used to divide signals before the power amps, so separate amps are then used for each band, further adding to efficiency. Crossovers can be two–way, just splitting highs and lows; three–way, adding a mid band; and occasionally four–way.

SPL (Sound Pressure Level): Sound level calculated in decibels compared to a reference sound pressure, commonly 20 micropascal (20 uPa), defined as the threshold of human hearing (0dB SPL). The human ear is capable of hearing an enormous range of sound pressures — the ratio of the sound pressure from the minimum up to damaging levels from even short–term exposure is more than a million — necessitating a logarithmic scale, which also corresponds roughly to our psychological perception of loudness.

Switch-Mode Power Supply: A high–efficiency power–supply design which allows the PSU to be smaller and lighter for a given capacity.

The Stagepas 300 is good value for small-venue sound reinforcement where there is no requirement to play back low-frequency material at high sound levels. I feel it's best suited to solo acts and duos working the pub circuit, although it can double as a rehearsal PA and a stage monitor system for larger bands. It's also well suited to basic conference work.