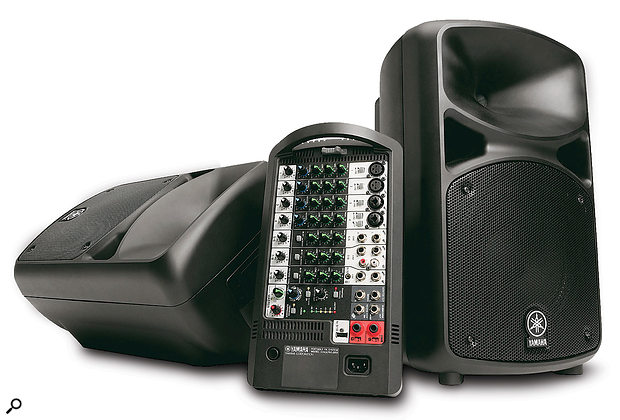 Yamaha's Stagepas is about as portable as a PA system can get — but how does it sound?

Yamaha's Stagepas systems have been consistently popular since their launch, because they strike the right balance between portability, sound quality and affordability. There are now two new models available, the 400i and 600i, of which the 600i is under review here.

The package comprises a pair of passive speakers and a powered eight-channel mixer, which can be stored in the back of one of the speakers. The other speaker has a removable rear panel, behind which you can store cables and other small accessories, such as a microphone or two. Catches hold the items securely in place for transit. The mixer has a flat base, so can be used on a table top, but where space is an issue, it is possible to use the system with the mixer still stowed: ventilation is via the front panel only, and is effective whether the mixer is docked with or undocked from the speaker.

The speakers house 10-inch LF drivers and 1.4-inch compression drivers, the latter feeding moulded HF horns designed to give a 90 degrees wide by 60 degrees vertical coverage angle. These speakers may also be used as floor monitors in a larger system, and the cabinets have an angled rear corner to allow floor positioning at an angle of 50 degrees.

StageLok sockets are fitted to the base of the moulded speaker cabinets, these locking securely onto standard poles in the 34.8mm to 35.2mm diameter range. Stands are not included with the system, though, so that's one extra you will need to buy. An optional mic stand mount is also available for the mixer. At 348 x 545 x 319mm, the cabinets are sensibly compact while still being large enough to work effectively.

Newly designed drivers enable these innocent-looking plastic cabinets to output up to 129dB SPL each, thanks to the 560W of continuous power available from the powered mixer. High-efficiency, switched-mode power supplies and the Class-D amplifiers built into the mixer help keep the weight down to only 25.4kg for the entire system.

The built-in mixer is an improvement on that used by earlier Stagepas systems. It has four mic/line channels (one of which can also be used as a high-impedance instrument input), plus three stereo line-only channels. Channels 1 and 2 have XLR connectors while channels 3 and 4 use 'combi' XLR/jack connectors. All the mono inputs have mic/line switches, with channel 4 having an extra switch to convert the line input to an instrument input. There's also a USB port designed to accept Apple iPods, iPads and iPhones and capable of charging the devices as they play.

The stereo inputs all have quarter-inch jack sockets, while the inputs on channels 5-6 are duplicated on RCA phono, and those on 7-8 are also available via a stereo mini jack. When the USB port is being used, the audio from the connected device is routed via channels 7-8. Stereo/mono switches are available for all three stereo channels, allowing either input to feed both sides of the PA when in mono mode. The mixer has no pan controls, so all the mic/line channels feed both speaker outputs equally. Phantom power is available only on the first two mic inputs, while all the channels have a three-band EQ (±15dB per band), where the mid-band frequency is fixed at 2.5kHz. 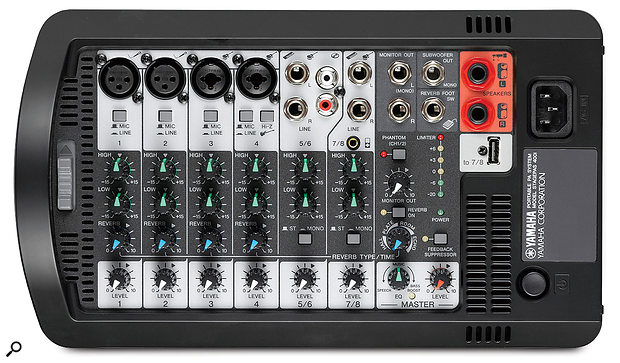 The included eight-input mixer provides power to the speakers, and includes an effects engine and anti-feedback filter.

A single-knob master EQ is provided, with markings for speech (far left), music (centre) and bass boost (far right). This optimises the speaker voicing for various tasks, and it essentially provides a little low cut at the speech end of the spectrum adding more lows the further it is turned clockwise. Where deep bass is needed, an optional sub can be fed from the system via its dedicated sub output connector.

Provided on the mixer are a selection of effects based on Yamaha's respected SPX algorithms. A single knob both selects and adjusts the effects, with the control being divided into four sections for Hall, Plate, Room and Echo. As the control is moved further up within its quadrant, the reverb decay time or delay time increases, then when you get to the next quadrant, you start again with the next effect. Effects send controls are available for channels 1-4 only, and all channels have rotary level controls. There's also a basic feedback suppressor built into the desk, which can be activated or bypassed as needed.

In the master section are left and right monitor output jacks (controlled via a single knob), a subwoofer output, and a footswitch jack for bypassing the effects. Note that the monitor out carries the same signal as the main mix — there's no option to set up a separate foldback mix. Two further jacks with red surrounds carry the power-amp output to the speakers (speaker jack cables are provided), and there's a separate master level control at the bottom of the panel. Basic LED metering shows the output level, with a red LED at the top to show when the internal limiter is being triggered. A latching power switch is located at the bottom right of the mixer panel, and there's fan cooling, which, although audible, is acceptably quiet.

I've used Stagepas systems before and have always been pleasantly surprised at how well they perform, given their price and convenience. The 600i is no exception: speech and vocals come over very cleanly, and that 2.5kHz mid-range control is ideally placed to freshen up a vocal that needs a bit more definition. The shelving EQ also sounds clean and workmanlike, while the SPX effects are extremely polished-sounding, although in most cases I found myself working right down at the shorter decay end of the reverb control scale. I had no problem with the delays, either, but a longer maximum delay time might be useful, as the current maximum seems to be around half a second or less.

Yamaha's anti-feedback system turns out to be extremely effective, with the automatic seek-and-destroy notch filters stepping in before the feedback builds up to painful levels. More importantly, the notches don't destroy the tone of your vocal, so they're clearly very narrow.

Switching to music via the iPod input, again the tonality is pretty well balanced. The low end isn't as solid as from a bigger system, but it's certainly fine for general music playback — and there is a cleaner mid-range here than on some larger systems I've used. For DJ use, adding a sub would make a lot of sense, but if you just need a bit of background music in the breaks, that shouldn't be necessary. There's always a hint of resonance from any small plastic-box system, but the harder plastic that Yamaha use here seems less susceptible in this respect than some other designs I've tested.

As to who such a system is for, that rather depends on what you intend to put through it. For vocals only, it will hold its own against a band with drums in a typical pub venue, and for solo performers or duos, there's bags of clean power on hand to handle vocals, acoustic guitars and keyboards, as long as you don't need a lot of deep bass. At higher volume settings the anti-feedback system is very welcome too.

Overall, then, and considering the modest cost of the Stagepas 600i system, there's ample power available for most small gigs, the effects are good, and you'd be hard pushed to find anything more portable or easier to set up.

Fender's Passport was the first of the truly portable and compact PA systems, but since then Yamaha seem to have carried the torch for the format and I've yet to find an alternative that performs as well for the price.

A practical and portable PA system for solo acts, duos or bands who need to amplify mainly vocals and/or non-bass instruments.