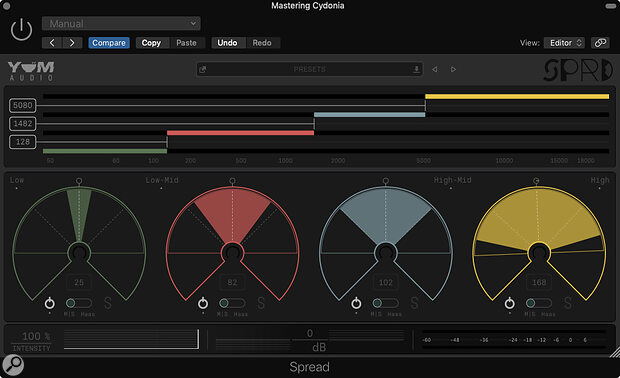 Yum Audio describe Spread, which supports Mac and Windows DAWs which can host AAX, VST2/3 or AU plug‑ins, as "an advanced Multiband Stereo Shaper". With user-adjustable crossover points, Spread splits the audio signal into four bands, each of which can be adjusted for stereo width and ‘tilt’, which can be thought of as a sort of stereo panning.

The GUI makes this all very simple, as pretty much everything is accomplished by clicking and dragging, and a clear display shows exactly what is going on. The crossover points are shown at the top of the screen, and the resulting bands are colour‑coded, with green, red, blue and yellow corresponding to the low, low‑mid, high‑mid and high bands, respectively. The circular displays below this are coloured in the same way, with a shaded area denoting the stereo width and the tilt position.

Dragging within the coloured area adjusts the stereo width, which can be set anywhere from mono to 200 percent, while dragging the small circle just above the wheel rim’s centre allows for tilting the image to the left or right. This open up some useful mastering options; for most of my mixes, I find that I want to narrow the bass end down so that it is almost mono, while widening the highs slightly, and Spread makes that really easy to do.

Other than those simple controls, each of the four bands offers a choice of two different stereo processing modes, an On button and a Solo button. Then, at the bottom left of the screen, you’ll find a slider that controls the intensity of the overall processing. In the centre section is an output gain slider, and to the right you’ll find output metering. The first of the modes uses Mid and Sides processing: changing the amplitude of the Sides signal relative to the mono Mid signal changes the stereo width. Increasing the Sides level above its original value produces an extra‑wide stereo soundstage, without changing the sound in mono (the Sides component, whether boosted or not, is cancelled out when the stereo signal is summed to mono).

While its effect is often very subtle, Spread is a really useful tool...

The width and tilt controls are designed to interact in a musical way. For example, if you have something tilted hard left but with a lot of width, you’ll still hear some sound from both speakers and it doesn’t collapse to mono at the panning extremes. However, if you bring the width down to zero, panning hard to one side or the other will result in the sound coming only from that side.

The second processing mode is Haas. You may recall that the Haas effect describes the way that our ears respond when they hear the same sound at the same level coming from the left and right sides, but with one sound arriving earlier than the other: as long as the delayed sound falls within a certain time window, the brain ignores the delay and perceives the sound as coming predominantly from the non‑delayed side. In this mode, you still have control over the stereo width, with settings over 100 percent still being possible.

Yum’s documentation advises you not to use extreme settings of the Haas mode on percussive sounds, since the added short delay may become audible on such material. However, it can work very well on smoother sounds, such as vocals, and adjusting the Intensity slider works rather like a wet/dry balance, allowing you to dial back the overall severity of the processing.

I liked Spread. Its GUI makes operation very intuitive and it sounds very transparent. While its effect is often very subtle, Spread is a really useful tool to have at hand when processing tracks and buses or when treating a whole stereo mix. That said, there’s plenty of scope for more creative applications too, not just corrective ones.