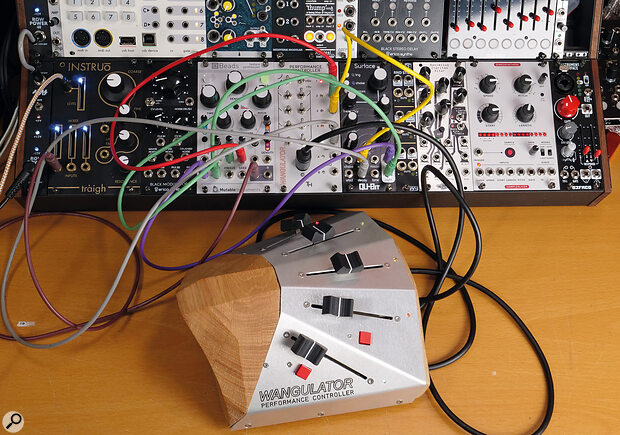 This is undoubtedly the weirdest hunk of wood and metal I’ve ever plonked next to my Eurorack. It’s a huge bear‑claw of a device that looks like it’s been hammered together in the forges of hell for the torture of people with small hands.

The Wangulator is imposing and extraordinary. It’s a performance controller for Eurorack that was designed by someone with a need to get all their fingers modulating different things all at once. It has a fader for each finger cut into the angular dome that fits the natural fall and spread of the fingers of a large hand. By clawing and spreading your fingers you move the faders and via a Eurorack module send voltages out into your modular.

I should point out that I have a pre‑production model and they’ve made a few adjustments for the production run. In particular the oak woodwork will fit better and it will be shrunk just a little bit to help with the ‘feel’.

It’s designed to be used with the left hand, although it doesn’t have to be, but that’s why the furthest left fader is shorter for the little finger. There’s also a couple of Trigger buttons next to the thumb and forefinger. The assumption is that you’ll be playing a keyboard or some such with your right hand. Perhaps if they did left‑ and right‑hand versions you could get two and sit in a huge chair with a Wangulator in either hand and wreak havoc with your modulations.

You connect the Wangulator to your Eurorack via a long thick cable to the 12HP control module. Each of the five channels gets a different‑coloured LED which also corresponds to LEDs on the Wangulator itself. When the fader is in motion the LEDs light up. You can switch between +‑5V, +10V or +5V and there are three response curves to choose from.

Once you get it, once you start modulating and undulating with your fingers it becomes an instrument of wangulating awesomeness.

It’s a brilliant idea and fun to use to the point of hilarious because it’s so wide and chunky. I haven’t seen any videos of it in use so maybe I’m not using it right, but I find that it’s not a natural fit for my hand. There’s no position where I can comfortably move all the faders their full length, especially if my palm is resting on what you would arguably call the palm rest. The full stretch of my little finger and thumb is actually quite unpleasant. However, if I keep my palm up off the wood and relax I can almost get the full play of the faders.

Once you get it, once you start modulating and undulating with your fingers it becomes an instrument of wangulating awesomeness. Look, I’m manually wangulating two filters and three LFOs and I’ve still got a hand free!

The Wangulator is fun, creative, useful and built like a tank. It would be brilliant in a hot and frenetic live performance situation where grabbing solid controls and dialling in many things with the flick of your fingers could change the way you approach your set. But it’s also a high‑precision instrument that can give you a way of standing back from your modular and play with ideas from an overview, without trying to find a knob in amongst the patch cables.

Inevitably the Wangulator is quite a funny device but don’t assume that it’s just for laughs — it’s a lot more engaging and enjoyable than that.