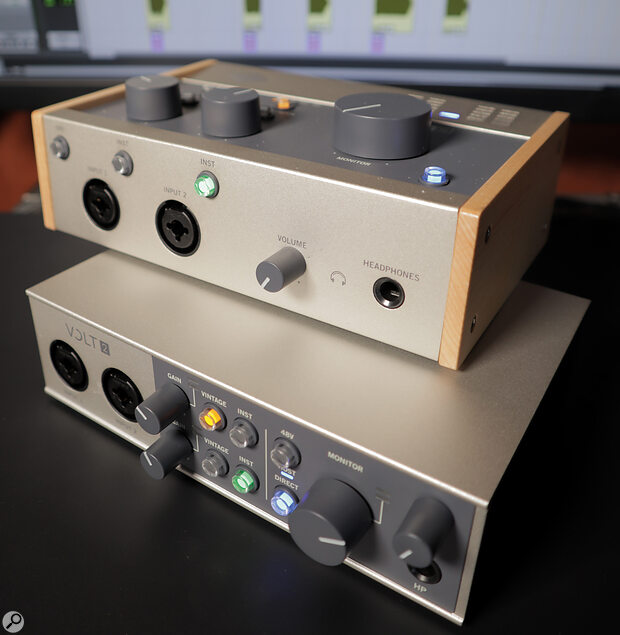 Universal Audio target newcomers to recording with a range of affordable USB interfaces.

The Universal Audio name has always been associated with innovation. The company’s original incarnation produced ground‑breaking valve consoles, equalisers and mic preamps, before going on to create the industry‑standard 1176 compressor. And in their rebirth under Bill Putnam Jr, the current Universal Audio company brought the idea of integrating DSP plug‑ins into native computer‑based systems into the mainstream. They then built on the success of the UAD‑2 Powered Plug‑ins platform to create the wildly successful Apollo range of audio interfaces.

Until now, this innovation has been targeted at industry professionals and the upper end of the home‑studio market, and UA have been content to let other manufacturers slug it out in the ‘affordable’ and ‘entry level’ price brackets. All that has changed, however, with the launch of the new Volt range of audio interfaces.

The Volt range marks a clean break with UA’s established approach in several ways. Firstly, these are interfaces designed purely and simply for recording; they have no DSP and cannot host plug‑ins. There is no equivalent to the Console utility that is paired with the Apollo interfaces, and indeed no software control at all over levels or routing. Although you need to install an ASIO driver on Windows, the Volt interfaces are otherwise entirely plug‑and‑play, with all features directly controlled from the hardware. And whereas the Apollo interfaces use UA’s Unison technology to offer sophisticated hybrid emulations of vintage mic preamps and other devices, the Volts have their own, purely analogue input‑conditioning options. Most of all, though, they’re extremely affordable!

There are no fewer than five Volts in the line‑up at launch, but unlike the Focusrite Scarlett range, say, where half a dozen models span a wide variety of input and output counts, all Volts are small interfaces designed for desktop use. Even the top‑of‑the‑range Volt 476 has only four inputs and outputs, and none of them has any digital I/O for expansion, so you won’t be tracking full bands live with any of them. All are designed to be bus‑powered through their Type‑C USB connectors, but as their power needs are relatively demanding, they come with an additional USB cable that can be connected to a phone charger or similar device if necessary. A (rather short) Type‑C to Type‑A cable is also supplied, but not one with two Type‑C connectors.

The Volts all share similar dimensions and look at first sight like half‑rack devices, but in fact are taller than 1U and narrower than half‑rack width. The most basic models are the Volt 1 and Volt 2, equipped with stereo line‑level outputs, MIDI I/O and a headphone jack, plus one and two combination jack/XLR inputs respectively. These are housed in fairly utilitarian grey metal cases, with all the controls on the front panel. The other three Volts, by contrast, feature smart wooden end panels and a form factor that places most of the controls on the top panel. The 176 and 276 have the same I/O complement as the Volt 1 and 2, while the 476 adds an extra pair of line inputs and outputs. The Volt 2 and 276 are also available as part of Studio Packs with a Volt‑branded mic and pair of headphones, providing everything you need to get started in computer recording (apart from the computer).

All of the Volts offer globally switched 48V phantom power along with a per‑channel setting called Vintage. This is said to be modelled on UA’s own 610 valve preamp, and introduces gentle saturation and a slight treble lift. Where the 76 models get their name, however, is in the addition of built‑in preset compressors on the input channels. These are likewise inspired by a classic UA product — in this case the immortal 1176 — and offer three switched settings labelled Voc, Gtr and Fast. All of this processing is implemented in the analogue domain, though of course there are no valves or transformers involved.

The Volt interfaces are all class‑compliant devices, meaning no driver is needed for use under Mac OS. I’m told that the Windows ASIO driver is a variant of the familiar Thesycon affair, which should offer adequate if not class‑leading performance. No control panel software is required because there’s nothing to control: as with many small interfaces, direct monitoring is handled in hardware. A button labelled Direct routes audio from both inputs directly into the monitor path at a fixed level. On Volts with more than one input, a single press pans inputs 1 and 2 hard left/right, while a second press pans both centrally. If you were recording a stereo keyboard you’d choose the former option, whereas the second approach would be more useful in situations where you’re recording two separate sources, such as vocal and guitar. The headphone output always carries the same signal as the main line outputs, so this choice of routing applies to both. I should mention also that all the Volt’s buttons contain LEDs which illuminate attractively when pressed, making settings such as phantom power crystal clear.

I was sent a Volt 2 and a Volt 276 for review, and having both side by side made it apparent that the latter’s layout has ergonomic as well as cosmetic benefits. There’s nothing wrong with the Volt 2’s front panel, but it’s definitely more convenient to have the controls on the top, and the extra space has allowed UA to fit five‑segment LED meters on the 76 where the 1 and 2 make do with two. The 76’s larger knobs also allow levels to be set more precisely, which is important for a couple of reasons. One is that, like many designs, the Volt preamp circuit exhibits some gain bunching, in this case around the central position. The other is that there’s no threshold parameter for the 76 compressor, so accurate adjustment of the gain control is needed to control the amount of compression you want.

Conceptually, the optional Vintage mode is similar to the Air option on Focusrite’s third‑generation Scarlett interfaces, or the 4K+ setting on the SSL 2 and 2+, and is likewise a simple on/off button with no further control. Engaging it doesn’t change the subjective level, but makes the sound both somewhat brighter and subjectively more ‘solid’. My measurements suggested that it adds a shelving boost with an extremely gentle slope, beginning around 1kHz and reaching +2dB at 10kHz or so, but I think saturation is probably a more significant part of the equation here than it is on the Scarletts and SSL. (That would certainly chime with my memory of the UA 610, which is a pretty hairy preamp.) It will need to be handled with care, but I think I prefer it to Air or 4K+, both of which tend to exaggerate the added brightness.

Engaging the compressor on the 76 models introduces a fixed additional boost of about 6dB, presumably as make‑up gain to compensate for the compression. In practice, though, I found it hard to achieve 6dB of gain reduction on most sources, and there’s definitely no way to get the extreme 1176 ‘all buttons in’ compression effect on room mics and so on. That’s not really a criticism, though. It’s always a good idea to err on the side of ‘too little’ when using compression during tracking, and the Voc and Gtr settings in particular offer gentle control rather than aggressive levelling. The latter is particularly useful on DI’d bass guitar. The action of the Fast setting is more obvious, and it will readily distort on anything with significant low‑frequency content, but unless you really crank up the gain control and risk clipping, you still won’t get more than a few dB of gain reduction. Incidentally, all three settings have an authentically 1176‑style fast attack time (under 2ms): for the most part, it’s the release time that varies.

In an interface targeted at new and inexperienced users, adopting the principle of ‘do no evil’ is very sensible.

On balance I think that UA have judged the implementation of this feature well. It adds a genuine USP that’s not available on any comparable interface, and for the most part, its effect is positive or at least benign. With only three preset settings, of course it won’t do everything you’d want a compressor to do, but in an interface targeted at new and inexperienced users, adopting the principle of ‘do no evil’ is very sensible.

In other respects, the Volts hold up admirably against their many competitors. The mic preamps have a gain range of 55dB (detailed specs were not available when we went to press), which is wide enough for most purposes, and are capable of capturing a very decent clean sound as well as vintage colour. With modern low‑impedance headphones, the headphone amp delivers a noticeably louder output than most bus‑powered interfaces, and although there’s no control over the level of the directly monitored signal, it’s easy enough to adjust the DAW output level to achieve a good balance when overdubbing. Left/right tracking is a bit awry at very low settings with both the main volume control and the headphone level control, but this is a common problem with stereo potentiometers, and there is no problem at any sort of real‑world level.

The Volt range is a late entry into a saturated market, but with Vintage mode and especially the 76 compressor, I think UA have done enough to make these interfaces stand out from the crowd. They’ve also pulled off the difficult trick of carving out a niche for them without undermining the more expensive Apollo range. Experienced engineers and musicians will appreciate the value of the Powered Plug‑in platform and the Unison concept, but there’s a learning curve involved in getting to grips with them, and the Volts should be perfect for anyone just getting into recording who wants a foolproof plug‑and‑play device for getting their vocals, guitars and other instruments into a DAW. You could even argue that UA have left a tempting gap in their range for something that offers additional I/O for people scaling up from a Volt, but who can’t quite stretch to an Apollo x8p. We’ll see…

Most affordable interfaces come with a pretty decent software bundle to sweeten the deal, but the Volt package is impressive by any standards. As well as Ableton’s Live Lite, you get amp modellers and other plug‑ins from Softube and Plugin Alliance/Brainworx, virtual drummer and bass instruments from UJAM, Relab’s excellent LX480 Essentials reverb, Celemony’s Melodyne Essential pitch‑processing software and the very popular Spitfire Audio LABS series of virtual instruments. All of this is accessed through a new ‘portal’ application called UA Connect, which is designed to make falling off a log look difficult, and succeeds.

What you don’t get, at least for the time being, is the opportunity to use Universal Audio’s own LUNA recording software. This is based around a ‘hybrid’ DSP/native approach to recording and monitoring, and thus requires an Apollo interface to supply the DSP side of this equation. It will be interesting to see whether UA choose to develop a native version to partner the Volt range.

Universal Audio have freshened up the market for entry‑level audio interfaces, spicing up otherwise conventional designs with analogue compression and preamp emulation.