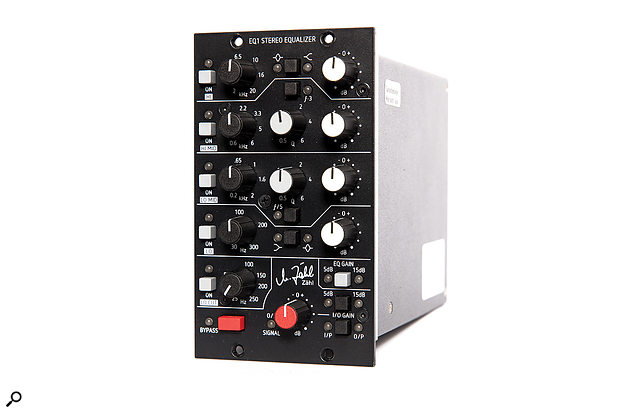 Zähl Audio’s consoles have long been cherished by professionals, and this unit should bring their sound to a wider audience.

Although Zähl, based in Bergisch Gladbach in Germany, have been around for a while — company mastermind Michael Zähl brings well over 35 years’ experience of designing and manufacturing pro-audio gear to the table — they’ve never really enjoyed mass-market appeal. That’s no accident, as Zähl deliberately focused on producing custom consoles for industry professionals of the highest calibre. For example, legendary producer, engineer and musician Conny Plank’s studio, near Cologne, was built around a custom-designed 56-channel Zähl console. One of the most important creative hubs in continental Europe at the time, Plank and his studio will forever be associated with a wide spectrum of Krautrock and early electronic music from the ’70s and ’80s. Michael Zähl also designed and built the mixing console for Can Studio, which today is on display at the Rock’n’Pop Museum in Gronau, Germany.

After these early successes, Zähl concentrated more on broadcast equipment. A few years ago, Mark Ernestus of Basic Channel and Rhythm & Sound fame (one of the most important figures of the early techno movement in Berlin) came across an old Zähl desk while searching for a new centrepiece for his studio. He contacted Michael Zähl about a number of maintenance issues. When it transpired that it would not be feasible to breathe new life into the old desk, the two instead set out to design a new mixer from the ground up. That project eventually gave birth to the AM1 console, which is Zähl’s current flagship model, a state-of-the-art analogue desk that’s built only to order but has already been installed in a number of big-name studios, including those of electronic music luminaries Ricardo Villalobos and Tobias Neumann.

The EQ1 may come in the more modest 500-series form factor, but the double-width module contains a full dual-channel EQ section from the AM1 console. The two channels are governed by a single set of controls, so while other applications are possible, the EQ1 seems destined for mix and subgroup processing; it’s one of the few true stereo 500-series equalisers currently available. Conceived as an almost fully parametric four-band EQ, the unit also boasts a few very unusual features normally only found in esoteric mastering processors.

The heart of the circuitry is formed by the two fully parametric mid bands, each equipped with pots for frequency, Q (0.5 to 6) and amplitude. The low-mid band offers corner frequencies from 0.2 to 2 kHz (the range can be switched to 40-400 Hz), while the higher band can be switched between 0.6-6 kHz, and 1.8-18 kHz — these overlapping bands can cover everything from the fundamental octave up to the air band! The two outer bands can be switched between bell and shelving curves, and again offer wide frequency ranges: 30-300 Hz for the bass, and 2-20 kHz for the highs. A low cut, fully adjustable between 25 and 250 Hz, completes the list of filters. A fantastic feature is that all filter bands can be individually switched on and off, allowing for both maximum sonic integrity and easy comparison. In addition, the module offers a global, relay-powered, hardwired bypass and a ‘master section’, which boast yet more unusual twists and turns.

I haven’t mentioned the amplitude range of the filter bands yet, and here’s why: at the flick of a switch, this parameter can be toggled between ±5 and ±15 dB. The first option offers a much finer resolution of the potentiometers for mastering use, the latter then releases all the power of the filter bands for more drastic treatments. In the centre position, the respective EQ band is automatically taken out of the signal path entirely, keeping the path as short as possible. 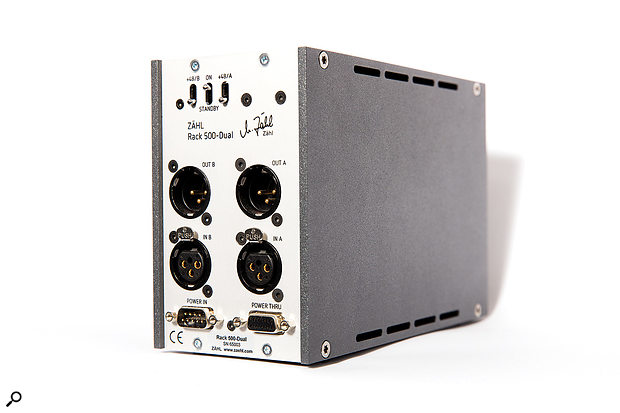 Zahl’s own 500-series chassis employs an external PSU to power up to two modules.Photo: Hannes Bieger

An adjustable gain stage can be used to compensate for level changes introduced by the EQ treatment. A novel feature, its gain range can be toggled between ±5 and ±15 dB too, and it can also be switched to the input and output stages of the processor. This way, headroom and noise floor can be optimally adjusted under all circumstances, regardless of the level of the signal fed into the unit. There’s also a level LED that lights green (signal present) or red (indicating a critical overload). While the indication is simple, the overload circuitry itself taps/monitors no fewer than 10 ‘checkpoints’ in the signal path. All level/amplitude pots offer centre detents, and every switch is illuminated by an LED: red for global bypass, green for the individual filter bypasses and orange for all other switches. In total, we’re looking at 12 pots and 13 switches on the faceplate, yet the design has been laid out so cleverly that you’ll neither need a manual to operate the EQ, nor feel that the EQ1 controls lack any form of visual guidance.

From the outside, then, this really is a prime example of everything German engineering stands for, and peeking inside the module gives me much the same impression. There are quality components on the two main circuit boards, including a vast array of premium WIMA capacitors, and everything looks neat, tidy and well manufactured. The module promises reliable performance for many years to come, and details such as the extremely quiet switches further add to this overall sense of technical excellence. 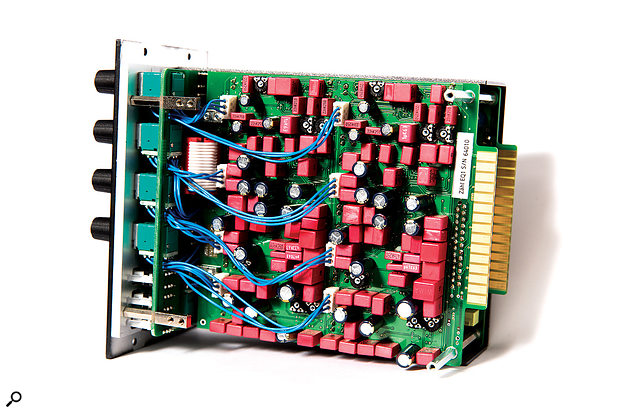 There are plenty of quality components in the filter section of the circuitry.Photo: Hannes Bieger

For anyone who’s not yet bought into the 500-series concept, Zähl offer a dual-slot 500-series chassis which can accommodate this module. An audio processor can only sound as good as the mains power fed to it allows, and this no-compromise design is for those who can afford it. It costs a hefty £649, but it has been manufactured to the highest standards, and boasts a very-high quality external PSU.

The EQ1 is so well designed, both electronically and visually, that while Zähl provide a manual with the EQ1 it’s rarely needed. The large number of LEDs, the colour-coded potentiometer knobs and the logical layout of the faceplate all combine to make it very intuitive to use. That said, it may take a bit of time to fully appreciate all the embellishments that have been added to the basic EQ circuitry, such as the fact that the overall gain control can be inserted both at the input and output of the module’s signal path. It’s such a small feature, and one that could easily be missed at first glance, but in practice it’s so neat and so useful that I wish it could be incorporated into all my other analogue EQs!

As several elements (eg. the individual bypass switches for the EQ bands, and the well-engineered power supply of Zähl’s lunchbox) suggest, the circuitry has been designed with transparency, clarity and versatility in mind. Such words are overused in this industry but after only a few moments’ use it becomes clear that Zähl have achieved their aim here, as the EQ1 doesn’t have a ‘personality’ in the way so many passive, low-cut filters and valve-driven devices do. The reason, of course, is that this is a true console EQ, and a good console EQ needs to handle whatever source you throw at it and still give you good results; the more distinct the character of a processor, the better it is suited for certain specific-uses, but the more limited the scope of tasks at which it will excel. 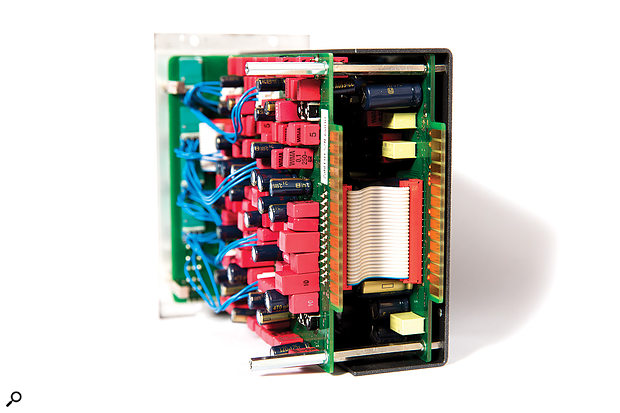 The module has been manufactured to the highest of standards.Photo: Hannes Bieger

In most situations, the results aren’t only good, but downright fantastic. A small, tubby-sounding bass drum needs to become bigger, bolder, more fundamental? Not a problem: even with a chunky 15dB boost at 50Hz the sound stays precise and contoured, and the kick drum gains a full, resounding bottom end. A lead vocal recording with a beautiful mid range but lacking some air? Again, no problem at all: the EQ1 offers plenty of air, too! The Zähl can ‘open up’ too-dark sounds nicely, and over a broad spectrum. The only caveat is that which applies to any clean, honest-sounding EQ — if there is any harshness in the source, an EQ boost will bring it out at some point. Still, I’d like to make clear that the EQ1 doesn’t do anything wrong here; it’s just a case of picking the right tool for the job at hand. And even then, it does a very good job up to the point beyond which certain specialised valve- and transformer-based circuitries can boast advantages, and a better one than most console-style EQs.

All these capabilities combine to make the EQ1 a great, powerful tool for mix-bus and subgroup treatment. These sources are typically quite complex and ask rather different questions of an EQ than most single sources do. The EQ1 offers plenty of headroom, courtesy of its wide-open active balanced input and output stages; any form of noise is simply a non-issue. The unit is dead-quiet under all circumstances and it does simple, minimalist retouching as well as bolder strokes with equal aplomb.

Summing up, then, the Zähl EQ1 offers a host of features, many of which are rather unusual outside the rarified context of mastering processors. It’s well-designed and beautifully manufactured, and as a true console EQ it just sounds ‘right’ across a very broad range of sources. There may be more characterful ‘sweetening’ EQs available for special applications, but the EQ1 is a peculiarly capable all-rounder that can sound ‘invisible’ when it needs to, yet bold and contoured when appropriate. When you consider that there are two channels involved here, then this is a great EQ for a fair price, and it deserves wide appreciation!

The Bettermaker 542, Elysia Xfilter and TK Audio TK-lizer 500 all offer dual-channel signal paths within the 500-series form factor, yet each delivers different design objectives. Within this format, units like the Great River Harrison 32EQ or the SSL 611 offer classic, versatile console channel-EQ layouts, yet they lack the special mastering-style features of the Zähl.

With every pass the EQ1 teases out more colours from the original recording. A more fundamental lower register, more authority in the mid range, and finally a little more clarity in the higher frequencies, are goals easily achieved with this EQ.

Vocals are among the most delicate of all sound sources when it comes to post processing. This example shows that the EQ1 can also deliver in this field. Again there is a beautiful mid range present in the original recording, but it lacks definition at the lower and higher ends of the spectrum. It must be noted that the EQ1 is capable of hefty high boosts, yet beyond a certain point it will bring out any harshness present in the original recording without mercy. However, up to this point, it offers great results as a vocal sweetener, too.

Perhaps the most drastic of these examples, the EQ1 helps to salvage this less-than-stellar recording of a kick drum. Originally a thin, weak signal with lots of mids, a full 15 dB boost near the fundamental frequency restores punch and bottom end on this signal. A rather narrow cut at 2.3kHz notches out an annoying click, and a shelving filter at 7kHz opens up the sound, adding definition.

The Zähl EQ1 offers two channels of the company’s flagship console EQ. It’s a true stereo unit, which means the faceplate can accommodate plentiful controls for its many special features. It offers very transparent, versatile sonics for a fair price.