In the quest for ever more elegant ways to integrate analogue gear with DAW software, Polish manufacturers Wes Audio are leading the pack...

The one obvious drawback with external hardware signal processing, in comparison with the in-the-box workflows to which we’ve all become accustomed, is the lack of session ‘recall’. Any DAW project can be loaded in seconds with all the plug-ins in the right channels with the precise settings, but once you start routing signals to outboard you also need to start taking notes (or photos) of the routing configurations and all the control settings, and spend the time manually resetting everything should the need arise to work on a project again. 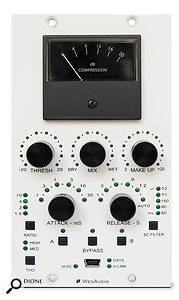 Thankfully, the last few years have seen the emergence of remote-controllable analogue gear, which can be used standalone or be configured (and often operated) from a dedicated DAW plug-in, thus providing the best of both worlds. One of the leading proponents of this approach is Wes Audio, a Polish company who have appeared often in the pages of SOS. I reviewed their Mimas FET compressor in SOS January 2016, an 1176-inspired design which was the first of their ‘ng500’ range. These 500-series modules can be controlled over USB from a bespoke plug-in using GCon interface technology. The second addition to the range is a stereo bus compressor with very obvious SSL-inspired design cues, and its associated remote-control plug-in is available in AAX, AU, VST2 and VST3 formats. I expect further modules will be announced before too long.

The Dione is a double-width, white-painted module with a moving-coil gain-reduction meter at the top, featuring the traditional white-on-black markings and spanning a 20dB range. Below the meter, five rotary encoders all have rings of LEDs to indicate current settings — white for the top three level-setting controls, and green for the time constants.

In the top-left position is a threshold knob marked with a ±20dBu range, although the manual claims ±15dB and the actual threshold range seems to vary with ratio selection. The centre-top position is held by a dry/wet mix knob, which allows simple parallel-compression effects to be established easily, while the gain make-up knob fills out the top-right position offering up to 20dB of gain.

Moving to the two lower controls, these adjust the attack time (0.1 to 30ms) and release time (0.1 to 1.2 seconds). The extreme clockwise position of the release control introduces a programme-dependent Auto time-constant mode, with a fast initial recovery which then switches to a slow release time for the final part of the gain reduction. The aim is to maintain the perception of a loud signal while avoiding obvious pumping effects.

The ratio is selected with a button which cycles between 1.5:1, 2:1, 4:1 or 10:1 settings, and a side-chain high-pass filter button is also available with 60, 90 or 150 Hz turn-over frequencies, as well as two ‘Tilt’ curves. The manual doesn’t give much away on the nature of these ‘Tilt’ responses, but they appear to alter the unit’s sensitivity to the mid range and HF, as well as the low end. So far so normal, but a decidedly unusual feature here is another button which introduces significant compression distortion, cycling between normal, medium, or high THD modes. With 4dB of gain reduction dialled in, I measured 0.19 percent THD in the normal mode, rising to 0.85 percent for the medium setting and 2.35 percent for the high setting (these figures align with the specifications’ claim of nominal THD amounts of one and three percent with zero gain reduction). The distortion is mostly the benign second harmonic, with the fourth becoming more evident in the high THD mode. It’s also worth noting that the overall gain through the unit is increased in the THD modes, with an extra 0.3dB on the medium setting and a significant 1.1dB on the high setting — as louder is always perceived as better, you need to be aware of this when making comparisons.

All of the hardware unit’s controls are touch-sensitive, and any setting changes can be captured and stored as automation in the DAW, if required. One of the key benefits of a digitally-controlled compressor like this is the ability to store different user settings internally, allowing them to be compared at the press of a button. In this case, a trio of buttons near the bottom of the front panel select local A or B memories, as well as a full relay bypass. The plug-in expands on this functionality with its own separate and unlimited presets, along with the ability to compare three settings.

The final front-panel facility is a mini-USB 2 port with a trio of status LEDs, one indicating a successful connection with a host computer (H-link), another showing data activity (Data), and the third (H-SC) indicating when the Host side-chain mode is active (see below). The Dione is fully compatible with all standard 500-series racks, and can be used in a stand-alone mode (without a USB connection) if required. In normal operation, though, it would be connected to a host DAW computer via the front-panel USB port — and not just for the remote control aspects, but also because it’s possible to send over the USB link a side-chain signal derived from inside the DAW, allowing a variety of side-chaining and ducking effects. However, some care is needed to avoid latency issues when working this way (or when using control automation), and the user manual advises that the control plug-in should be placed ahead of the side-chain audio send function in the DAW channel signal path.

For those that don’t like wires protruding from the front of their 500-series rack modules, Wes Audio have also made the USB control data available on secondary edge connectors at the rear of the module. This bespoke arrangement doesn’t affect use in a standard 500-series rack, but allows ng500 series modules to connect with a dedicated USB bus in Wes Audio’s own ‘Titan’ rack system, which went on sale as we were going to press. This incorporates an integrated USB interface capable of handling the data from any number of ng500 series USB-enabled modules, with a single rear-panel USB 2.0 or Ethernet connection to the host computer. 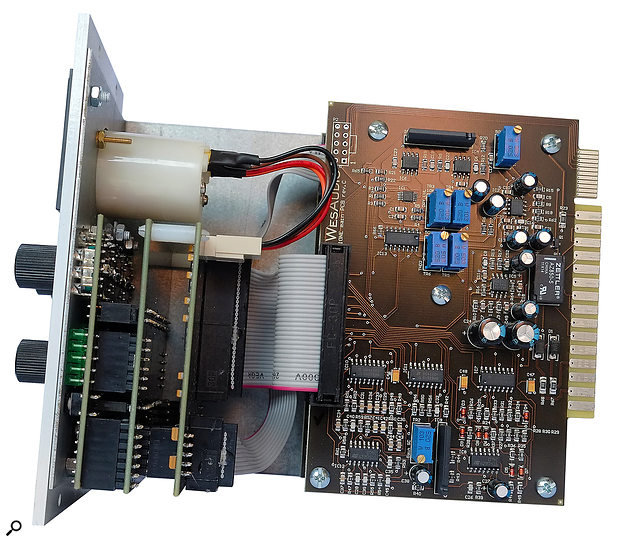 SMDs are used extensively in the design, alongside through-hole THAT Corporation VCA chips in both the audio and side-chain signal paths.

Looking at the Dione’s construction, two separate audio boards mounted towards the rear of the unit carry the 500-series edge connectors (and the extra USB interfacing). Most of the circuitry is constructed with surface-mount components, but with through-hole electrolytic capacitors, a couple of THAT 2181 Blackmer VCA chips on each board, and six multi-turn trimmers. The audio paths employ NE5534 and NE5532 op-amps, while the function switching is mostly handled by DG411 CMOS analogue switches (and a sealed relay for the bypass mode). Mounted directly behind the front panel is a stack of three small boards that take care of all the physical and remote digital-control data, connecting with the main audio boards through a couple of ribbon cables.

The software plug-in install and setup procedure is identical to that of the Mimas module I reviewed previously, and worked with similar aplomb. The various v2.1 installation files are contained in bundle packages on the Wes Audio web site for Windows (7 and later, 32- and 64-bit versions) and Mac (OS 10.8 and later), both with VST2, VST3, AAX and AU plug-in formats . I ran the VST plug-ins on a Windows 7 64-bit computer, and used them within Cockos Reaper and Adobe Audition projects without any issues. A firmware updater and USB driver are also included. Wes Audio officially support Pro Tools (v10.3.5 onwards), Cubase (v5 onwards), Nuendo (v4 onwards), Reaper 5, Studio One 3, Ableton 9 and Logic Pro 9, but all DAWs which support the plug-in formats listed above should be fine. Having said that, the web site acknowledges that, for some reason, the digital side-chain feature doesn’t currently work in Studio One 3 with the VST3 format, but does with the AU option. 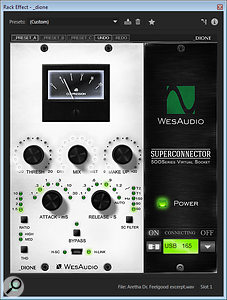 Control via the plug-in is intuitive, with the GUI being laid out just like the hardware unit.

The plug-in control interface is almost identical to the physical hardware, but the hardware memory A/B buttons are absent and there’s a side-wing showing the connection status. Tabs across the top of the GUI provide three comparison selectors (in addition to the familiar VST/AAX preset library functions), as well as undo/redo buttons which log the last 20 parameter changes (although the undo/redo memory is cleared if one of the A, B or C preset stores is recalled).

For the purposes of this review, I connected the Dione as a stereo bus compressor into an analogue insert of my Crookwood mastering console, and used it as I would any other compressor to gauge its audible performance, and I also ran my usual battery of bench tests using an Audio Precision test set (see later). The first unit I tested had a faulty control board which caused some rather odd over-limiting effects. Thankfully Wes Audio were aware of this issue — they thought all the offending units had been found and fixed but of course Murphy’s Law dictated that a defective unit should accidentally be sent to SOS! Having identified the fault I was sent a set of replacement control boards, which took seconds to install and everything then worked as expected.

The 1.5:1 and 2:1 ratios have very soft knees and appear to share the same low relative threshold, and so ease into compression very gently and subtly. The 4:1 ratio is also soft-kneed, but if the threshold control is not adjusted the effective threshold point is automatically raised about 15dB above that for the two gentlest ratios, which maintains a sensible output level and moderates the amount of gain reduction. Finally, the 10:1 limiter mode has a hard knee and the threshold is about 3dB higher still.

Checking the side-chain filter options, they provide some useful and precise control over the way in which bass-heavy or low-mid signals are prevented from forcing compression pumping — or not — while the tilt modes seem to make the compressor more sensitive to transients and act to reduce the perception of HF brashness or harshness from sources like cymbals or close-miked strings. If even this isn’t enough then, as I mentioned at the outset, you can route whatever source you want to the side-chain direct from your DAW.

Overall, this is a very competent variation on the popular SSL-style VCA compressor, and I found myself using it most as a traditional ‘glue’ compressor with relatively low ratios, low thresholds and modest amounts of gain reduction. The integration between classic analogue signal processing and full plug-in control works really, really well, too. As I said at the end of my Mimas compressor review, “someday, all new analogue hardware might work this way.” I still think Wes Audio are leading the field towards that very likely outcome.

There are several 500-series stereo compressors, including SSL’s own interpretation of their classic bus compressor, and several variations on that theme including the Dramastic Audio Obsidian, Serpent Audio SB4001, Alta Moda Audio Hippo, Smart Research C1LA, IGS Audio S-Type 500, and Elysia Audio Xpressor 500, to name just a few. But none of these boasts the integration with a DAW that the Dione does. 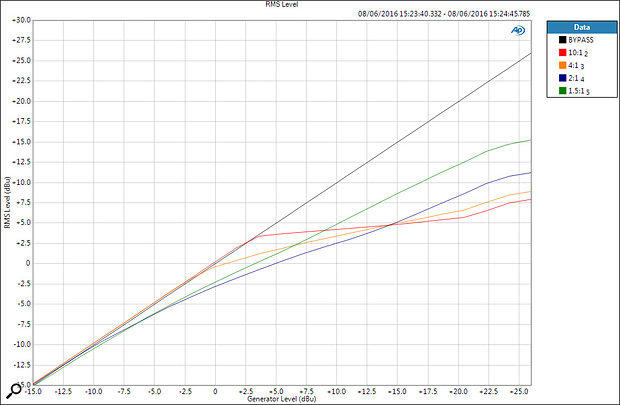 Some measurements captured during the review tests. This one shows the standard transfer plots of soft-knee compression slopes and hard-knee limiter with optimised relative thresholds. 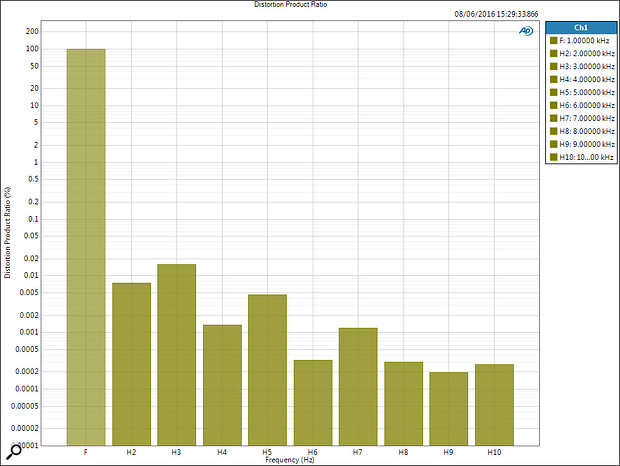 THD plots of the standard THD mode with 4dB of gain reduction applied. 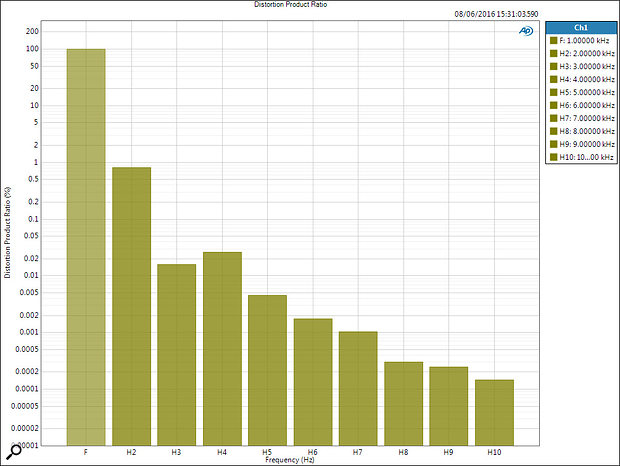 THD plot of the medium THD mode with 4dB of gain reduction applied. 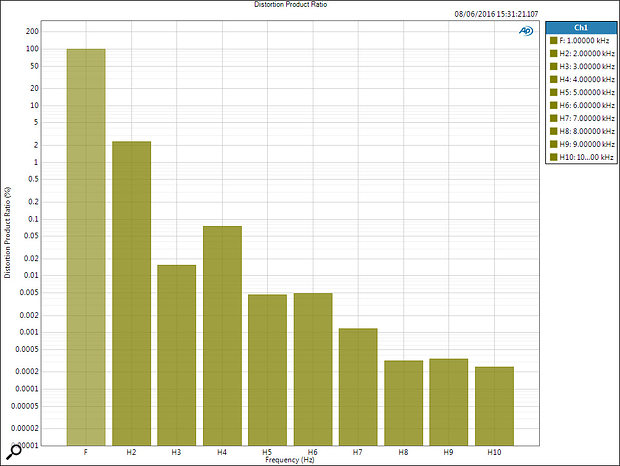 THD plot of the high THD mode with 4dB of gain reduction applied.

A well thought-out interpretation of the classic SSL bus compressor design that genuinely brings something new to the table.