VSL have been in existence since 2000, and in that time the company have created a stellar database of over two million samples, with more to come. One of the longer product evolutions has been the Vienna Choir, reviewed in SOS October 2010. Early last year the Viennese company supplemented the choir with a much-requested library of solo voices, which we’ll examine here along with other VSL releases.

Vienna Solo Voices (32.7GB installed) contains four female soloists (soprano, mezzo soprano, alto and an agile, high-pitched coloratura soprano) and three male — a tenor, baritone and bass. The singers’ ranges overlap to some extent, giving a lot of flexibility when it comes to assigning harmonies. All employ the intensely cultivated, pronounced vibrato associated with opera and classical singing, a radically different sound from pop vocals. As in Vienna Choir, the full library features the vowel sounds ‘aa’ and uu’ on all articulations, and adds the consonants ‘p’, ‘r’, ‘s’ and ‘t’ on the front of staccato notes. There are no ‘word-building’ facilities. I was slightly irritated at some vocalists’ inability to perform a simple open ‘aa’ vowel across their range, instead delivering a plummy ‘or’ sound which isn’t that different from their ‘uu’ articulation — I guess that’s classical singing for you! 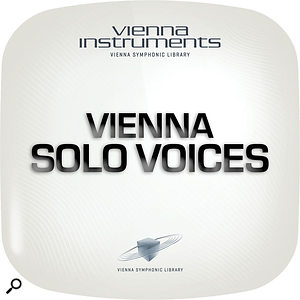 The seven soloists’ articulation menus are identical, offering sustain, staccato, sforzato, two lengths of crescendo and diminuendo, and breathing noises. All good workaday stuff, but as ever with VSL products, the library really comes to life in the four dynamic ‘performance legatos’, which feature wonderfully smooth (because they’re real) note transitions. These are particularly evocative in the alto’s and tenor’s quiet notes, a beautifully emotive articulation which would grace any melody line. I was also impressed with the accuracy and control of the spooky octave glissando slides. All in all, a perfect match for the Vienna Choir sections and a useful, expressive addition to the Vienna sound world.

Whistling has long been a quirky feature of film and TV theme tunes: think Ennio Morricone’s A Fistful Of Dollars, The X-Files theme and the irrationally jocular ‘Always Look On The Bright Side Of Life’. Now, with the help of the 1.3GB Vienna Whistler library, you can program your own catchy whistled tunes. The Vienna samplists treat their male whistle-blower as seriously as any solo instrument in their catalogue, providing a large menu of articulations performed with vibrato (a vital component of the irritating ‘tradesman’s whistle’) and without. Standouts include some lewdly insinuating up-and-down bends, true-legato portamento slides and fluting, owl-like falls.

Back in April 2011 I reviewed Vienna Dimension Brass, a collection of orchestral brass ensembles with a unique selling point: while each four-player section performed as a live ensemble, its players were individually miked and acoustically isolated to give total separation from the other three. Dimension Brass II (18.2GB) continues the concept, recording four trumpets in Bb, four trombones and four French horns with straight mutes attached, and adding a unique ensemble of four Wagner tubas. All sections play virtually identical articulations to those in the original library.

The Wagner tuba produces a richly vibrant, warm, horn-like tone with an extended high register, covering a wide timbral spectrum from mellow to blaring. Having four of them playing in unison with a dedicated microphone on each player is a unique facility. Other sections also shine: the muted trumpets’ and horns’ sharply incisive tones work well for dramatic interjections, while the muted trombones provide a more subtle tonal contrast. Though the musical possibilities are endless, I particularly enjoyed being able to ‘zoom in’ on each player in the trumpets’ 160bpm note repetitions to find my favourite performances. This is a deep, sophisticated library which requires the Vienna Instruments Pro player to access its full capabilities. Not one for beginners, but a great resource for serious orchestral practitioners. (See my SOS May 2013 review of Vienna Dimension Strings for more info on VI Pro.)

VSL now have two clarinets in Bb. That in itself may not guarantee a splash headline in The Sun, but it’s significant to some due to Clarinet Bb 2’s provision of multiphonics, a non-traditional style which produces two or more simultaneous pitches from the clarinet using overblowing and special fingerings. The resulting effects range from lovely, subtle harmonic overtones to the squealing atonal utterances beloved of the avant-garde fraternity and horror film composers. More well-balanced users will be pleased to note the new instrument also has a vibrato style and some great falls, which in my book makes it suitable for folk, jazz and pop.

All these titles were recorded close-up in VSL’s Silent Stage, a kind of reverse sonic black hole which repels external noise. (The recording acoustic is fairly dry, so you’ll probably want to add reverb.) The libraries require a hardware USB Vienna key, and Vienna Instruments player software is included. The solo voices and clarinet are available in a choice of standard and full libraries, the latter offering extra articulations: both versions are installed when you buy the standard library, after which you can pay extra to unlock the full version.