This is a companion volume to the Dark Skies: Cinematic Ambiences collection that was reviewed in the May 2010 edition of SOS. Like its predecessor, Deep Impact packs a pretty sizeable punch: over 4GB of sample data spread across nearly 600 individual samples, all presented in a stereo, 44.1kHz, 24‑bit format. Also like its predecessor, the emphasis is very much on soundscapes and textures, so this is more sound‑design territory than material for conventional music production. 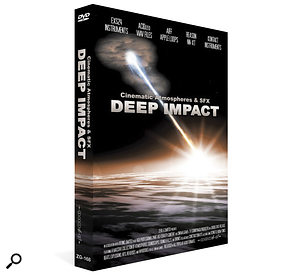 The core of the library (at about 2.5GB) is approximately 150 samples organised into 40 construction kits. Given the nature of the material, these are somewhat different to the kinds of construction kits you might find in a music‑based sample library. Each kit contains a small number (generally two or three) of long atmosphere‑style samples. Each of these is generally over 30 seconds in length and many are at least a minute long. The contents tend to be slowly evolving textures, ambiences or drones and, given the length of the samples and the fact that there are usually two or more samples that can be layered, it is possible to create some quite extended soundscapes without any of the sense of repetition that can occur with shorter loops. The moods are suitably disturbing and the content is more likely to appeal to sound designers or composers working on grown‑up horror, action or sci‑fi rather than those tackling Disney's latest child‑friendly animation or a romantic comedy. The material is predominately textures and atmospheres: aside from a small number of the kits (for example, 'No Way Back' or 'Run Fast'), there is little by way of rhythmic elements. All the construction kits are named, but I suspect there is a certain amount of dark humour going on here. I can't imagine anything less birthday‑like than the deeply disturbing 'Birthday' cue!

The rest of the content includes a rather eclectic mixture of drum beats, drones, a collection of ambient sound effects from various locations (almost like someone has set up a mic and recorded the background noise in places such as cellars, airports, corridors and tunnels) and reversed sounds. However, the highlights of this section are the explosions, hits and whooshes. So wind your monitors up and be prepared to be knocked off your chair; these are generally big and bold.

I might quibble with the library title a little as, to me, 'Deep Impact' implies an emphasis on big things being hit. While there is some of that (and very good it is, too), the greater proportion of the material falls into the 'cinematic ambiences' category. Although there is nothing particularly revolutionary about the type of content provided here, the quality is excellent and these sounds would certainly not be out of place in big‑budget film and TV projects. John Walden