The original was a diamond in the rough — so is PolyKB II a highly polished gem? 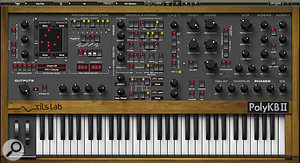 in October 2010's SOS, I reviewed the original PolyKB soft synth from XILS Lab in France. This modelled analogue instrument was intended to recreate the rare, early '80s PolyKobol, created by French company RSF, and I complimented its sound and versatility, but also noted some bugs and unfinished ideas. Now here we are, less than a year later, and the company have released PolyKB II, which claims to address many of the points I raised, as well as enhancing numerous features and adding new ones. The excellent oscillators and filter have survived unmolested, but much of the rest of PolyKB has been improved, including the modulation matrices, X/Y and spatial modulators, arpeggiator, sequencer, the effects section, and the user interface. If you didn't see the original review, by the way, my comments will make more sense if you read it first, at /sos/oct10/articles/xils-lab-polykb.htm 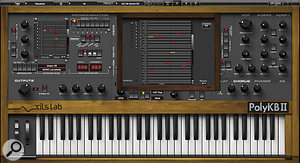 Let's start with the GUI. That of the original PolyKB was dim and overshadowed in places, so I'm delighted to report that the PolyKB II interface is a big step forward. Although it contains more controls and more options than before, everything is brighter and clearer. There are three display options, the smallest of which will be particularly good for users with older, lo‑res monitors. On my Mac, Digital Performer 7.22 displays all three correctly, but only the largest is displayed in Plogue Bidule, so you might want to check that all is well on your system before purchase.

Moving on, let's turn to the Modulations section in the centre of the panel. If you look at the switches here, you'll see that red/green 'LED' pairs have replaced the single on/off indicators of PolyKB. Press a button once to link a source to a destination and the red light comes on; the source is now connected with negative polarity. Press it again, the green light comes on and it's connected with positive polarity. While I would have reversed the order (positive first and then negative) I'm not going to criticise, because this answers one of my major concerns regarding the original PolyKB: that velocity sensitivity could only be applied positively, so, for example, a higher velocity meant that, while your filter cutoff frequency went up, your contour times were extended and the response slowed down.

If you look even more closely at the Modulations panel, you'll also see a small icon above the velocity VCA button. This is shown as either [+] or [x] and allows you to determine whether the MIDI velocity is added to, or used as a multiplier for, the VCA value. I like this. Other improvements in this section include a couple of additional modulation destinations, plus the mono‑mod LFOs promised when PolyKB first appeared.

The most creative enhancements to the modulation facilities lie in the 'Programmation' section that houses the X/Y modulation, spatial modulation, sequencer and arpeggiator. In my original review, I commented that it would be great if the voice positions in the X/Y modulation page (now called PolyMYX) could themselves be the destinations of other modulators, and that they needed to be bipolar (a position one side or the other of an axis could increase the value of one parameter while decreasing the value of another). Well... the bad news is that the positions are still not destinations; the good is that they are now bipolar, as are the positions in the renamed DynaMYX spatial modulation window.

There are two new, spatial modulation modes in DynaMYX: Aquarium and Magnet. When the first of these is chosen, the voices swim around in the 'room', while the second causes them to respond as if they are all attracted to or repelled from one another. You can control the amount and speed of movement in either mode, as well as the degree of phase shift that occurs as the voices move about in the virtual space. However, the propagation delays, reverberation and pitch shifting that would occur in a real space are not calculated, no doubt because to do so for multiple voices in real time would require significantly more computing power than even the fastest CPUs can yet provide.

The arpeggiator has had its bugs ironed out and has been enhanced, boasting its own programming window. This adds the option to choose an octave range, a poly mode, swing, chord arpeggiation and more. It's now a powerful system with many more creative possibilities than before. Likewise, the sequencer has been enhanced with improved controls and a larger display that appears in the centre of the GUI if you click on the magnifying-glass icon. You can use the arpeggiator and sequencer together to create some fascinating, complex patterns, but you'll have to work at this to create useful results, or be lucky enough to stumble across something musically meaningful.

Finally, PolyKB II boasts two new effects: a phaser and a parametric EQ. I'm delighted that the first of these has been added, although, to be fair, it doesn't emulate the deep swish of vintage stomp boxes. Nonetheless, it's very flexible and you can enhance its effect greatly using the two‑band (low/high) EQ, which is also a welcome addition.

PolyKB II feels more polished than its predecessor. Numerous niggles have been corrected, and serious imperfections such as the omission in the key tracking (which previously affected only the Attack stages of the envelopes) have been corrected, making it a much better synth than before.

Of course, it's not perfect, and I'm mildly disappointed by the lack of a unison detune knob, and concerned by an occasional propensity for inserting small glitches at the starts or ends of notes, especially when the system is stressed by the use of unison and the X/Y effects pages. There are also small graphical anomalies when the larger sequencer window is displayed. But notwithstanding this, it has become a very fine soft-synth, warm and engaging, and it simply sounds nicer than most of its competitors.

Another bonus is the fact that PolyKB II is a free upgrade for existing users and can be run using the same licence as the earlier version. What's more, it will load and use PolyKB patches, although there will, of course, be small differences, particularly in the area of modulation. Interestingly, if you have installed PolyKB II as an upgrade, you can run both versions simultaneously, as well as the forthcoming PolyKB II Player (see box). This means that you can retain the use of your PolyKB patches without any changes, while reaping the benefits of PolyKB II. One of the major pitfalls of upgrading — "sure, it's better overall, but I've lost such‑and‑such, which is a real pain...” — is not an issue. Bravo!

At the end of my PolyKB review I wrote that, "once the bugs have been zapped and all the features are finished, I expect it [PolyKB] to be one of my favourite soft synths”. Well... the bugs have been zapped and the features are finished, so if you're thinking of buying a soft synth that emulates a vintage polysynth, I strongly recommend that you evaluate PolyKB II.

XILS Lab have released two libraries of sounds to complement PolyKB II. Bag 1 ($23) concentrates on exotic pads and effects, and provides an interesting opportunity for users to see how things can do things to other things within PolyKB II. Bag 2 ($28) offers more patches and a wider palette of slightly more conservative, and therefore more immediately useful, sounds. If you're looking for something to get you started or are stuck in a bit of a rut, these may be worth trying.

XILS Lab have pre‑announced a patch player for people who want to access the sounds of PolyKB II but don't want to programme it in depth. It was still in development while this review was being written. Based on the PolyKB II synth engine (and therefore not available as a stand‑alone player), it will retain the arpeggiator and effects, and allow users to control up to eight automatable parameters per patch. The player will be supplied with the PolyKB II's factory sounds and will also import XILS Lab's sound sets, including the recently released Sound Bags. Its projected price is $35, and an upgrade path from the Player to PolyKB II is promised.

I liked PolyKB very much. I like PolyKB II even more. If you're looking for a soft synth that emulates a vintage analogue synth but goes a step (or three) further, try the free demo version. I'll be very surprised if you don't like it too.