I wasn’t quite sure what to expect on seeing the ‘Desert Tracks’ title for the first time but, if you were thinking Ry Cooder and Paris, Texas, then think again; Zero-G are aiming at something that is much more about the musical heritage of a Middle Eastern/North African desert than the American Southwest. This is, of course, quite a niche musical style for your average computer-based media composer. However, if you are seeking some material to give your next score a genuine flavour of the music from countries such as Egypt, Morocco, Tunisia, Turkey or Iran, then this may well be a relatively inexpensive place to start. 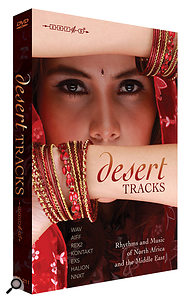 I checked out the contents via the Kontakt-mapped patches where the 750 24-bit/44.1kHz audio files are spread across around 90 ‘instruments’. In total, there is approximately 1.7GB of sample data. Whichever format you choose to use, the samples are organised into the same structure. There are six region-based folders — Arabian, Egyptian, Persian, Turkish/Greek, Mahgreb and Comptemorary — plus two additional folders: Melodic Solo and Percussion Solo. Within the region-based folders you get two further sub-folders. One of these contains a collection of drum/percussion loops while the other contains ‘themes’, with a handful of these in most regions but as many as 15 in the Contemporary folder. Each theme is essentially five or more, pre-mixed, complete loops, each with some musical arrangement or melodic variation. The drum and percussion loops are very characterful but, for the quickest of results, you could, therefore, simply trigger the loops from one of these themes in some sort of sequence.

The Solo folders also contain loops. In the Percussion Solo folder these cover instruments such as the darbuka, doholia, rig and sagat but also include some hand-claps and frame drums loops. The Melodic Solo section includes accordion, kanoun, ney, oud and oriental string loops. These all capture the character of the region but, of course, you do have to work within the relatively modest range of melodic phrases provided.

I’m certainly not an expert in the music of the Middle East/North Africa but, to my relatively untrained ears, Zero-G do seem to have captured a convincing slice of the area’s sound in Desert Tracks. You might, of course, find one of the melodic loops that exactly fits your musical needs but, for me, it would be the various percussive elements that would be the most useful. As with any regional musical genre, if you get the rhythms right, then you can capture the essence of the sound, even if you then hybridise it with more contemporary (Western) musical elements. And, at this price, if the library allows you to do just that, then it has probably done its job. Desert Tracks might not be the most extensive or melodically flexible of libraries but, for that touch of Eastern promise with a minimum of fuss, it could be just the thing.