The Channel Settings Panel gives you an expended view of the control set for a single channel in your project.

Cubase’s Channel Settings Panel lets you see what’s going on under the hood of the Mix Console.

Cubase’s Mix Console offers access to more parameters than most DAWs’ mixers, but sometimes you’ll need to focus in more detail on an individual channel’s settings — and that’s the Channel Settings Panel’s raison d’être. Whether it’s an instrument, audio, group, effect or MIDI channel, a quick click on the ‘E’ (edit) button in the Mix Console or the Project window’s Inspector pane brings up the Channel Setting Panel. Some of its facilities are obvious, but several useful or unusual features lurk beneath the surface.

You can configure exactly what’s on display in the Channel Settings Panel via its Window Layout dialogue box (located top-left). By default, you see a control and navigation strip at the top, three tabbed sub-panels and a fader strip (far right). The top strip allows you to specify channel input sources, channel name, channel output destinations, and to load channel presets. This strip also includes options for moving to the next/previous channel, and also to the ‘last edited’ or ‘next edited’ channel. The latter pair are useful if you need to move frequently between a small number of channels that are located in very different parts of the Mix Console layout. It would be nice if all these ‘channel switch’ options could be assigned to a key command but, at present, I don’t believe that’s possible. 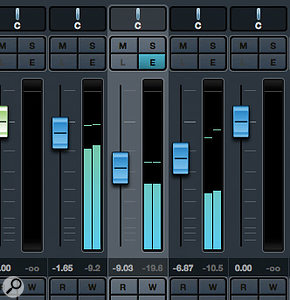 You can access the Channel Setting Panel for a given channel from the Mix Console (as shown here) or from the Project window’s Inspector panel.

From left to right, the three sub-panes provide access to the channel’s insert slots or built-in channel strip signal chain, channel strip or EQ controls, and effects sends or cue sends settings, respectively. Tabs at the top allow you to move between the alternative views in each pane. There are further tabs at the base of some panes, too. For instance, the Inserts pane can show either the selected plug-ins or the audio routing for all slots; and the Sends pane can be toggled to show the send destinations or the L-R pan settings for the send slots.

The Inserts Routing options allow you to determine how audio is passed through any mono or stereo insert plug-ins you deploy on surround-sound channels. The Sends Panning tab will be more useful to most of us, though. For example, if your audio track is panned hard left, you might choose to pan a send to a stereo reverb hard left, to keep the sound in the same location, or to opposite-pan the send, to create a sense of stereo width from a mono source. If you want to link the send pans to the main channel pan automatically, enable the Link Panners option for that channel from the drop-down menu next to the Track Preset selection box in the top strip.

For those with a more ambitious studio setup, who wish to create different cue mixes when recording multiple musicians, the Cue Sends pane is invaluable, as it allows you fine-tune the level sent from the selected channel to each musician — you can send more drums to the bass player, or more of a pitched instrument to a singer to assist with their pitching, and so on. (This all requires that you’ve first configured physical outputs for the cue sends, via the VST Connections window and Control Room).

The Channel Settings Panel also allows you to see the various channel strip components in more detail than can be seen in the Mix Console, and in the Strip sub-panel you can drag-and-drop to reorder the processing tools (to use the EQ pre- or post-compression). You can also toggle the processing position pre or post the insert slots, using the small arrow at the top of the Strip pad. This is really useful if you want to add a third-party processor after you’ve already made tweaks to the in-built EQ — unfortunately, you can’t drag inserts in between different elements of the strip, though. Presets for each strip processor can be accessed here, and you can easily switch between the multiple options of any processors which offer them (for example, the Maximizer’s choice between maximizing and limiting).

The Channel Strip sub-panel layout automatically adjusts to reflect any signal chain changes you have made in the Strip sub-panel. Unless you’re working with a very high horizontal zoom level in the Mix Console, the Panel offers a much nicer view of all the channel strip controls.

The Equalizer sub-panel gives you a live spectrum view while adjusting your EQ settings and, as you can expand the horizontal size of the Channel Settings Panel, you can get as much visual detail as you need.

By default, the Equalizer pane provides a much larger spectrum view than that available in the Mix Console. For more surgical EQ adjustments this visual feedback can be extremely helpful; the spectrum display in particular becomes more useful. But there are actually three views available, and you can toggle between these via the (very) small green button at the top right of the pane. You can choose to see sliders or knobs, or to remove the virtual controls altogether, leaving a larger spectrum view. As you can stretch the horizontal size of the Channel Settings Panel, you can super-size the Equalizer’s spectrum display for an even more detailed view. 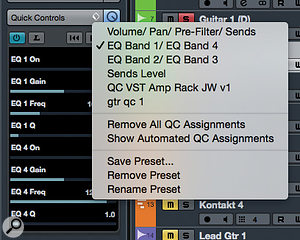 The Channel Settings Panel can show you (far right) just how your audio is eventually being routed to the main outputs — in this case, via a reverb send and a parallel processing bus.

This ‘spectrum-only’ view makes a lot of sense if you also map an external hardware controller, with a set of rotary knobs, to control the EQ of the currently selected channel. The simplest way to do this, even if your controller has a modest number of knobs, is via the Quick Controls (QC) system, and Steinberg have helpfully included some QC presets. As the QC system only gives you control over eight parameters at a time and there are four bands of EQ, you have to strike a compromise — the supplied QC EQ presets do so by giving you full control over two of the four EQ bands. An alternative approach, which I’ve set up myself, is to map the eight QCs to the gain and frequency controls for all four bands. This lets me sweep frequencies, cutting or boosting to find the areas I want to work in, while giving me clear visual feedback via the spectrum display. I then move between the onscreen controls to adjust the Q (bandwidth) settings and my hardware Quick Controls to fine-tune things.

Once you’ve created a QC preset for the Channel Strip EQ, it can be added to any track in an instant via the Project window’s Inspector. But as EQ is so fundamentally important in the mix phase of a project, I’ve set up project templates with this QC preset pre-loaded on all audio and group tracks.

However you approach this, if the QC system is configured to control your EQ, as you switch between different channels in the Channel Settings Panel, your external hardware controller will automatically give you hands-on EQ control for the currently selected track. Of course, if you happen to have an external controller with more than eight knobs, you can use Cubase’s Remote Control options to give you more comprehensive hands-on control of the Channel Settings Panel. Check out Matt Houghton’s January 2015 workshop for more on this (http://sosm.ag/stripitgood).

One last feature in the Channel Settings Panel is worth a quick mention: the ‘Show Outputs Chain’ facility. This is toggled on/off via the double-headed arrow icon in the top strip. When on, the Channel Settings panel expands to the right and displays, for the currently selected channel, all the channels that the audio subsequently passes through before reaching the main stereo output. If you like to keep your mixes simple (every channel is directly routed to the main stereo output) this won’t tell you much you didn’t already know, but if you use lots of Group Channels and sends to FX Tracks, this is both a very handy way to check how the currently selected channel’s audio is eventually getting (or not getting!) to your main output, and a useful means of navigating to those subsequent channels in a large mix.