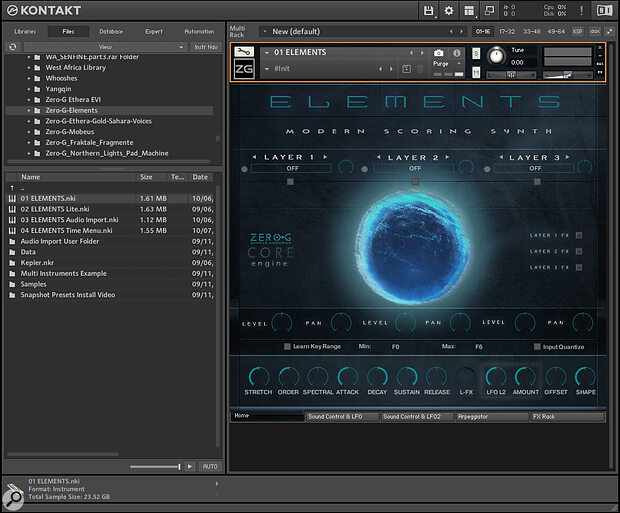 Zero G’s Elements is aimed at those working on creating contemporary soundtracks and sound design, but in reality it would also fit into many musical genres. Many of the samples used in this three‑layer instrument were created by recording organic sources, acoustic instruments and particular environments, which include wind, rain and water, though there are also some synth‑like sounds. The full version of Kontakt v6.6.1 or later is required.

Elements is described as a Wavetable Hybrid Synth and comes with a Wave ROM of over 23GB, the presets divided into categories for easy access. The instruments include a raw‑sounding old English Cello, Classical Guitar, Electric Guitar, Felt Piano, Hardware Modular Synths, Viking Horns, Mallet Instruments, Metal objects, ethnic percussion, drum loops and so on.

On opening Kontakt you’ll find normal and Lite versions as well as a version that allows audio samples to be imported into the third layer via drag and drop. I found that the normal version really hammered the CPU on my 12‑core, 2012 Mac Pro, sometimes pushing it over the edge, even with a 256 buffer size (one of the more powerful i‑series processors is recommended), but the Lite version behaved perfectly with no apparent loss in sound quality. However, I did find that just a few of the samples didn’t play at all in the Lite version. The manual informs that the Lite version has a less CPU‑intensive engine, uses less memory and drops some features, but I don’t think anybody would feel short‑changed if they had to use it.

Some of the 500 or so factory sounds are playable as conventional instruments while others include note transitions, usually fairly simple ones. Others include velocity switching, plus lots of examples arranged as arpeggios or pulses, with the tempo‑sync’ed sounds optimised for use in the 75 to 110 bpm range. The native Indian flutes are particularly evocative, as are the classical guitars, and the vintage cellos are fabulous, but there’s so much to explore here, including some unusual choral sounds. The library really is huge, based on over 8500 individual samples.

While Elements may not provide everything you need to tackle any scoring situation, if you already have some good orchestral sounds then you should be able to find something here that works. The breadth of sounds on offer is impressive, so your only challenge is to find time to explore them all.

Your Questions Answered
6 days 10 hours ago.