Zero‑G's Epica is undoubtedly a labour or love by producer Sam Spacey. The library has been nearly three years in the making, and focuses on bringing the warmth and character of some classic synths into a virtual instrument environment presented using Kontakt. With over 17,000 individual, hand‑edited/looped samples, all presented in 24‑bit, there is a lot of work here, which amounts to nearly 13GB of sample data.

The original sound sources include synths like the Arp Odyssey MkIII, Yamaha CS15 and CS30, Roland DX7 and D50 and Matrix 6R, amongst others, all captured through some high‑end analogue hardware. The resulting 600 presets are organised into nine categories: Pads, Bright, Soft, Bass, Mono, Plucked, Sci‑FX, Effected and Sequence. Epica isn't, however, just a preset machine; you also get a dedicated control interface within Kontakt. The front panel looks fairly 'retro' but has plenty of options for tweaking the supplied sounds. However, dig into the further panels — all of which have a more contemporary feel — and you are presented with a huge set of possibilities. The 'virtual sound module' description is an accurate one. 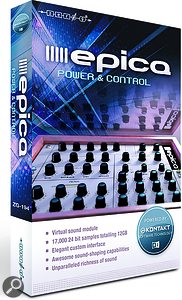 Sam Spacey has stated that the original inspiration for Epica was to provide a library for epic film scores and, in auditioning the sounds, it soon becomes very clear that that particular box is well and truly ticked. However, while this is perhaps the most obvious role for Epica, if you need a collection of classic synth sounds to use within a more song‑based production environment, it can do that also; there are plenty of sounds here that would work brilliantly within a modern synth‑based dance track.

Of course, almost every computer‑based musician on the planet probably has a virtual synth collection that, in principle, can emulate the kinds of sounds that the classic synths listed above originally created. Why should anyone need to add Epica to that sonic toolkit? I must admit, this was the question I asked myself as I waited for that huge download to complete. However, once installed and activated, it didn't take me too long to find the answer: Epica sounds, well, epic. Having used — and loved — many software synths over rather too many years of doing all this stuff, I have to say that I was genuinely impressed by the quality of sounds on offer here. And what really struck me was how genuinely warm and full and, where appropriate, analogue-sounding so many of the presets are. Examples might be the beautiful 'ahh' of the 'Angelic Pad' or the undeniable depth and warmth of the 'Analog Sequence' or 'Squelch' sequence presets (although there are dozens more I could have picked); these are some of the most convincing 'analogue' sounds I've heard from a desktop virtual instrument.

I hope Sam and Zero‑G see a good return on all the hard work that has gone into producing this library. To repeat, Epica sounds epic and, at this price, composers and electronic music producers ought to find plenty to tempt them. Highly recommended.