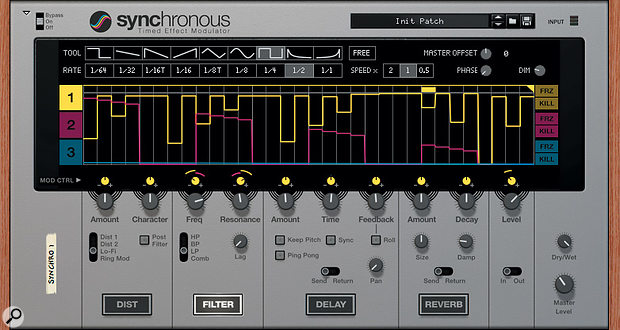 Synchronous is a rhythmic multi-effects processor which, until the end of June, is completely free to download.

We look at what's new in Reason 7.1 and check out the Synchronous Rack Extension.

After a typically brief, energetic beta-test period, Reason 7.1 has been released. It's free for users of 7.0, and $129€129 for owners of previous versions. It's not a milestone release, but it offers many small enhancements alongside some very interesting new features.

The Rack Extension format, introduced in Reason 6.5, has been enthusiastically embraced by many third-party developers, with the result that we have ever-more superb instruments and effects to play with! But from developers' points of view the first version of the Software Development Kit (SDK) that Propellerhead supplied was, apparently, not without its frustrations and limitations.

Version 2, introduced alongside Reason 7.1, aims to improve that. Of course, an SDK isn't something that most of us will experience first hand, but we can already enjoy the sort of thing it makes possible with Propellerheads' new Synchronous Rack Extension, which we'll look at in more depth in a moment. Synchronous (see below) demonstrates the potential for sophisticated new data display and user interfaces with its big multi-layered waveform area on which you can click and drag to your heart's content. No longer are developers limited to knobs, sliders, switches, menus and simple value displays.

Another aspect of the SDK V2 that should start filtering through in the coming months is potentially a much bigger deal. Huge, in fact. A 'scriptable Instrument Development Toolkit' promises to allow sample library and soundware developers to build dedicated sample-based instruments for Reason that will be available to buy in the Propellerhead online shop. They'll download, install and authorise in the same way as Rack Extensions currently do. Will these new instruments still be called Rack Extensions, or something else? No-one knows yet, and details overall are currently pretty scant. But there are several really important points here.

First, that word 'scriptable'. It's scripting that allows for the most complex sample-based instruments, of the type supported by the likes of NI's Kontakt, MOTU's MachFive and many self-contained virtual instruments. Multiple articulations, emulations of traditional instrument playing techniques, sophisticated playback gizmos — all sorts of things should be possible, consigning the limitations of NNXT to history in a single stroke. Second, the kit offers developers ways to work without getting mired in computer coding. In fact, Propellerhead have specifically mentioned they've built in support to allow existing content to be ported to the new format; not just from former NNXT products, but from Kontakt too. Amazing! It is at least conceivable that some of the most exciting soundware products currently out there — by SonicCouture, Spitfire Audio, Heavyocity, Best Service and others — could one day be available in Reason. Lastly, for us end-users, working with these new 'encapsulated' instruments should be easy and fun; they're likely to have specialised, streamlined graphical interfaces that'll let you get results fast.

We'll be coming back to this in the coming months, no doubt...

Most other Reason 7.1 changes are quite subtle, but they're all a step in the right direction. 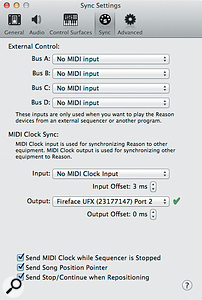 A few new items have appeared in Reason's Preferences window. Hardware synth users and conspiracy theorists will have plenty to go on.In the Preferences window there's a Sync page with more sophisticated MIDI options, including separate input and output choosers, timing offsets, and options relating to transport and song position. With the resurgence of interest in hardware synths, drum machines and sequencers this could be a big deal for some users. In the Advanced tab you'll find a tickbox that allows Propellerhead to gather, or not, error reports and your usage statistics. While it's stressed that no musical content is ever transmitted through this mechanism, and it can be beneficial in support queries, you'd better untick it if it seems a bit too Big Brother.

On the Master Section device there's now a Spectrum EQ button. Shift-dragging devices in the rack conveniently disassociates them from any existing device group and places them as if you'd created them from new. You can now use the Razor tool on audio clips you've 'opened' (such that their slices are visible). And self-contained REX files can now have their slices used as samples. You can import 32-bit float WAVs, and there are any number of smaller bug fixes.

Synchronous (shown above) is Propellerhead's latest Rack Extension offering, and as I mentioned elsewhere this month its colourful 'waveform' display showcases one of the features of the new Rack Extension SDK. It also happens to be free until the end of June (although you'll need to have updated to Reason 7.1 to run it) so get over to your user account at shop.propellerheads.se and download it quick! The asking price from July onwards isn't currently known, incidentally.

Propellerhead call Synchronous a 'timed effect modulator'. It consists of three sophisticated step sequencers plus distortion, a filter, delay, reverb and simple level control in a single box. The shapes you make with the sequencers can then, predictably, control the effects' parameters. It's brilliant for rhythmic effect treatments like ducking, filter sweeps and patterns, glitchy distortion and lo-fi splinters, selective delays and strange gated-like reverbs, some of which we'll have a look at in a moment. And while much of that may have already been possible courtesy of the Matrix Pattern Sequencer in conjunction with other effects devices and a bit of rear-panel CV patching, Synchronous makes it a hell of a lot easier. It can create much more sophisticated modulation shapes too — smooth curves and ramps as well as steps — and apply them in different amounts to some or all effects parameters at once.

Let's start by looking at that display. The three modulation curves are layered on top of each other, and you click on the yellow 1, magenta 2 and cyan 3 at the left to select which one you want to work with. The little DIM knob at top-right controls how visible other layers are.

To draw shapes, select a drawing tool then click and drag in the display. For Matrix Sequencer-like step changes choose the first 'Stepped Line' tool and the Free option. Switch to the next tool along, 'Linear Line', if you want the same kind of shape but without the abrupt changes. Turning off Free lets you drag much longer ramps, spanning multiple steps. By the way, you're not bound to use all 32 steps in the display; drag the little triangle-shaped flags to shorten or lengthen the sequence.

All the other tools, which look like LFO waveforms, draw regular or 'periodic' shapes. When you select one an extra row of Rate buttons appears beneath the tool selection to control the duration of each shape. It works just like quantisation values, so 1/4 equates to a quarter note (crotchet), 1/16 to 16th notes (semi-quavers) and so on.

To actually apply some modulation look to the row of small knobs at the bottom of the display area. They appear in different colours depending on which modulation curve — 1, 2 or 3 — is selected. You'll notice too that the row is labelled MOD CTRL (modulation control) on the left.

So let's say we want a simple, pulsing, level-ducking effect. Create an instance of Synchronous for a device in your rack then right-click an empty part of its panel and choose Reset Device. That cleans the slate, so to speak. With shape 1 (yellow) selected, choose the Stepped Line tool and the Free option, and start dragging and clicking in a shape of your choice. Then turn the little modulation knob in the Level section. It'll go either way: to the right to 'add' your shape to the current level, and to the left to subtract it. In this instance, with the way I've drawn my shape (shown in the main screenshot), a left turn, applying modulation negatively, gets me what I need. And to compensate for any overall loss in level I can simply turn up the main, grey, 'static' level knob.

A single shape like this can control any number of parameters. So you might enable the filter (by clicking the big FILTER button), set the static Frequency and Resonance knobs to taste, and then dial in some modulation there too. However, single parameters can be modulated with more than one shape simultaneously. Try selecting shape 2 and (like I have) draw in a falling ramp with the square wave tool, and a long-ish rate (like 1/2). That can be applied to the filter parameters as well. You'll notice little coloured arcs surrounding the modulation knobs to indicate the current assignments.

And that is about all you need to know to pull off some outstandingly complex and exciting modulated effects treatments with Synchronous. There are more niceties of course. Each shape can be set to run at normal, double or half speed (equating to a step length of a 1/16, 1/32 and 1/8 note respectively). The Master Offset knob advances the playback position of all shapes up to 32 steps, so you can explore (amongst other things) what your shape sounds like shifted relative to the musical material it's treating. And play around with the FRZ (freeze) and KILL buttons. KILL is like a 'mute' for the modulation shape — it temporarily removes the modulation but keeps your effects in place. FRZ stops the step sequencer at the current step, and another click returns playback to normal again.