A Touch Of Logic

Play Logic from your iPad with Touch Instruments.

With Logic Remote's Touch Instruments for keyboards, drum pads, guitar and bass, you are now able to play Logic's software instruments directly from your iPad. Combined with touch-screen access to the Smart Controls and the chord strips, there are some really powerful performance features within the Touch Instruments, including the Smart Strings made famous in GarageBand for iPad. Developing keyboard chops and performance styles could soon take on a whole new meaning for Logic, MainStage 3 and GarageBand users.

Firstly, let's set up your iPad to avoid accidentally opening Control Centre or switching apps. Open Settings, then under General, switch off Multitasking Gestures. Also under Control Center, turn off Access Within Apps.

Logic Remote will only open if you're on the same Wi‑Fi network as the computer running Logic. Another option is to connect via Bluetooth. Either way, Logic has to be up and running since Logic Remote is a controller for it. Open Logic Remote on iPad, and connect to the Mac running Logic.

To choose a Touch Instrument, tap the View button in the upper left of the control bar on Logic Remote (it looks like five rectangles), tap 'Smart Controls & Keyboards', then select the Keyboard, Fretboard or Drum Pads at the bottom of the View menu. If you select 'Automatic', the Touch Instrument follows the patch loaded to the selected software instrument. For instance, a piano patch loads the Keyboard and a guitar patch loads the Fretboard. You could also, of course, choose to play strings or guitar from the Drum Pads or drums and guitar from the Keyboard Touch Instruments by not using Automatic mode. 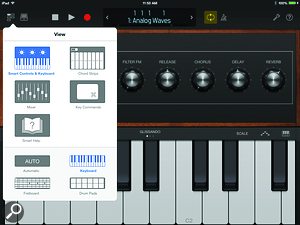 Go to the View menu to select a Touch Instrument.

This workshop is focusing on the Touch Instruments, not all navigation possible with Logic Remote, but here are a few basics:

Here are a few basic performance features in Keyboard mode. Swiping left or right across the keys by default creates a glissando, smoothly gliding between note pitches. Swipe left on the word 'Glissando' to select Scroll mode. In this mode, swiping on the keys will adjust the visible keyboard range. The third option, Pitch, gives you the ability to perform pitch bends on the keyboard.

You can also hold notes with the Sustain control or drag the control to the right to lock it. To switch octave, use the arrows on the left. What's also great is that you can play in a particular scale. To do this, tap 'Scale' then select the scale you want to use. Change the note the scale starts on by changing the Logic project key in the Global Tracks in Logic on your Mac.

Tap the Library button at the top of the screen and start exploring for sounds. Logic Remote's Library lets you view patches just as you would on your computer, mirroring Logic's library. To see the library full‑screen, drag down the icon at the bottom-centre of the Library view. Swipe back up to see the keyboard and try sounds out. 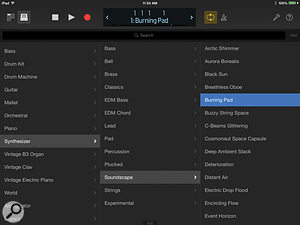 The Arpeggiator control, the stepped triangle‑shaped icon to the immediate right of the Scale control, activates the Arpeggiator MIDI plug‑in. In this mode, the Sustain control becomes a 'Latch' control. Holding it will keep the Arpeggiator playing after you have stopped holding the keys down. Swipe it to the right to lock it, then play a chord. Tapping a different musical key will then transpose it to start on the tapped note. You can hit the Latch control again to stop the arpeggio. If arpeggio settings such as Note Order and Octave Range are assigned as Smart Controls in Logic you can adjust these within Logic Remote too.

Create a new instrument with the Vintage Electric Piano / Deluxe Modern patch. Access the Chord Strips view from the View menu, and tap one of the five upper segments to play chords in different inversions. This behaviour is also especially useful with any of the strings in the Orchestral category and with guitar patches. If you are familiar with GarageBand for iPad, you'll see a lot of similarities. The lower three segments are the bass notes. By default, these are the root, fifth and octave. To play chords and bass together, tap them at the same time.

Here are the steps to assign your own chords to chord strips:

For some easy creative fun, select a string patch, go to the 'Smart Controls & Keyboard' view. Then tap the scale you want to use and enable Sustain. Try the Japanese scale, which is particularly obvious and beautiful; you can't play a wrong note! Now return to the Keyboard view and play a few notes switching between the performance types of legato, staccato, pizzicato and tremolo.

Smart Strings are possibly the smartest and most revolutionary use of the iPad as an instrument controller. This only works with the patch called, appropriately, Smart Strings. Find this patch in the Library under Orchestral / Strings.

From the View Menu, select Automatic then Chord Strips. Now you have control of a five‑voice string section: first violin, second violin, viola, cello and double bass. You have the same chord inversions of your selected key found with other patches — but with special techniques for playing and controlling the dynamics: 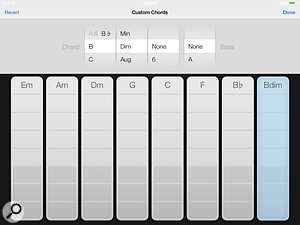 Customising your Chord Strips from the Settings menu.With the Drums Touch Instrument you can play a drum kit by tapping the on-screen drums. Load a drum patch from the Library, then tap the View button and select 'Smart Controls & Drum Pads'. The drum sound is based on the patch loaded to the software instrument track. Use the smart controls in the top half of your iPad view to make adjustments to the basic mix of the drum sounds — the levels of each drum voice, a few common effects, and (on patches that use Ultrabeat) to enable the Sequencer. Tap the Library button, then tap the Drum Kit category for acoustic kits, or the Drum Machines category for an electronic kit. For a full‑screen view of the pads, select Drum Pads from the View menu, or Kits, if an acoustic Drum Kit patch is selected.

With two or more fingers you can play a repeating pattern. Try it with the Closed Hat. By changing the distance between your fingers, you make the repeats faster or slower. Moving your finger up or down makes the hits louder or softer. Experiment using one or two hands. This trick almost makes up for the challenge of programming drums without velocity sensitivity! 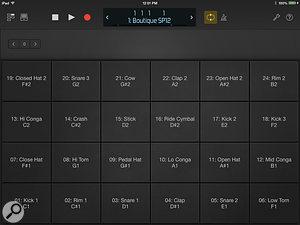 The full‑screen Drum Pads view. For acoustic drum patches, this is represented with a drum kit.

Although I'm not a guitar player, the Fretboard Touch Instrument allows me to very easily compose and experiment with guitar parts. From the Library, select the Classic Clean patch under the Guitar category. Next, in the View menu, tap Smart Controls, then Fretboard. Tap a string to play individual notes, tap multiple strings to play chords or drag on a string to bend notes.

With the Scale selected on my Touch Instrument and key signature selected in Logic, I like to think of this as being in the 'No Wrong Note' mode. Maybe select the Minor Blues scale. The Fretboard also shows lighter‑coloured note bars for the root notes of your selected key.

Switch to Chord Strip view for a very cool performance experience. To strum a full chord quickly, tap the top of a Chord Strip. Alternatively, strum the chord more slowly by swiping straight up or down the strip. If you set the key of your project to a particular key in Logic's Signature Track, say F minor, the Chord Strips play only diatonic chords in that key.

Select a Bass instrument, like a fretless bass, and the Touch Instrument will switch to a bass with only four strings visible if 'Automatic' view is selected.

Use Touch Instruments on the iPad to explore new and extraordinary ways of controlling your performance and playing software instruments in Logic.