With a title like Heavy Industry, it will perhaps come as no surprise if Zero-G’s latest offering is intended to take the user into the sonic realms of the urban, industrialised world. The library provides a collection of 300+ 24-bit WAV/AIFF audio files and a total of just over 1GB of sample content. As well as the raw audio files, Kontakt, EX24, Halion and NNXT presets are provided. I tried the Kontakt presets and each of these was essentially an individual WAV file mapped across the full keyboard but without any library-specific front-end; if you want to build more complex presets combining the individual samples, then that’s a job for the keener DIY sampler enthusiast. 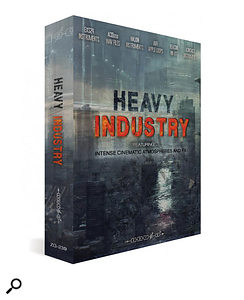 Sonically, we are most certainly in cinematic soundscape territory here. The samples are divided into a number of groups and these include collections of Alarming Noises, Atmospheres, Drones, FX and Short FX. The Atmospheres and Drones form the real heart of the library and these are pretty much what you would expect. For example, the 70 Atmosphere samples all run to over 20 seconds and provide some really nice soundscape-style beds. For a shortish cue these could easily be used on their own, but blend/layer three or four together and it is fairly easy to create a more extended piece with plenty of variation. The 60 drone samples, while more varied in length (both shorter and longer), can be used in exactly the same fashion. In both groups, the moods are exactly what you would expect and, if you wanted to create some cues to drop straight into a dystopian, Blade Runner 2049 world, these would do the trick. The occasional sample from the Alarming Noises or FX folders can be used to add suitable ear candy to ‘hit’ some on-screen events or cuts.

There is also a folder of kick and hi-hat drum loops plus some individual kick samples and, while these are perfectly good in their own right, given the nature of the rest of the content, this does feel like a rather unusual inclusion. I think I’d rather have had more of the soundscape content and, when required, used a dedicated drum loop library if I wanted to blend in some more rhythmic elements. That said, adding things like kick or hi-hat elements into drone or soundscape-based cues can be a very effective way to add urgency.

I’ve absolutely no complaints about the nature of the main sample set included here. They are very characterful and of high quality. And, given the fairly modest price, there is a respectable amount of content. However, with plenty of choices when it comes to sound sources for cinematic soundscapes, and in particular from libraries that provide the user with a dedicated front-end that makes blending the sample content almost child’s play, Heavy Industry is perhaps up against some stiff competition. The sounds themselves are great... just be prepared for some hands-on work to fully exploit them.