Some of London's top session players were present at the recording of The London Sessions, which took place at Soho's Dean Street Studio. To create the library's 1700 24-bit samples, the production team recorded 16 instrumental tracks, each of which was cut into loopable sections and bound together to form a construction kit. The promo notes state that the kits cover a wide range of styles, including soul, lounge, rock and funk, but the mention of Mark Ronson and Amy Winehouse in quick succession reveals the kind of material that purchasers can expect to find. 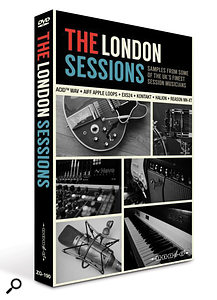 The most pleasing samples of all are the drum riffs, almost all of which have a very natural room sound, a compelling groove and not too many hard-to-place elaborations. Admittedly, the drummer seems overly keen on certain grooves, but the loops have a lot of character, which is what every sample user is after. The other core instruments are nothing if not conventional fodder for modern productions, although the playing is unwaveringly tight and energetic. Most tracks are built around at least one electric guitar, bass, Hammond organ and piano. Strings, brass and woodwind ensembles are used frequently, and various synth sounds back up bass lines and flesh out melodies.

Although the reverberant sound of the recording studio is the only coloration affecting some of the samples, others have been printed with delays and effects. This is understandable when a guitar amp is recorded and the mic captures the whole effects chain, but it is slightly surprising to hear trumpet solos and brass hits with delay. Assuming these effects were added after recording, it would have been good to have the pre-treatment dry samples too.

Retro-sounding analogue warmth is provided by a tremolo vibraphone, ping-pong Rhodes, funky Clavinet, electric piano, and a Hammond organ played with expert use of its Leslie speaker, drawbars and effects. Lalo Schifrin's Dirty Harry score came to mind when I was soloing some of these particular samples, although the kit compositions are much more modern. There are also a few aural surprises to be found within the construction kits. Of particular interest are a very sweet-sounding music box that crops up in more than one kit, Mellotron strings, a slide guitar, harp and celeste.

What is most appealing about The London Sessions, though, is the liveliness of the performances. There is a sort of no-nonsense approach to the whole thing, which adds character to the sounds and makes them all the more useable. The library certainly isn't a one-stop-shop for samples, but as a source of inspiration, it does a good job. Tom Flint