Apple are forging ahead to a 64-bit future and are not looking back. Where does that leave your 32-bit plug-ins that are yet to catch up?

The recent release of Logic Pro X brought into focus once again Apple's bold approach to backwards compatibility and legacy support — which is to say that there often isn't very much of it! Aside from the fact that Logic Pro X requires OS 10.8.4, which could see many users needing to update their OS or even buy a newer Mac, it's strictly a 64-bit application, and only supports 64-bit Audio Units plug-ins.

Just to recap, 64-bit software can address much more RAM than 32-bit software. In a DAW, that's of great benefit to big sample-based virtual instruments, which can load far more sample data into RAM, and complex, memory-hungry plug-ins such as Melodyne. 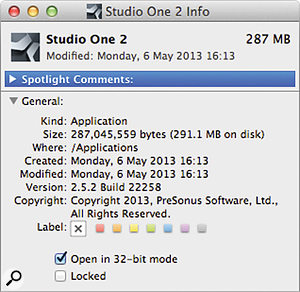 Most DAWs still allow users to choose whether to work in 32- or 64-bit mode — but for how much longer?

So if 64-bit is so much better, what's the problem? Well, 32-bit plug-ins — which were the norm until quite recently — won't even be seen by a 64-bit DAW like Logic Pro X. For you to have continued access to your full complement of third-party instruments and effects, they'll need to have been updated to 64-bit compatible versions, and some developers just haven't got round to updating all their plug-ins yet, even quite major players like Audioease and IK Multimedia. Others have, but rolled in new features at the same time and made them paid updates. That's the case with some of GForce Software's excellent synths and Antares' processors.

Of course, users of most modern DAWs, other than Logic Pro X (and Pro Tools 11), usually still have the choice to work at 32-bit (with the memory addressing restriction) or 64-bit (and face many of the same compatibility issues). Cubase users, to some extent, get the best of both worlds, by using its VST Bridge. That's similar in nature to the one that used to be provided with Logic 9, and can bring 32-bit plug-ins into the 64-bit application environment, albeit with the same memory restrictions that they always had. In fact, bridging is an option open to any DAW that supports VST plug-ins, courtesy of the third-party utility jBridgeM (currently €9.90$13.09 from jstuff.wordpress.com/jbridgem). This can generate new wrapped versions of your 32-bit VSTs that will work (quite successfully, often) in a 64-bit DAW. At the very least, it can be a temporary solution for specific plug-in incompatibilities as the whole DAW sector lurches towards a 64-bit future.

But with no bridge currently available for Audio Unit plug-ins, what, if anything, can Logic Pro X early adopters do to work around the restrictions and breathe a bit more life into their 32-bit plug-in favourites? In the case of virtual instruments, you can use a dedicated host application running alongside Logic.

The $79.99 Rax 3 from www.audiofile-engineering.com will host your 32-bit synth plug-ins and let you drive them from your MIDI tracks via dedicated inter-application virtual MIDI buses. Getting the audio back into Logic is tricky, though; you may have to use some kind of hardware 'loopback' on your audio interface. Also, generally, the application itself doesn't look to have been updated for some time, though it works fine in Mountain Lion.

A little more costly, the £77.35$118.74 Plogue Bidule (www.plogue.com) has a marginally steeper learning curve but is well worth the effort. It's under active development (with Logic Pro X very much in mind), and is a superb instrument host, amongst many other things. Again, you can drive it via virtual MIDI, but it can also output audio directly into your Logic mix, via inter-application Rewire and an aux channel. 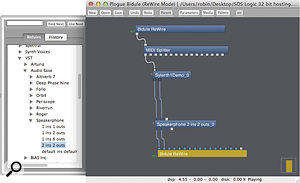 A more costly host application ­— the €235$309.87 Vienna Ensemble Pro 5 (www.vsl.co.at) — offers impressive cross-platform and distributed processing options, and comes with a nice orchestral sample library to boot. It could be overkill for individual instruments, but it really is the Daimler-Benz of the hosting world.

As for 32-bit effects plug-ins, the situation isn't rosy. There's a rather desperate possibility of generating 64-bit versions of 32-bit VST plug-ins using jBridgeM, and then hosting them in Bidule, running as an Audio Unit plug-in. But this path is riddled with uncertainty and instability, and you definitely shouldn't expect or bother to seek any support. It'd be better to use your energy looking for 64-bit-ready plug-in alternatives.