The trusty Scream 4 has been with us for many years now, but is still an excellent ‘character’ effect. Like all others of this type, it’s best used directly connected to a rack device, in an insert configuration, rather than connected to one of the mixer’s aux sends.

Reason has plenty of tricks up its sleeve for adding character and warmth to a mix.

If you’ve already upgraded to version 7 of Reason, you will no doubt have been enjoying its new bundled effect device, Audiomatic Retro Transformer. This orange wonder is remarkably easy to use — just choose your effect flavour, tweak it with the Transform knob, and adjust levels if necessary — but it can imbue tracks with real character and vibe.

However, there are other approaches to adding character and dirtying up your sounds in general, and you won’t necessarily need the absolutely latest version of Reason to achieve many of them. All have the ability to give drum loops, synth riffs, audio tracks, whole mixes (or anything else, really) a notably looser and more lived-in feel. They can help to banish unwanted vestiges of squeaky-clean digital accuracy, and provide a really interesting alternative to EQ in making mix elements ‘bed down’ and complement each other. Let’s look at some of the best.

Prior to Audiomatic, the ‘go-to’ character device in Reason was Scream 4, and it’s still massively useful, with valuable, unique capabilities. Yes, it’s called a ‘Sound Destruction Unit’ but not all its treatments are aggressive and screamingly obvious (sorry).

Try creating a Scream 4 on a track, but turn off the Damage section completely. That leaves you with the Cut section, a three-band EQ easily capable of generating lo-fi ‘phone’ effects (cut Lo and Hi and boost Mid) or the tubby ‘disco next door’ sound (boost Lo and cut Mid) all by itself. Meanwhile, the body section is a cabinet simulator; switch it on and it’s as if your sound is coming from a speaker, box or some kind of enclosure. The Type knob chooses between five basic cabinet types. Reso introduces ringing resonances, and Scale changes the apparent size (with big at far left and small at far right). Auto controls an envelope follower that adjusts Scale dynamically according to input levels. Unusual, but potentially useful!

If you’re liking what two-thirds of Scream 4 can do, by all means add in the Damage section too, or just use it on its own. For more subtle treatments, restrict yourself to the Tube and Tape modes (accessed via the unmarked Type knob). Then tweak the P1, P2 and Damage Control knobs to adjust the character and intensity of the effect. Tape mode with relatively high Compression and low Speed is, to these ears, a ‘dirty’ EQ/saturation that is easily as good as anything Audiomatic can generate. It’s brilliant for degrading fat disco drums and creating those super-saturated ’70s Bollywood vocals.

A similar result, though with a distinct character of its own, can be achieved with Reason’s Pulveriser device. ‘Squash’ compression, ‘Dirt’ distortion and a flexible filter are readily accessible and easy to separate or combine. What’s more, the Blend knob at far right allows you to do worthwhile parallel processing, setting a blend of dry and heavily treated signals. For even more about this great device, see the January 2012 Reason column.

Numerical Sound’s rack extensions might look quite conservative, but there’s currently nothing else quite like them on the Reason platform.

Sticking with bundled Reason devices, don’t rule out the Line 6 Guitar Amp for general roughening duties. Most of the presets are (understandably) guitar-oriented and too distorted, but it’s very easy to fix this. Just click on the Amp type display and choose ‘No Amp‘ from the pop-up menu. Then you’re left with just the character contribution from the various Cabinet models, which you choose just below. Some sound truly great on electric pianos, organs, and even vocals. There’s no way to adjust anything — all the other amp-related knobs are redundant now — but that’s sort of part of the fun. You can always EQ the channel anyway, to sculpt the effect.

Not just for guitars, the Line 6 devices’ cabinet simulations can be accessed independently of their amps.

Incidentally, the complement of five Amp and Cabinet models provided as standard in the Line 6 devices can be expanded significantly in a couple of ways. If you have a hardware Line 6 device attached to your computer via USB (and you’ve performed a few software authorisations and installations described in the Reason Help files) you’ll see its models appear in the lists. It’s the same if you’ve plugged in a USB iLok dongle containing a licence for the iLok version of Line 6’s POD Farm Mac/Windows software suite. A download of this can be had for a very reasonable $99 from www.line6.com.

Go beyond Reason’s bundled devices and your treatment options open out still further... A particularly good distortion is available from Propellerheads’ €39$49 Rotor, a nicely priced and brilliant-sounding Leslie speaker emulator. If you press the Stop button, you lose that spacious swirling of the rotating speakers and are left with just the valve distortion. The Crunch/Smooth switch sets the basic strength, then you use the Drive and Blend knob to hone it. Keep the Dry/Wet mix knob 100 percent wet unless you’re exploring parallel treatment possibilities.

A few other Rack Extensions can be pressed into use for grungy, overdriven sounds, too. KiloHearts’ €15$19 Faturator offers a good range of possibilities, while Softube’s similarly-priced Saturation Knob offers a quick but less flexible solution. Rob Papen’s RP Distort is excellent value at €29$35, and though many of its presets are rather in-your-face and include motion elements generated by the onboard LFOs, you can easily tease out some more naturalistic tones. Silence the LFOs by turning their Amount (Amt) knobs to the 12 o’clock zero-percent position. Then explore the many distortion varieties offered from the pop-up menu in the Distort section; they include a Cabinet and Tube simulator, Saturation and a Soft Limiter. The adjacent EQ and Filter can easily nuance the effect.

Character processing doesn’t always need to be about distortion. There’s a group of REs by the Canadian developer Numerical Sound that radically alters your sound using convolution technology. Their Tone Mutation Instruments RE includes guitar cabinet treatments but extends the concept to make it sound as if your audio has morphed with a range of acoustic instruments. The preset ’35 Piccolo’, for example, does an uncannily good ‘headphones on the train’ impression, while the likes of ’01 Deep Reggae Bass’ are reminiscent of underwater hearing. The partner device, Tone Mutation Vocals, adds vowel colours and animal resonances (‘Walrus vocalization’, anyone?) and isn’t only useful for vocal processing. Another RE, RiVerb Up-Front Spaces, is responsible for some of the most convincing room treatments you’ll ever hear. The ambiences on offer radically alter the quality of your original audio without adding obvious reverb tails, so you can use them liberally to add life and spatial context to parts of your mix. At €55$69 or €65$79 each these REs aren’t the cheapest, but some users might find them indispensable.

A nice production touch is to sometimes fade in and out of a really strong character treatment, rather than just abruptly enabling and disabling it. If you’re using only one effect device, with a wet/dry mix knob, it’s easy — just automate it. But for effects chains, and devices with mix knobs, an elegant way to do it is with the excellent, free, Morfin XF Crossfader Rack Extension by Groovy Melon.

Normally, insert-type effects are fed from an Audio Track or Mix Channel device’s rear ‘To Device’ sockets. The output from the final effect goes back into the ‘From Device’ sockets. It’s a localised insert loop. Now, assuming you already have your desired effects already set up, here’s how you cable the crossfader. 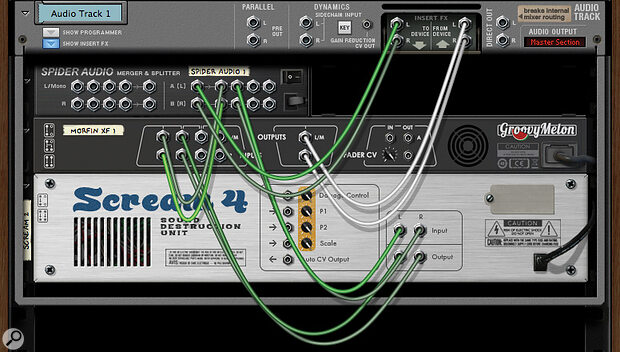 The setup for using a Morfin XF crossfader to fade effects in and out looks a little complex, but is easy to do in practice.

1. Locate your Mix Channel/Audio Track and effects. Then, holding down the Shift key (to disable automatic cabling) create a Morfin XF Crossfader and a Spider Audio Merger & Splitter device nearby.

2. Flip the rack, and draw new cables from the To Device socket to the A/B inputs on the Spider Audio.

3. Draw cables from the first of the Spider Audio splitter outputs to input I on Morfin XF — that’s the dry feed.

4. Next, draw cables from the second splitter outputs to the first effect device’s audio inputs.

5. Now find the output from the last effect device (currently feeding the From Device socket) and draw cables from here to input II on Morfin XF — the wet feed.

6. Finally, connect Morfin XF’s output to the From Device sockets.

Back on the front of the rack, you should now be able to use Morfin XF’s crossfader to smoothly blend between dry (position A) and effected (position B) feeds. Groovy!