There's more to loudness than meets the ear — and after years of research, TC know more about it than most.

Audio metering has evolved at a snail's pace. The VU meter dates back to 1939, the peak programme meter (PPM) so beloved of European broadcasters first appeared in 1938, and the 'digital sample meter' so common on DAWs today appeared in the late 1970s! Long-lived as these meters have been, none is particularly appropriate or competent for the modern digital age, and all can be considered obsolete!

Controlling programme levels by monitoring peaks — which is what the PPM and the 'digital sample meter' encourage us to do — results in frustrating variations in perceived loudness and the need constantly to adjust the replay volume when changing programme sources or types. The VU meter gives a better idea of average level, but still doesn't allow consistent matching of subjective volume, and gives no warning of excessive peak levels. Instead, what we need is a reliable quantitative measure of perceived loudness, plus an accurate true-peak meter (which shows the actual peak level of a fully reconstructed waveform), so we can avoid overloading oversampled D-A converters and data-reduction codecs, and enjoy a consistent listening level across broadcast channels, programmes and music tracks.

Thankfully, both of these ideals have finally been achieved, after nearly a decade of research and development, with the publication of the ITU-R BS.1770 standard. This has already been embraced by most other international standards bodies, and embodied within their own metering guidelines, such as the EBU's R-128 and ATSC's A/85. Consequently BS.1770-compliant metering is now appearing on mixing consoles, DAWs, metering plug-ins and hardware meters, and their use is now being mandated by leading broadcasters and production companies around the world. Even Apple's iTunes has adopted something very similar for its own loudness normalisation (Sound Check) facility.

The front panel of the LM2 hardware device.

Representatives of TC Electronic played an active role in the committees and working groups that developed BS.1770, and the company were amongst the first to offer practical implementations, such as the LM2 unit reviewed here. This performs two primary functions, the first being a stand-alone, 1U, rack-mounting meter providing real-time loudness, 'true peak' level, and loudness range (denoting the effective dynamic range) of a stereo input signal. This information is presented clearly on an LCD screen, and the data can be logged and accessed in more depth via a USB-connected computer, using TC Electronic's impressive Icon software. Secondly, and most usefully to broadcasters, the LM2 can automatically adjust the input signal level to conform to any loudness specifications (the EBU R128 target loudness recommendation is -23LUFS).

The LM2's internal 48-bit, fixed-point processing maintains resolution regardless of how much signal attenuation is applied to correct the loudness value, while ultra-fast peak-limiting protects against overloads when the gain has been boosted. Rear-panel XLRs cater for balanced stereo analogue line-level inputs and outputs, with digital interfacing accepted in the form of AES3, coaxial S/PDIF, and optical ADAT or S/PDIF over TOSlink. In addition to a USB computer port, there is also a word-clock input, a trio of DIN sockets (labelled 'Com'), and the usual IEC mains connector for the built-in universal mains supply (with a mains on-off switch).

The no-nonsense front panel provides ample control of the LM2, while the rear panel sports a range of digital and balanced analogue I/O.

The front panel has a power standby button in the top left corner, and a Type 1 PCMCIA slot (remember those?), which accepts memory cards of up to 2MB for backing up system settings and installing firmware updates. The main display provides a true-peak stereo bar-graph level meter and various status LEDs, along with an indicator for the measurement standard in use (eg. EBU R-128), and two selectable measurement values. Options include Integrated Programme Loudness, Sliding Loudness, Loudness Range and Off, the defaults being Loudness Range and Integrated Programme Loudness (measured in LUFS, or loudness units referred to full scale!).

Three buttons, which are located to the right of the display and labelled Pause, Home and Set Gain, do as they say. The Pause function is provided because the assessment of loudness can be skewed by unusually loud or quiet sections, so it is useful to pause the measurement during such periods. The Home button toggles between the default 'home' measurements screen and the 'stats' displays, which provide values for measured programme loudness, the highest loudness value encountered, the loudness range and the maximum true-peak level. The Set Gain button enables the automatic preset loudness-level adjustment process. Pressing the Home and Pause buttons together cancels and restarts the loudness measurement displays, while pressing the Home and Set Gain buttons together restores unity gain.

Nine more buttons and a rotary encoder to the right of the front panel configure the unit, with Recall and Store buttons to access eight factory presets and 99 user memories. The Edit menu button is where all the interesting stuff is to be found, starting with which two parameters are displayed on the LCD. The target loudness level can also be set here, along with which loudness standard is employed (BS-1770, Leq(K), R-128, and others). The manual explains the detail and ramifications of each parameter very well.

The LM2 is very simple to use, and the large displays are easy to read at a distance, providing useful feedback on the objective loudness, and loudness range, of the programme. Although clearly aimed at the broadcast sector, the LM2 has a wider role, too, because there's no doubt that loudness metering is the way of the future for all audio outlets. Film, radio and TV sound mixers are already using loudness metering, and the music industry, too, is beginning to see the light… slowly. Interestingly, if you reference mixes to a loudness measurement rather than a peak level, hard limiting becomes extremely counter-productive, dynamic variation is welcomed, and all forms of music compete on an even field, regardless of genre. Hurrah!

The LM2's ability to automatically loudness-match source material as it's ingested into a play-out server or archive system is clearly extremely useful for a broadcaster, but it could just as easily be employed to ensure a constant listening level from speakers in a restaurant or shopping mall! It can also be used as part of a master-control or pre-transmission signal path to set a constant loudness level at the output, and then there's the logging aspect for analytical and quality-control purposes, too (see 'TC Icon Display' box). The LM2 is a unique product that is worth serious consideration for anyone making audio for video, radio or TV commercials, podcasts, Internet radio, or playlist production.

Most meter manufacturers, as well as high-end digital consoles and DAWs, are now beginning to implement BS.1770 metering. The TC Radar display is also available as the LM5D plug-in for Pro Tools (or the AM6 version for the cinema industry), as well as the LM2 and LM6 stereo and surround VST plug-ins (as well as being available separately, the former is supplied with the LM2 hardware). 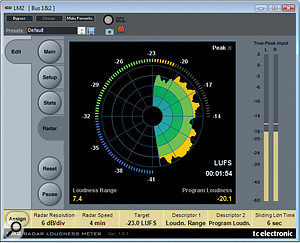 The distinctive radar display of the Icon software.

The supplied Icon software can be installed onto a Mac or PC (the latter also needing a bespoke driver), to access the LM2's real-time data in a very obvious and intuitive way. System configuration adjustments are a little quicker and easier to make via Icon than on the hardware itself, but the real benefit is the inclusion of TC's Radar display. This is a rotary loudness meter that shows the current loudness along with the past history. Each revolution takes four minutes (although this can be adjusted from one minute to 24 hours). The target loudness level is the junction between the green and yellow regions, so if the trace is showing a lot of yellow, the loudness is too high, and if it's all green, it's too quiet. An instantaneous loudness bar-graph with the same colour coding is shown around the periphery of the radar display, with the target loudness (0LU) at the top. This excellent system is very instinctive to use.

The LM2 hardware's internal data-log memory can store an entire week of data, which can be accessed via the Icon software and saved to the computer's drive as a simple text file. After importing into a spreadsheet, the time and loudness values can easily be converted to a chart to analyse long term trends and dynamic ranges.

The LM2 might seem to be a simple rack-mounting loudness meter, but actually it offers much more — especially when controlled from a computer running the Icon software and accessing the internal log files.