As its title suggests, Nexus is a drum & bass sample library from Zero‑G, produced by the mysteriously aliased Base Predator. Housed on a single DVD, the samples actually break down into a slightly lightweight 670 loops, all eight bars in length, and all fixed at a tempo of 170bpm. These loops are spread over all the usual formats. Well, nearly all. A quick glance at the included formats reveals a pretty major omission: there are no REX files. This seems a strange oversight, given that all the content is at a fixed tempo, even such a drum & bass friendly one, so flexibility straight out of the box is already feeling a little limited. 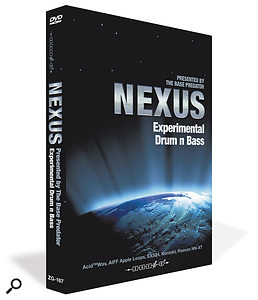 Let's leave this niggle to one side for now and press on. All the samples are grouped into 182 titled folders, construction-kit style, with each folder containing the finished mixed loop and all the component stems… oh, hold on. Start to explore the folders, and the next thing to hit you is the rather random nature of the content. Some contain 15‑20 loops, but others contain only one. After a quick count up, of the 182 'kits', 59 have only two or three loops included and 45 are just single, and often heavily processed, mixed‑down stereo samples. Bizarrely, even when the kits are broken down into more loops, what you get is a bit of a lottery. Some contain no drums, just a couple of synth loops, and others just fully mixed beat loops with a couple of variations or added snares. Thankfully, some contain a more traditional construction-kit breakdown, but it's interesting to note that even these don't include any single drum hits or drum slices — so rearranging or reprogramming will be time consuming.

Forgetting all about these problems and just concentrating on how the included samples actually sound, what's here isn't at all bad. True, there's nothing particularly ground-breaking (or truly experimental, strangely, given the title), but the beats roll along nicely and there's a strong, dark edge to some of the loops. Although things are pitched much more in favour of the rhythmic elements, there are some really nice, atmospheric synth and melodic touches to be found. I must admit, however, that the rigid adherence to the 170bpm tempo, while keeping things organised, does stifle the creative options available.

Overall, Nexus has been a bit of a frustrating collection to review. It's by no means terrible, it contains some solid production, and there's an obvious feel for the genre. It has been let down, though, by poor planning and organisation. The absence of any REX files, lack of proper breakdowns, stems or hits for each finished loop and its random, scattergun approach to content rather restrict the collection in terms of its overall usefulness. Oli Bell